Príncipe Island: a tiny biodiversity wonder in the Gulf of Guinea

In early 2015, Fauna & Flora International (FFI) travelled to the island of Príncipe following an invitation from the Príncipe Trust Foundation (PTF) to discover whether the two organisations could work together to enhance the conservation of the island’s outstanding biodiversity. Now one year later, a collaboration agreement has been signed, a conservation strategy defined and two conservation managers hired. 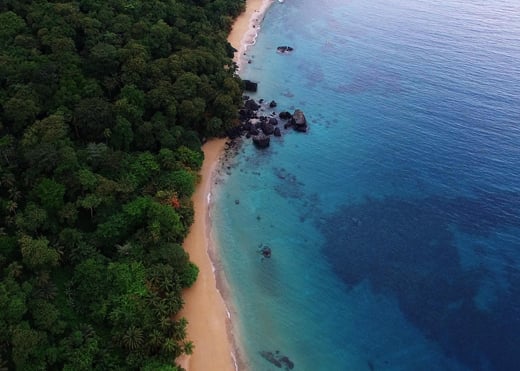 Príncipe is an old volcanic island in the Gulf of Guinea, off the west coast of Africa. It belongs to the archipelago of São Tomé & Príncipe, Africa’s second smallest nation, which lies just slightly north of the equator and just east of the Greenwich Meridian Line. Santo Antonio, the world’s smallest capital, is now our new home.

As you fly in from São Tomé to Príncipe, the vastness of the ocean highlights how isolated the island is, which explains why many of the species found here are endemic (found nowhere else on earth) – both on land and in the sea. Seen from the sky the island displays a lush green wilderness with a magnificent topography of volcanic features. The forest is omnipresent and in most places falls directly into the ocean from high cliffs with only a few narrow sandy beaches dotted around.

During our first week, we met with PTF staff, HBD Príncipe – the commercial tourism venture that PTF works closely with – and regional ministries to discuss conservation priorities and areas for collaboration. The meetings were punctuated with guided explorations to different sites of the island. 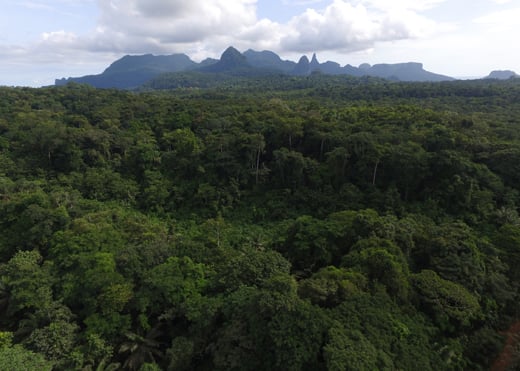 The historical past of the island is visible everywhere, either as ruins overgrown by vegetation or the old roças (Portuguese colonial plantations) that are currently under renovation for eco-tourism. A substantial part of the island is inaccessible – in particular the southern side which is also the Ôbo Natural Park.

The forests of São Tomé and Príncipe are among the world’s 200 most important biodiversity areas, and Príncipe is by far the more green and pristine of the two. Príncipe’s mountain forest is covered with vines, moss and orchids as well as abundant and extremely diverse ferns. Unfortunately, nearly all of the lowland forest has been disturbed and altered by human activity, and there are many introduced crop plants dating back to colonial times such as cocoa, oil palm, coffee and tropical fruits.

All the frogs found in Príncipe are endemic along with two bat and one shrew species. São Tomé and Príncipe are in the top 25% of 218 Endemic Bird Areas worldwide for their rich species list and, more recently, both island’s forests were officially listed as Important Bird Areas in Africa.

Birds found here include the brightly coloured Príncipe golden weaver, grey parrot, Príncipe sunbird, Príncipe malachite kingfisher and the famous (but rare) Príncipe thrush. The mona monkey and African civet have both been introduced to the island.

Boat rides with the marine team around the island, a few dives and multiple snorkelling sessions have also given us some initial insights into the island’s marine and coastal ecosystems. 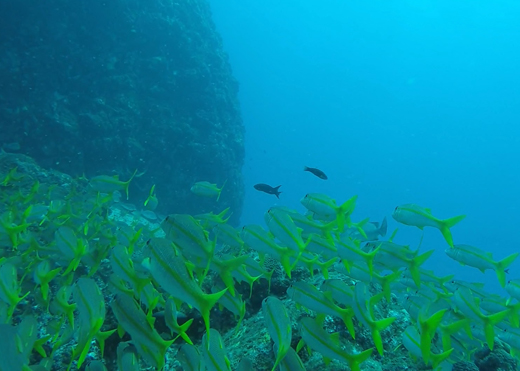 An expedition by the California Academy of Sciences in January 2016 indicated that roughly one third of the fish species are endemic. Mangroves were spotted in three areas, but these appear at first glance very small. There are several interesting sites for further exploration where rivers, both small and large, enter into the ocean.

Most sandy beaches are important breeding grounds for three turtle species, hawksbill, green, and leatherback. The last eggs of the season were laid during these past few weeks and the hatching season is now in full swing.

Over the next two years, we will be working closely with PTF and government agencies such as the park authority, the Biosphere Committee, and the departments of Forestry, Agriculture and Fisheries to implement a conservation strategy while strengthening internal capacity on the island.

So far we have explored the different forest habitats, including several drone flights over the canopy, and have spoken with local communities in exploratory surveys about the use of forest products. We have met with the park authority, forest department and the head of agriculture several times. We were fortunate enough to join the local community in a reforestation effort to celebrate Forest Day and we are beginning to help map out and plan tourist forest trails in Ôbo Natural Park.

Another area of work has been engaging with the traditional honey collectors known as queimá vunvú, which means ‘bee-burners’ in the local dialect due to the destructive practice of burning wild African bee (Apis mellifera adansonii) colonies to collect honey. Park officials have reported that this practice has had a significant impact on the abundance of bees within the park, as the honey collectors don’t respect the park limits.

We are helping in the efforts to promote sustainable bee keeping and supporting pollinator conservation work as a way to reduce the pressure on wild bees. Additionally, we have been mapping wild colonies of Apis which is often found in the impressive Ocá trees, and searching (without success so far) for the stingless bee which has only a few very old records.

Príncipe is part of the marine biodiversity hotspot of the Gulf of Guinea due to its high levels of endemism despite low overall species richness. Coral cover is limited in the tropical eastern Atlantic, as this area is at the extreme margins of the ecological tolerances of hard corals, and this reef hotspot is among the 10 most threatened in the world. Nevertheless, an interesting diversity of species can be found underwater. 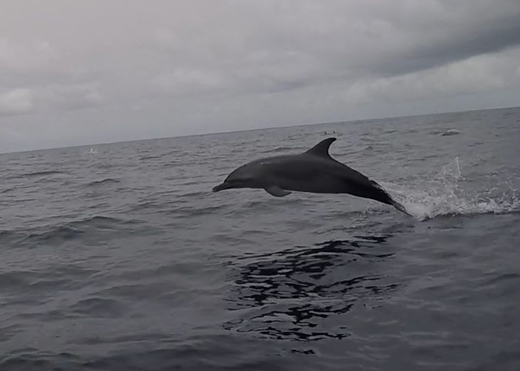 Exploring the island’s marine and coastal ecosystems. Credit: An Bollen/FFI.

Over the last three years, there has been a significant decrease in poaching both on land and at sea due to a large team of dedicated guards patrolling; however overfishing and unsustainable practices, underpinned by factors such as post-harvest loss and poor preservation techniques, remain a problem. Fishing is an important livelihood on Príncipe, with a third of the island’s people engaged in either catching or selling fish.

There is therefore a need to protect Príncipe’s marine environment – both for conservation and livelihood reasons. FFI will be working with partners to set up co-managed marine protected areas with local fishing villages and work towards more sustainable fisheries, in close collaboration with the regional government. Exciting times ahead!

Co-written by An Bollen and Felipe Spina.