How did we end up like this? In the 1950s as the new plastic technology emerged and the mass production of everyday plastic products began, it was heralded as saving us all time and energy. No more washing up. Just use plastic plates and throw them away!

At least we know better now though, don’t we?

Perhaps not. A colleague told me that during her recent stay on the west coast of the US, the hotels she stayed at (which were all mid-range) used disposable plates and cutlery as standard in their restaurants.

I’m not out to demonise plastic as a material. It has many important uses and benefits for society; it plays a vital role in modern medicine, has allowed untold innovation, it improves food hygiene, and its low weight has reduced carbon emissions associated with the distribution of a wide range of items. Indeed, the much celebrated idea of a circular economy would allow all plastics to be recaptured, reprocessed and reused – reducing the need for virgin plastic production (and hence the draw on fossil fuels from which they are made).

I could live with plastic that was designed to be reused multiple times rather than used once and thrown away, thus extending the useful life of this material. After an extended lifespan and multiple reuses it might even be then converted back to oil.

However, at present we are several steps away from a circular economy, and plastic production, use and waste is booming. Recycling is important, where it happens. But much of our plastic still ends up in landfills, where it will persist for centuries. More worryingly, lots of plastic escapes from any waste management and eventually ends up in our rivers and seas, where it will stay for centuries.

There is growing evidence of the danger plastic may pose to marine wildlife, with many species known to be affected by this pervasive problem.

Fauna & Flora International (FFI) has been addressing marine plastic pollution for several years, and in particular has been instrumental in raising the profile of the insidious and less well-known microplastics. These tiny particles are what is left when larger plastic items break up over time, but they also enter the ocean directly as so-called ‘microbeads’ (such as are used in facial scrubs), nurdles (raw pre-production plastic pellets), and the fibres from synthetic clothing that enter waterways from domestic washing machines. 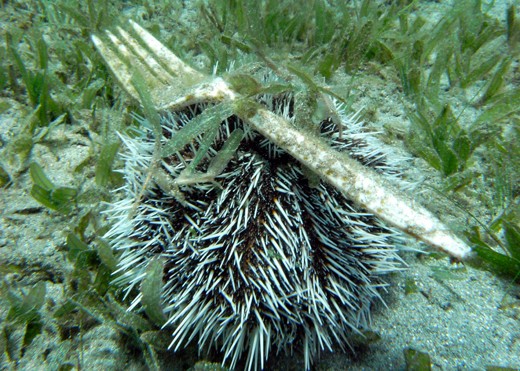 Plastic litter in our seas is a pervasive problem. Credit: Kay Wilson/Indigo Dive Academy St. Vincent and the Grenadines.

There is also growing evidence of microplastics being eaten by a range of important species at the bottom of the food chain (including seafood species such as mussels and langoustines). This is particularly worrying given that these particles are thought to attract and concentrate background pollutants such as DDT, and concerns are now being raised about their potential to provide a vehicle for these harmful chemicals to enter the food chain.

A tide of plastic

The problem we face is twofold. First, it’s hard to capture plastic so it doesn’t pollute waterways and seas (and can be harnessed for re-use within a circular economy) – particularly in countries where effective waste management strategies are missing.

Second, the sheer volume of plastic being used every day presents an overwhelming challenge in itself; the scale of this waste is so vast that, even if only a small percentage escapes to the sea, the pollution load is enormous. 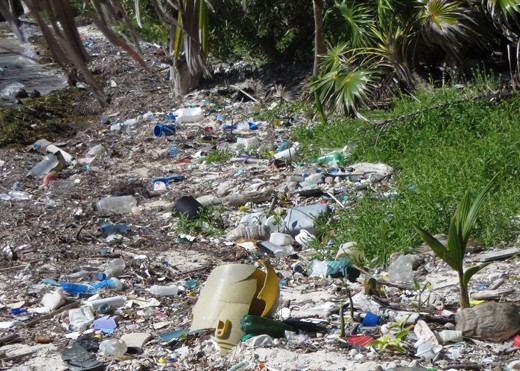 Even remote beaches are awash with plastic litter, which drifts in on ocean currents. Credit: Sarah Rakowski/FFI.

Last week Seas at Risk published a report highlighting the scale of disposable plastic use across Europe. The findings were shocking: 46 billion plastic drinks bottles a year. 16 billion coffee cups (which of course are lined with plastic, and cannot currently be recycled). 36.4 billion plastic drinking straws. The list goes on.

Single use plastics are one of the main sources of beach litter; perhaps because they are designed to be used “on-the-go”. If only 1% of these items are not binned or escape the waste management system, that’s still 1 billion individual pieces of single use plastic that could enter European waterways or seas every year, and a similar problem is being described across many parts of the world.

So what should we be doing? Of course we must dispose of our waste responsibly. Make sure you recycle your plastics (and separate them properly when you do so), and when you can’t then make sure they end up in a bin and not in the sea.

This means being careful about what you flush away (cotton buds and wet wipes, for instance, both contain plastic and both end up in our seas and should never be flushed). It also applies to cigarette butts (a little known but important source of plastic pollution), which are often discarded on the street, where they can be washed into waterways and onwards to the sea.

Furthermore, we all need to collectively reduce our use of these single use plastics. They are not necessary and alternatives do usually exist. Use your refillable drinks bottle. Remember to take your reusable cup when you get your coffee (it will be cheaper too, in many outlets). Ask for your drink to come without a plastic straw. All these are easy.

However we also need systemic change. Not so long ago, we were used to plastic bags being doled out free with our shopping. Nowadays, many countries have put a stop to this, and yet we cope – it isn’t that hard to live without them.

I hope that we will see a similar shift for other single-use items, with innovations and incentives that will make it easy to live without this amount of disposable plastic in our everyday lives.

Maybe the plastics we do use will be effectively captured and reused multiple times throughout their life, reducing the overall plastic footprint on our planet. I hope so. In the meantime I’m off to buy some lunch that comes in a paper, not plastic, bag…

Sign up to stay up to date with all the latest conservation news and updates, including our work to prevent plastic pollution.