The Myanmar snub-nosed monkey Rhinopithecus strykeri is proving once again that the world’s remoter regions still hold surprises and need our urgent protection.

I first heard about this exciting new discovery when I met Frank Momberg in the Fauna & Flora International (FFI) office in Phnom Penh in 2010, before the discovery was common knowledge. In fact it was a well kept secret at the time, so much so that Frank refused at first to tell me what it was he wanted me to go to Myanmar and attempt to photograph. It was a need to know situation. I argued that as the person tasked with getting the first photographs I was in a need to know position. How could I come up with a plan, or even consider whether it was possible, without first knowing what I was looking for? Frank relented and showed me the draft paper describing the species. 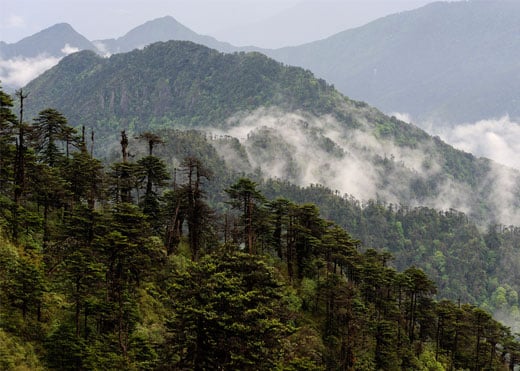 I saw at once that it was quite distinct from the other known snub-nosed monkeys. The one image he had, showed a recently hunted individual, dead unfortunately, but that is usually the way: new species are often identified from hunters’ trophies. This species appeared completely black with a strange drooping crest falling over its face.

“So where does it live,” I asked. “What are its habits? Does it come to the ground often?” Frank had no idea. But these are all crucial questions that needed answers, the starting point for working out how we might get photographs. What is not commonly understood is that many of the wildlife images that appear in books are taken of at least semi-habituated animals that can be approached to allow photography and whose habits are known.

Capturing images of elusive and rare animals is much harder, if not almost impossible. The saola, a forest antelope discovered in 1992, has still only been photographed in the wild twice; the large-antlered muntjac, discovered in 1994 wasn’t photographed in the wild until 2007; while other species known to exist still remain unphotographed. With the saola and the muntjac the only images were made on camera traps. It seemed that the Myanmar snub-nosed monkey was another candidate for a camera trapping programme. 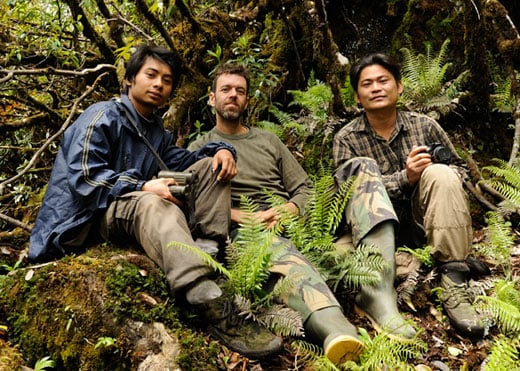 This was why I was concerned as to whether these monkeys spent much time on the ground. If they didn’t, our chances of getting a photograph were very slim. Even if they spent most of their time on the ground it would still be difficult. According to Frank, the population was perhaps fewer than 300 individuals scattered through some extremely remote and rugged terrain. Snub-nosed monkeys are renowned for living in difficult places. I wasn’t very hopeful of succeeding with this project. But keen to go to Myanmar and try,  I didn’t mention this to Frank.

As with all such camera trapping programmes, the first port of call is with the hunters who know the most about these animals. Although the monkey was now described by science, no scientist had laid eyes on a live one. What we knew about them – which was precious little – had come from hunters.

My first visit to the region was foiled by heavy snow. I learned something about the monkeys from hunters during this trip and managed to train our local counterparts from BANCA as to how it might be possible to photograph them once the snow had melted. These outcomes were sufficient to make me happy that it wasn’t a waste of time. My counterparts had been keen and learned quickly. We had discovered that the monkeys liked to eat bamboo shoots. These were positive things. With good counterparts the job is much easier, and knowing that the monkeys came to ground gave me some hope that they might walk through a camera trap. I planned a return trip in April to initiate a camera trapping programme. 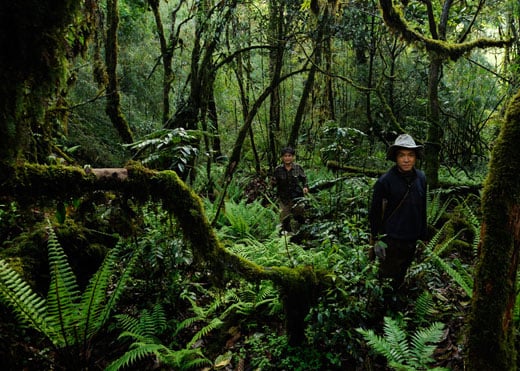 I was involved in the programmes that first photographed Saola and large-antlered muntjac and had had some success in Indonesia with the first pictures of Sumatran rabbit and in Cambodia with the hairy-nosed otter, but my feeling was that getting an image of a Myanmar snub-nosed monkey could take years. It looked even more unlikely when my April trip was cancelled and the BANCA team had to go to forest without me.

In May I made it back to Myanmar and accompanied the team into the mountains to check the cameras they had set. I was excited about this. The first set of camera trap images collected by the team from the April visit had revealed a host of great images – 27 species including red panda and tufted deer. I guessed that even if we didn’t get the monkeys there would be some noteworthy stuff on the cameras. 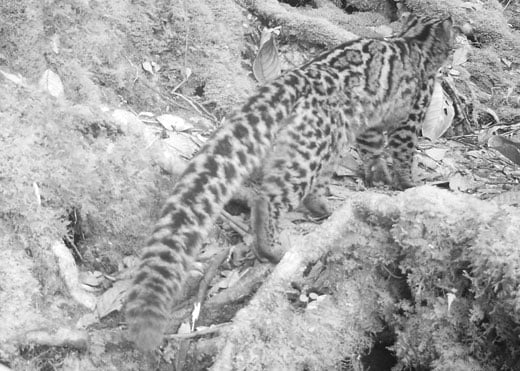 By May the rainy season has started in the mountains of northern Kachin. It was fairly miserable in the snow, but I was dreading being constantly wet in this treacherous landscape. I wasn’t disappointed. Over the first 48 hours of the trek it rained for 48 hours. I spent a night wearing Wellington boots and waterproof gear in a leaking tent pitched at an angle so that the water collected at the end farthest from my head. My booted feet were submerged all night. The rain didn’t let up for most of the two weeks we spent in the field, but we managed to get back to the cameras and check the results. I was impressed by how well the team had done. This was difficult terrain for camera trapping, but they had made intelligent choices with camera placements.

In the old days I used to collect film from the cameras and have no idea what we had until back in town. Now with digital technology we look at the results immediately. Camera #8 showed takin, a rare Himalayan bovid – I think photographed for the first time in Myanmar. Camera #6 had caught a Shortridge’s langur, another scarce primate found in these mountains. But it was camera #4 that caused Saw Soe Aung and Thet Ngai Aung, my two counterparts, to whoop with joy. As the rain fell they checked the cameras to discover a blurred image of a snub-nosed monkey. It was a very poor photograph indeed, but it meant a lot and I felt a great deal of relief. I now knew that the monkeys were moving terrestrially and we had a chance of photographing them. 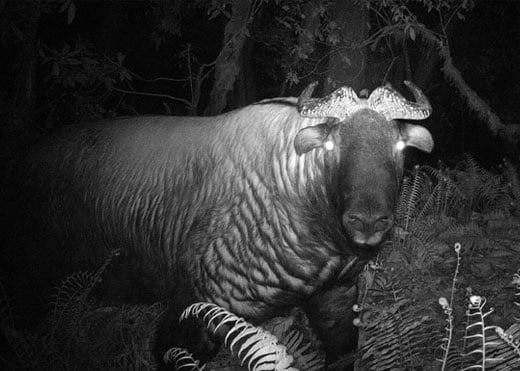 We celebrated that night in camp with three-in-one packet coffee and local cheroots. In the morning the rain had stopped and we made the trek up to the highest placements at almost 3,000m in the rhododendron forests. Thet had run ahead in his eagerness to check the cameras. I heard his shout from a few hundred metres away and Saw and I scrambled wildly through the low branches to reach him. ‘Snubbys!’ he cried as we arrived. 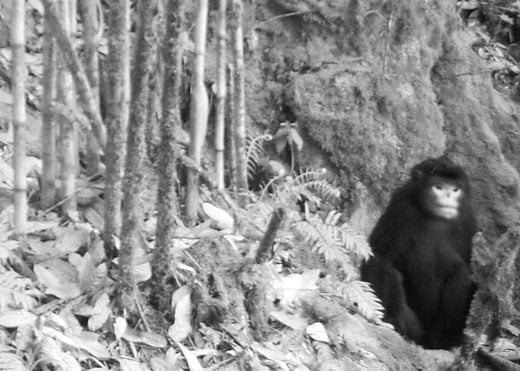 And there on the camera were the first clear pictures of the Myanmar snub-nosed monkey, some even showing mothers with infants. The best shot, I thought, showed a monkey in the far corner of the frame, crouched like a gargoyle. This image perfectly summed up both the magical nature of the forest, and the fragile nature of the monkey and its precarious future. 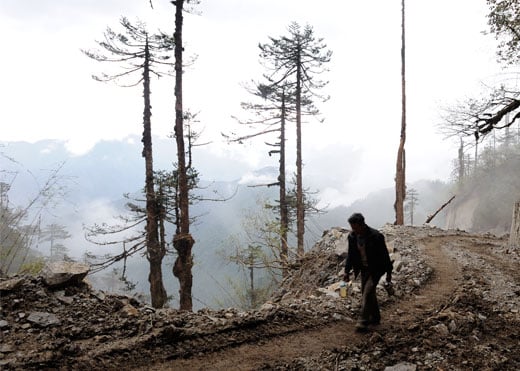 Of course, getting the photographs is just the beginning. We need to find out where the monkeys are – this is how camera trapping can help. Then we need to protect those areas. It might seem that the monkeys are relatively safe in their remote mountainous domain, but this is far from the case. Extensive logging operations by Chinese companies in search of rare timbers are cutting roads into the highest areas. During our trip we documented roads as high as 3,200m – probably the upper limit of the snubby’s range. These new roads give access to hunters who are actively seeking primates for use in traditional Chinese medicine. Together with our partners, FFI helped discover the Myanmar snub-nosed monkey, now we need to help protect them.