Back in 2002, a beautiful but little-known primate in the remote mountains of northern Vietnam caused something of a conservation sensation.

Named the cao vit gibbon by the Indigenous People after its distinctive call, this charismatic primate and its songs were once so familiar that it featured in many local poems.

Tragically, however, increasing pressure from humans meant that the cao vit gibbons and their haunting songs gradually disappeared from the forests until, eventually, scientists and conservationists around the world feared that they may be extinct in the wild. Then, in 2002, an expedition by Fauna & Flora International’s (FFI) Vietnam programme rediscovered a population of 26 individuals in Trung Khanh district, Cao Bang province.

While this event shocked and delighted conservationists all around the world, it was much less of a surprise for the people living there, who could still hear the gibbon’s song echoing in the mountains as they farmed in the valleys near the forests. 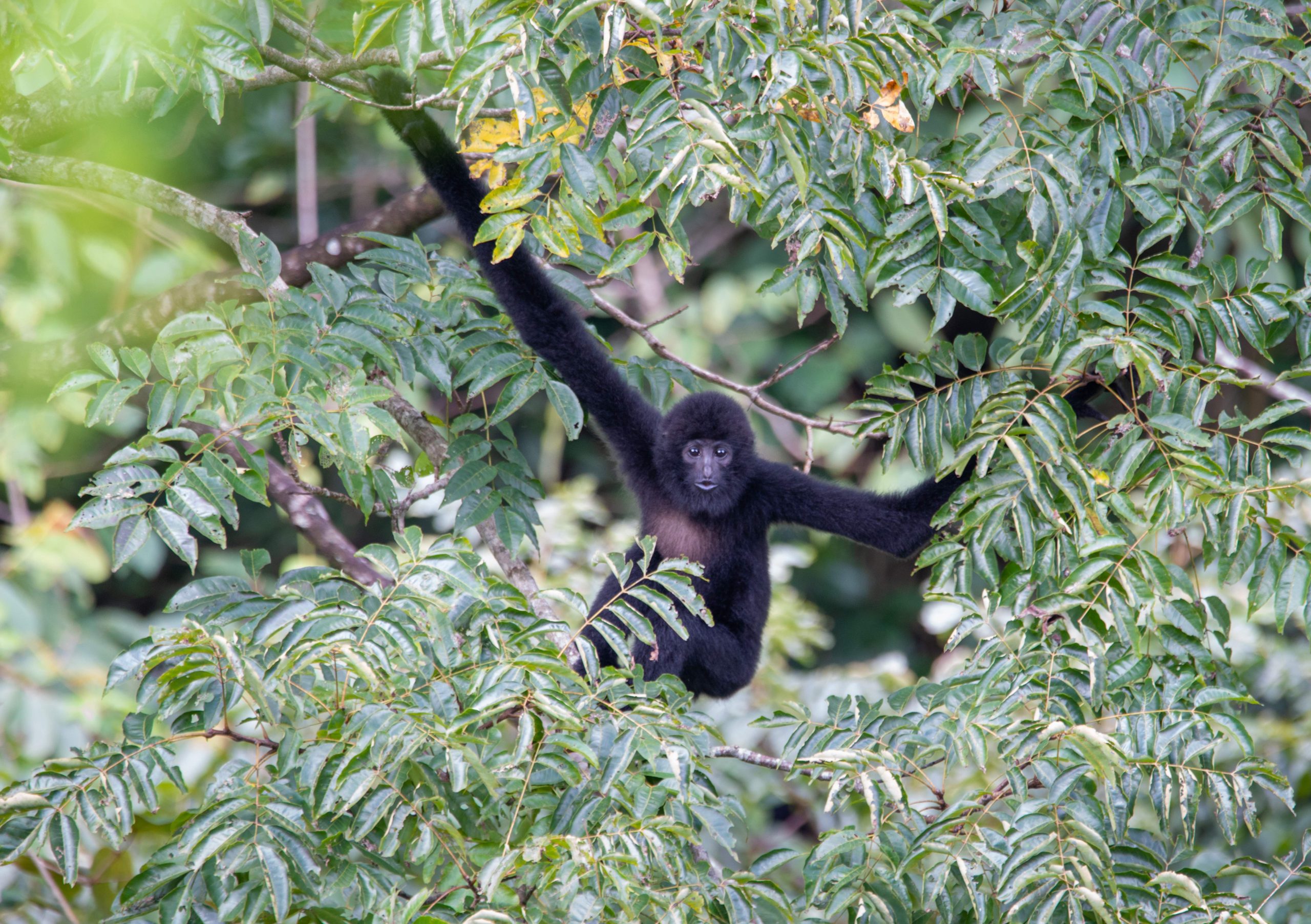 Nevertheless, it was clear that urgent action was needed to ensure that this precious population of cao vit gibbons did not disappear like the others before it, so FFI immediately launched a conservation project with great hopes and ambitions for the future of this species.

To ensure success, a comprehensive plan was drawn up that included setting up a community patrol and monitoring team; embarking on further research and surveys; promoting the establishment of a protected area; addressing the ongoing threats to the gibbons and their habitat; setting up livelihood support for the community; and, last but by no means least, raising people’s awareness of the threats to these primates through carefully planned, long-term communication activities.

In the two decades since the remarkable rediscovery of the cao vit gibbon, FFI has been steadfastly singing its own message: protect the cao vit gibbon and the other wildlife with which it shares its forest home!

But how to change the perspectives of local people about the immediate benefits of forest products, and foster a local sense of pride about the fact that this is the only place in the world where the cao vit gibbon can be found? To address this important challenge, the project team has cleverly and creatively integrated these messages into many different communication activities aimed at communities living near the gibbon’s habitat, including adults, students and local authorities.

One such activity that has proved very effective is the Cao Vit Gibbon Conservation Festival, which has attracted nearly a thousand local people to participate since it was first held in 2020.

As the name suggests, this is a real festival for people living locally that features many entertainment activities, all infused with important conservation messages. 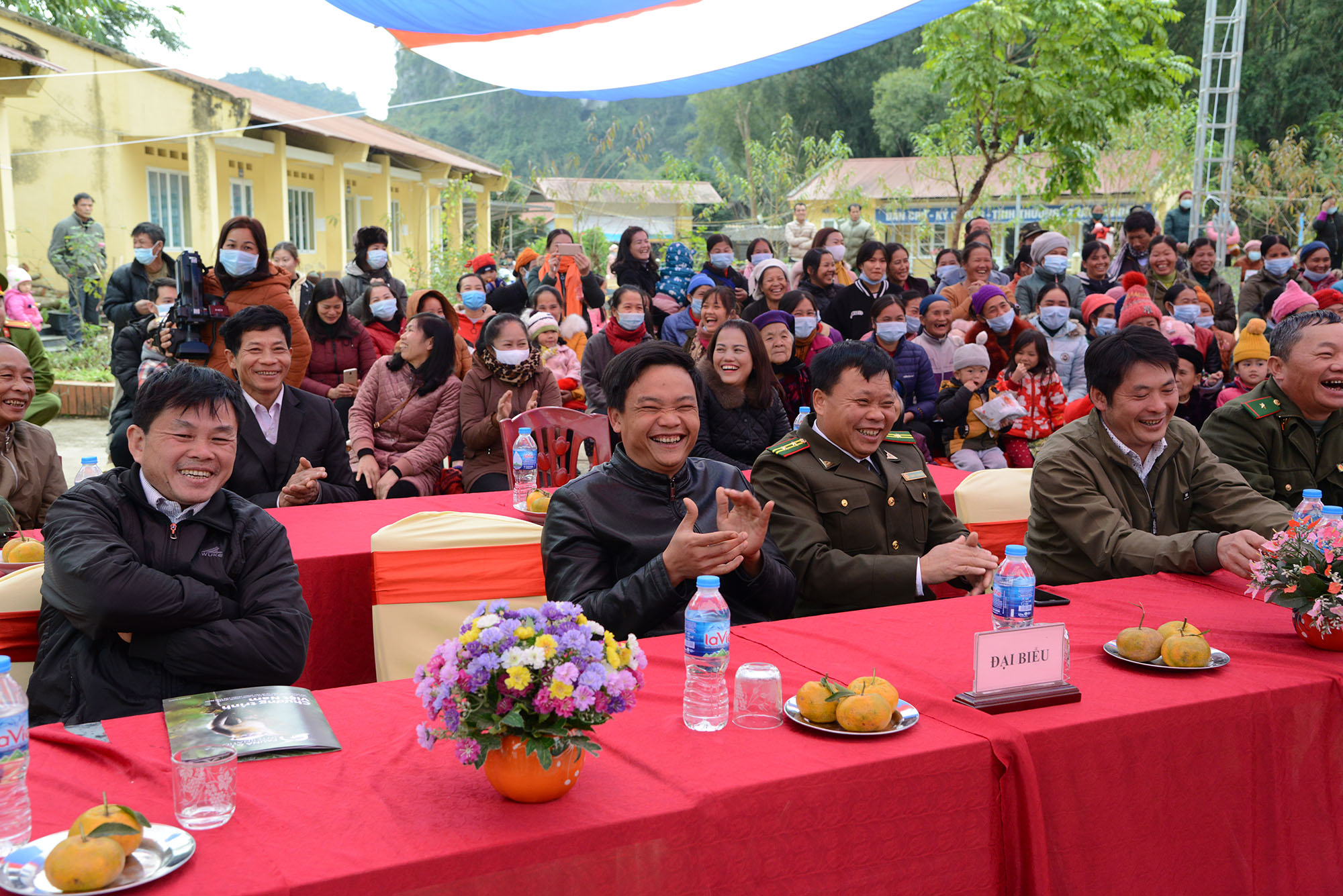 While Covid-19 might have put the brakes on this kind of activity in many countries around the world, Vietnam’s rapid and careful management of the outbreak meant that, happily, two Cao Vit Gibbon Festivals were able to go ahead as planned.

In 2020, the festival was held at Phong Nam commune in December – when people had stopped working in the fields – and was attended by more than 450 people, while a further 350 people joined the festival at Ngoc Khe commune, which took place in April 2021 to coincide with favourable weather.

The 2020 and 2021 festivals were resounding successes, and the team hopes to replicate the model for some of its other conservation projects in Vietnam. 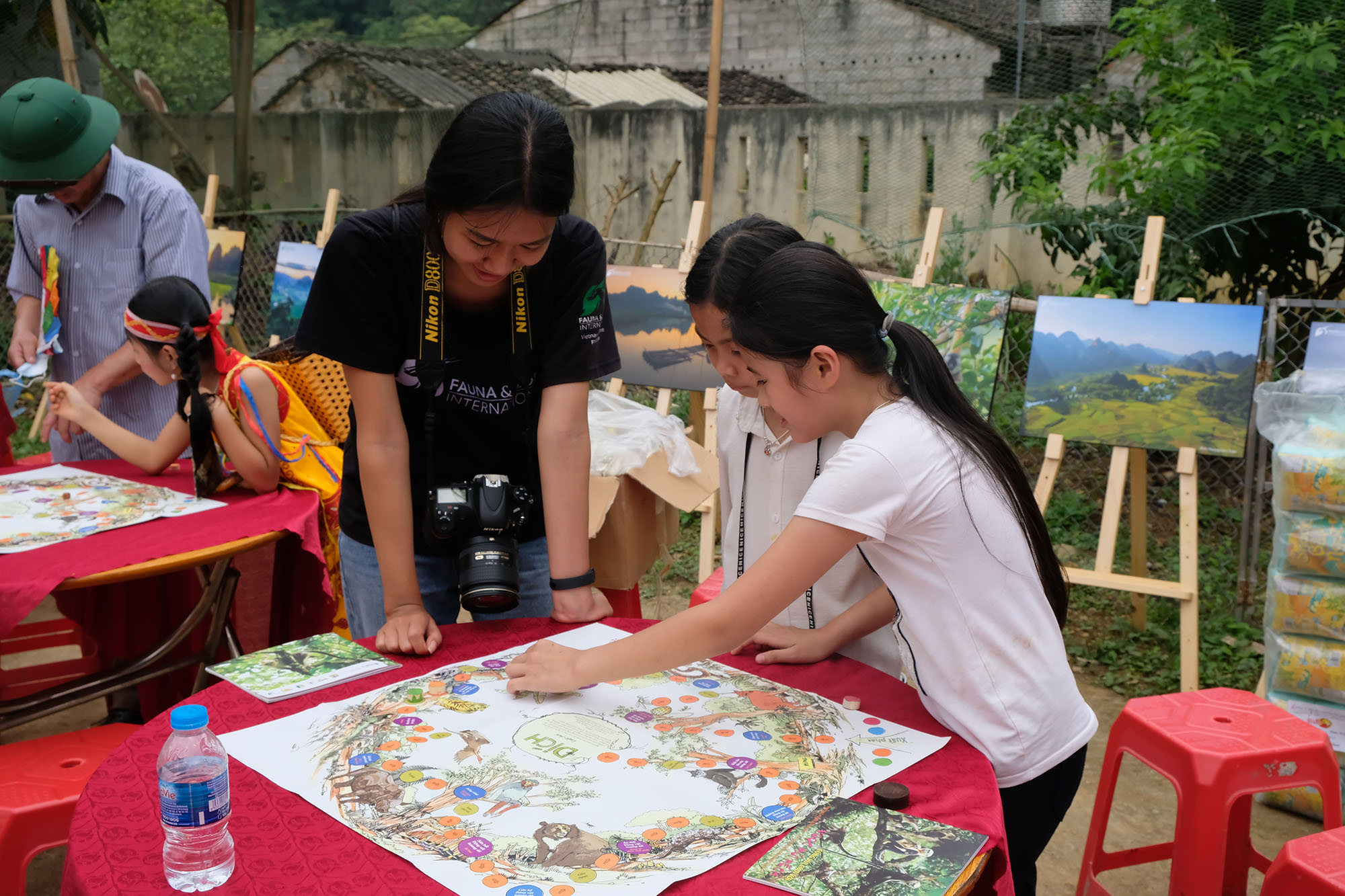 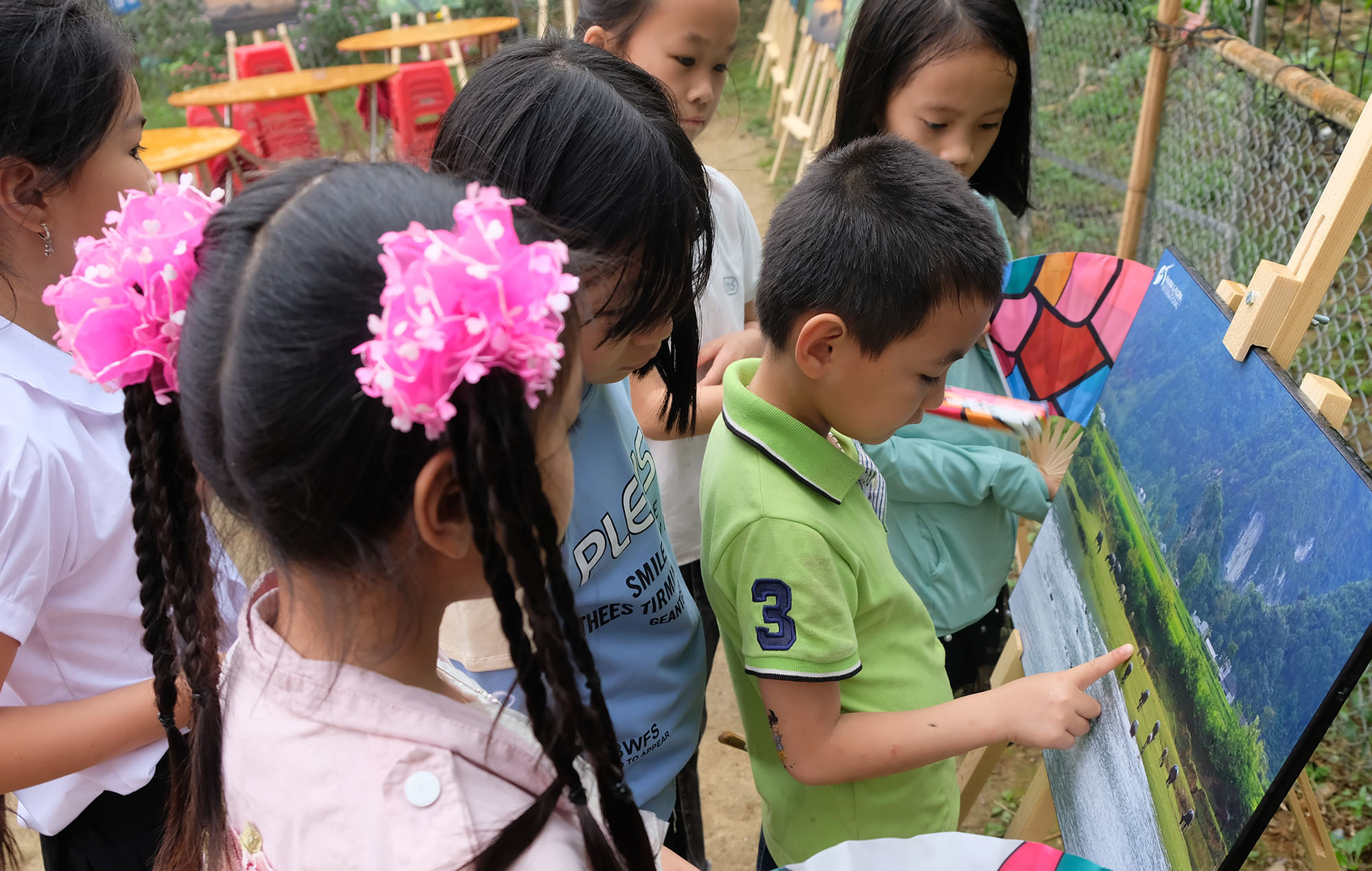 The event was a real festival for children. Credit: FFI 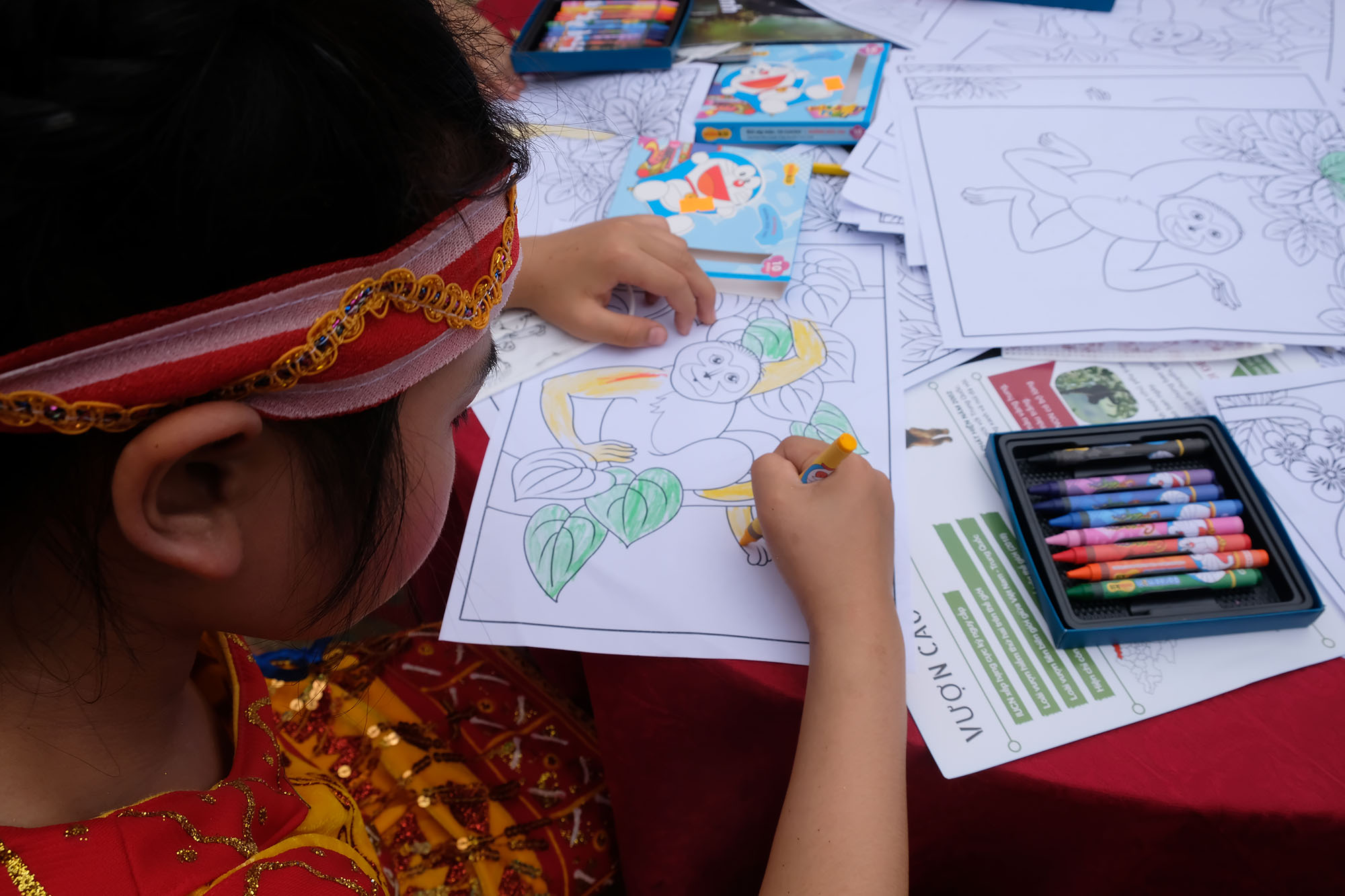 A painting area was set up at the event. Credit: FFI

A painting contest held before the festival attracted a large number of students at the commune’s primary and secondary schools. The quality of the artwork was amazing, and the heartfelt messages inspired the judges. 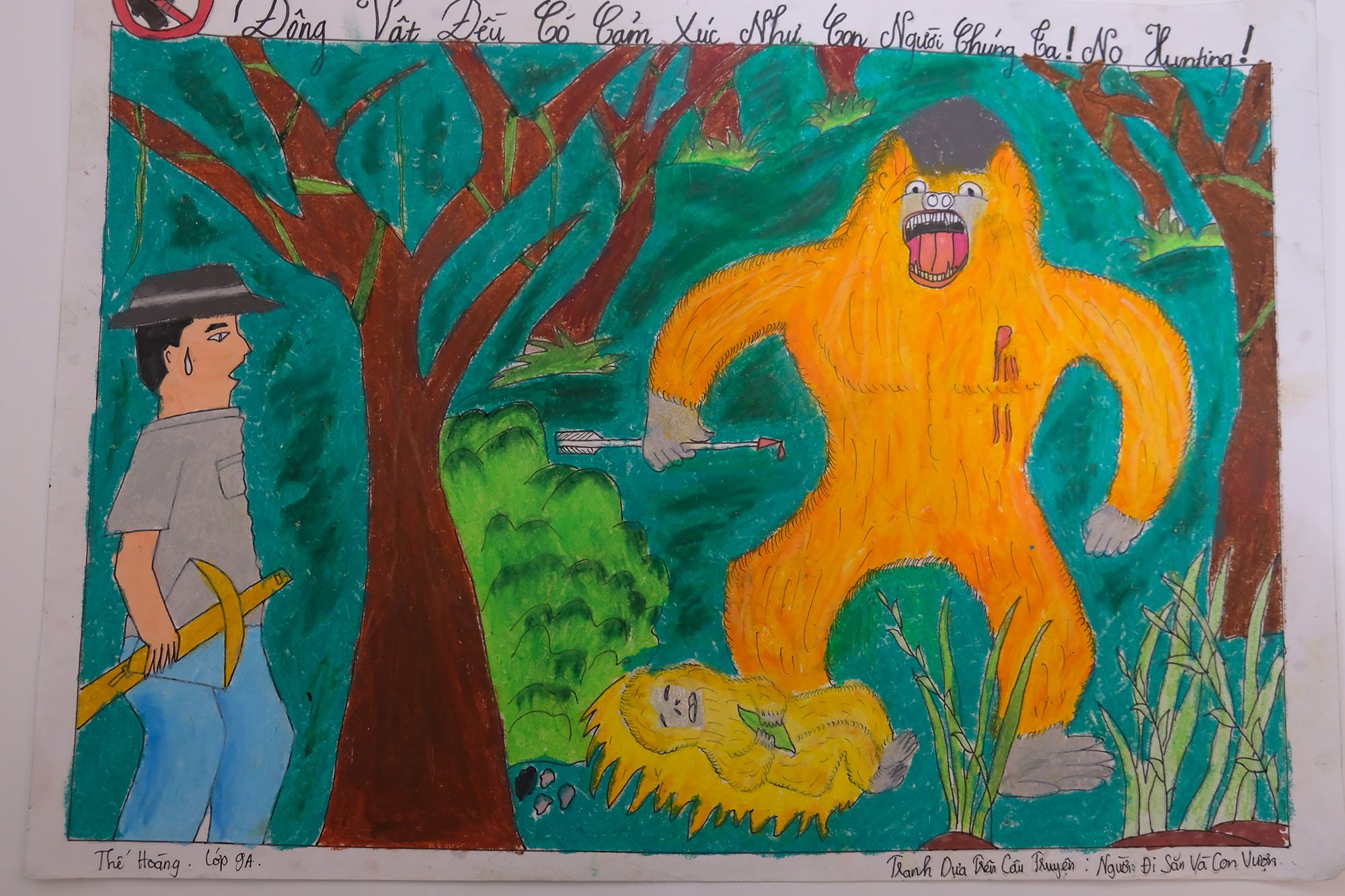 A student’s painting with a passionate “no hunting” message. 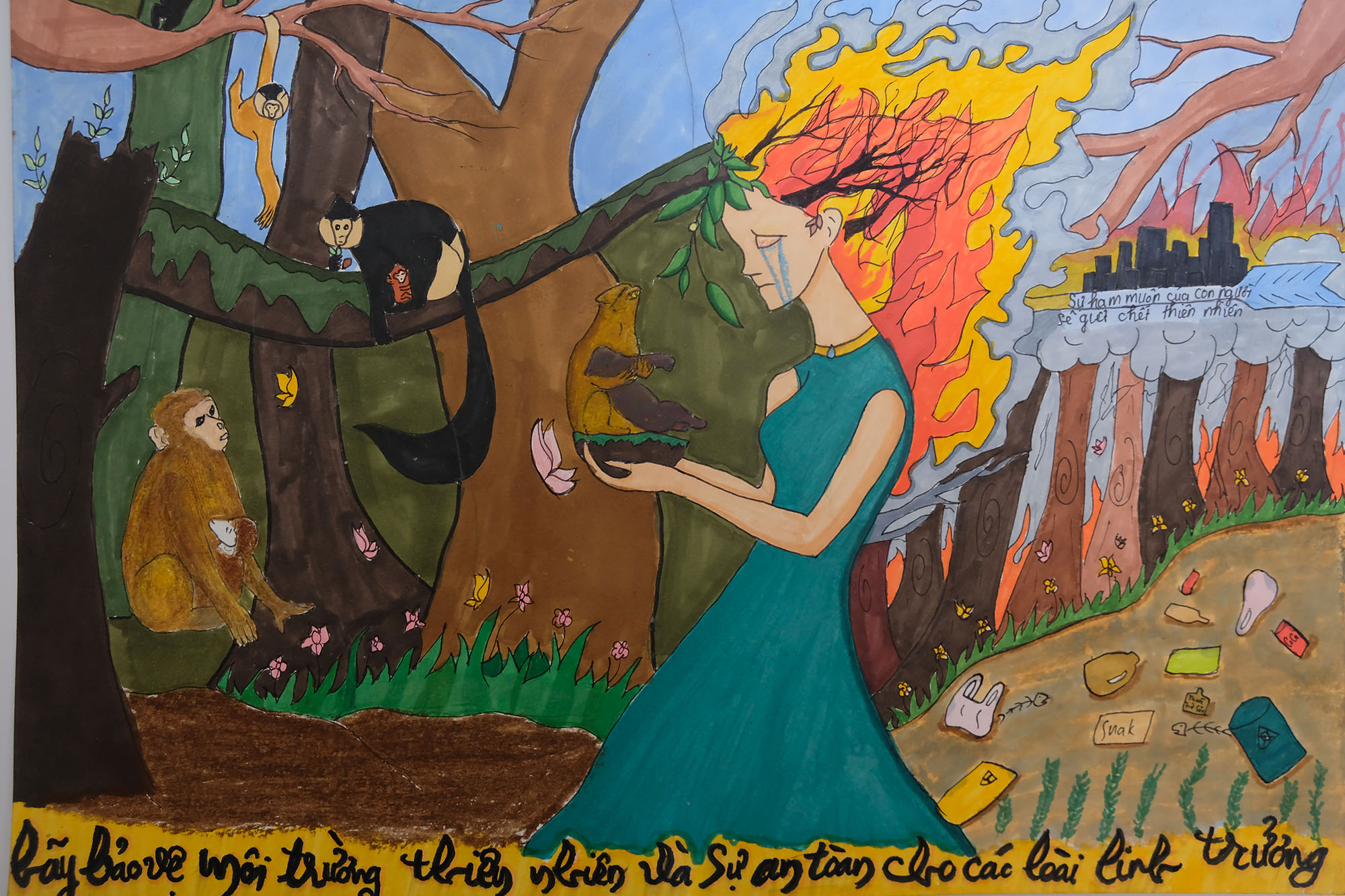 A student’s painting portraying an important message about protecting nature.

Adults also participated enthusiastically in folk games. One contest that focused on sharing knowledge and key messages about protecting cao vit gibbons, wildlife and nature reserves was a key activity of the event. 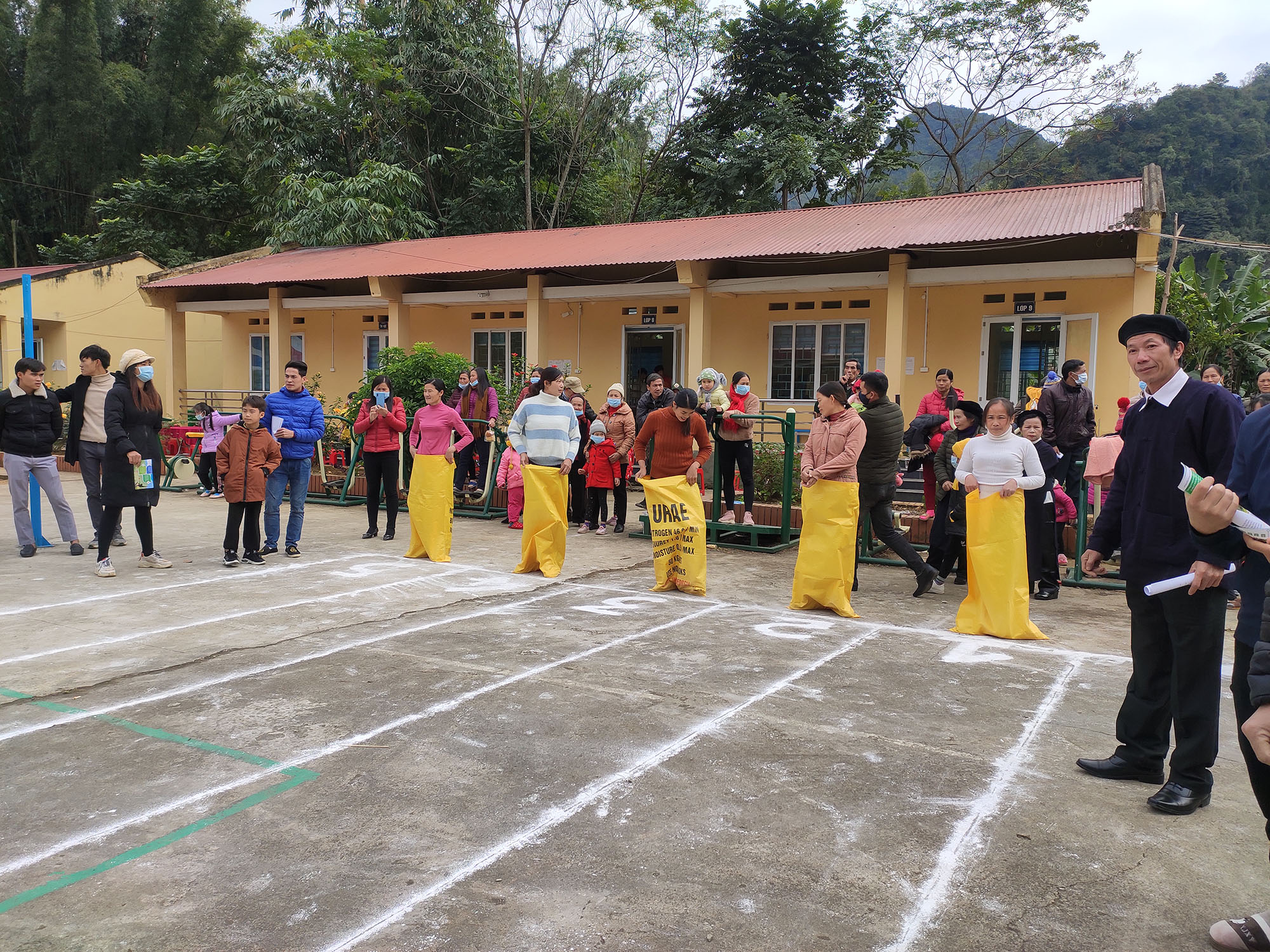 Adults joined in the fun too, taking part in folk games. Credit:FFI 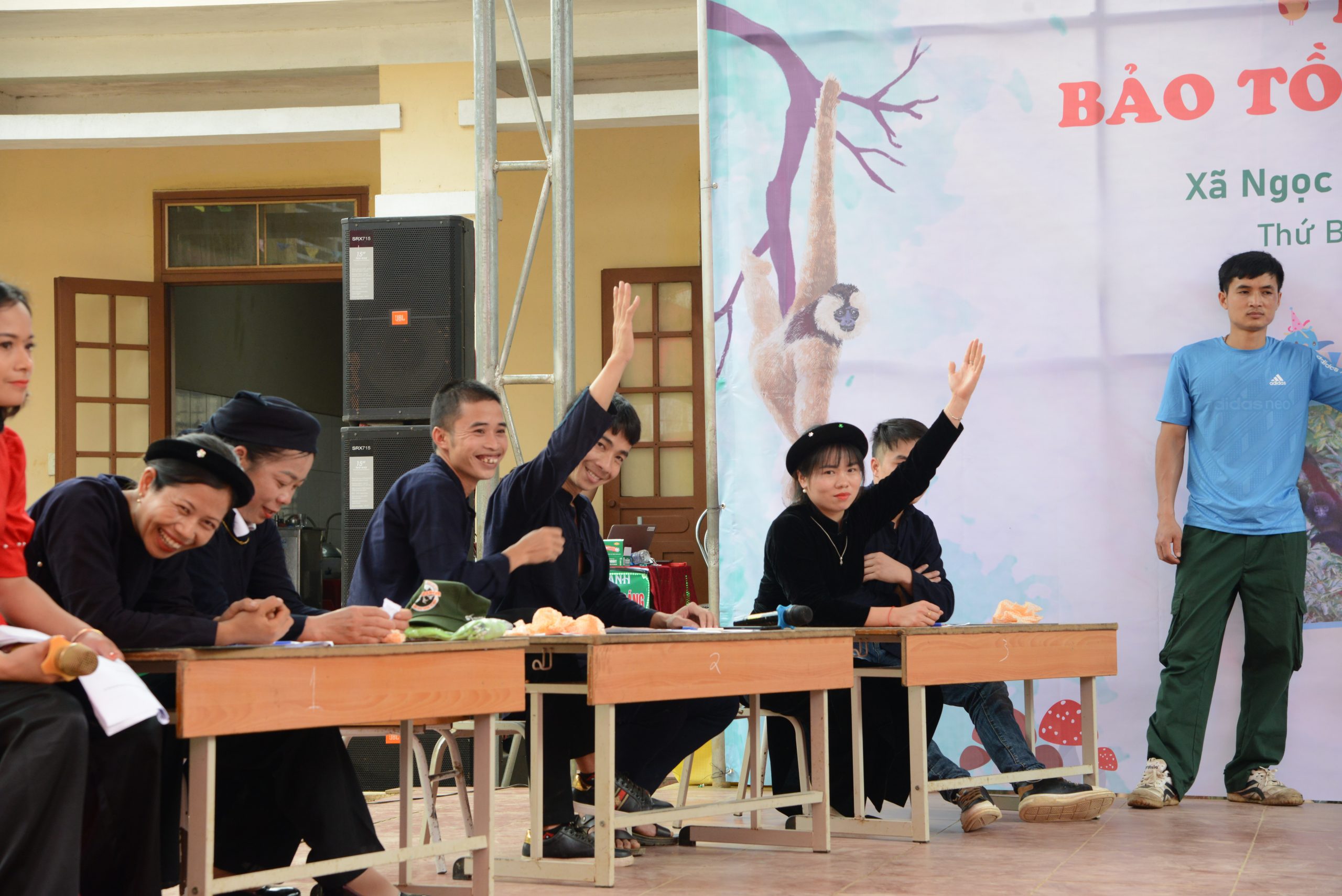 The teams were excited to participate in a conservation knowledge contest. Credit: FFI 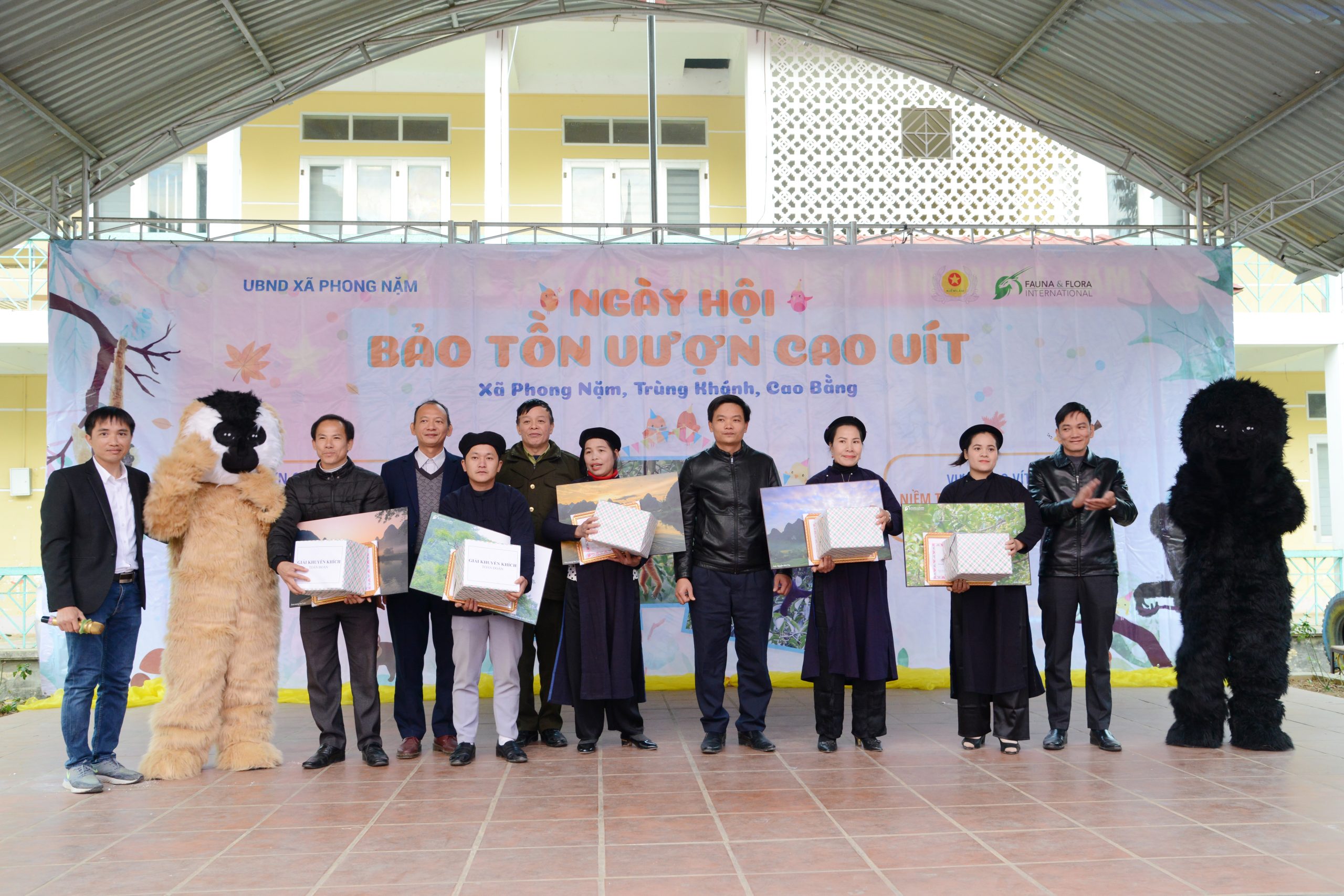 Community teams received prizes handed out by a pair of gibbons, who decided to join the event. Credit: FFI 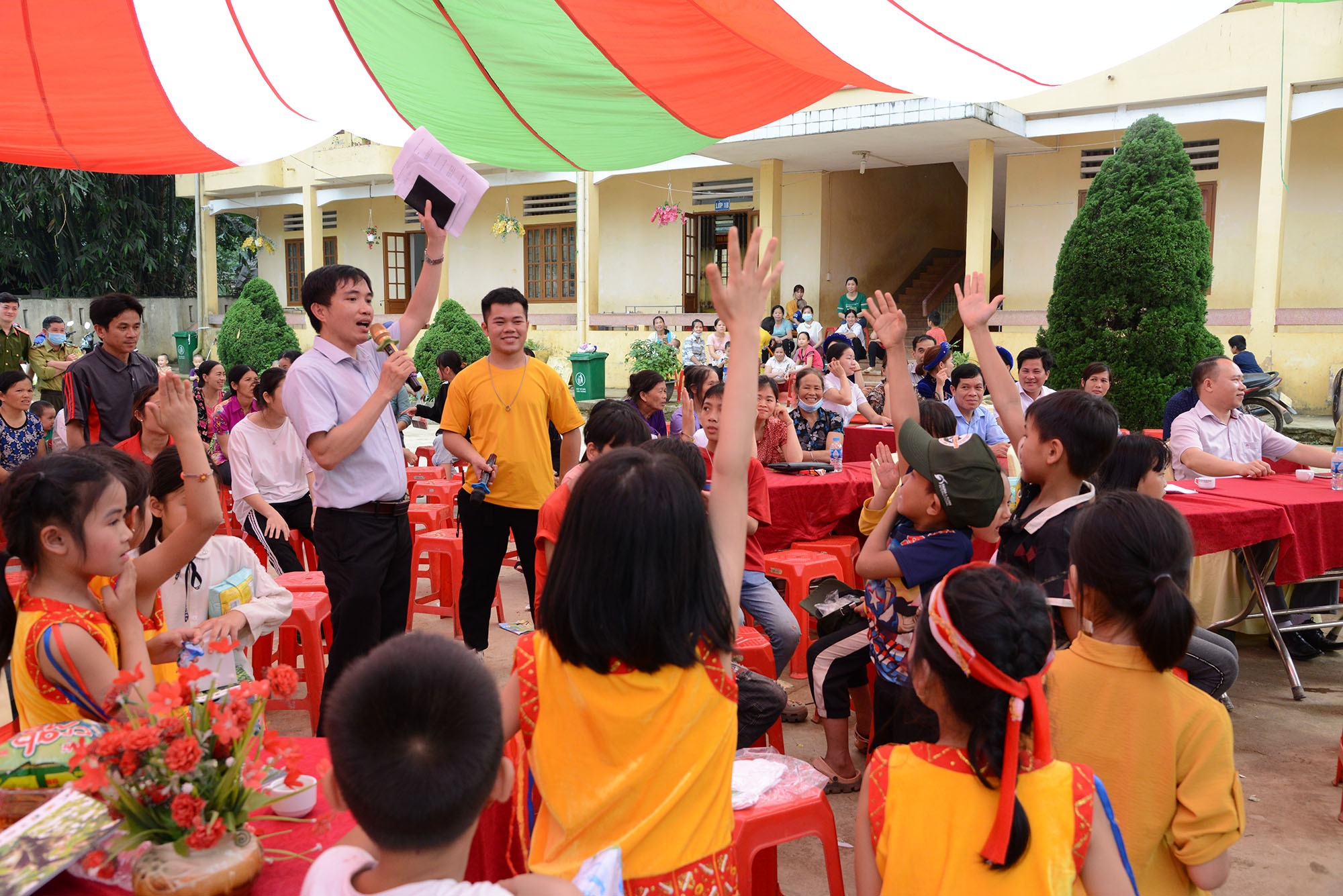 The joy of children was clear to see. Credit: FFI

Vietnam is home to 25 primate species, of which 11 are critically endangered and five can be found nowhere else on Earth.

This vital work would not be possible without the incredible support of our members and donors. IUCN Save Our Species has been providing much-needed support for FFI’s cao vit gibbon conservation project, alongside Arcus Foundation and the Disney Conservation Fund.

The cao vit gibbon is among the world’s most threatened apes, clinging to survival by its hooked fingertips in a small, fragmented forest on the border between Vietnam and China.