Dan Challender, Co-Chair of the IUCN SSC Pangolin Specialist Group has been involved in pangolin conservation since 2007, when he conducted the first study of the Sunda pangolin in captivity. He recently completed his doctoral research on ‘Reforming international wildlife trade interventions in CITES’, in which he used pangolin trade as a case study. He now works for IUCN and continues to Co-Chair its SSC Pangolin Specialist Group.

Pangolins, also known as scaly anteaters, are one of the world’s most peculiar groups of animals. They have no teeth and, as their alternative name implies, feed predominantly on ants and termites, which they consume with the help of a remarkably long, sticky tongue.

They are the only truly scaly mammal, covered in individual, overlapping scales made of keratin (the same fibrous protein that forms human fingernails and rhino horn), and have a tendency to roll up into an armour-plated ball when threatened. Unfortunately, whilst this defensive strategy can protect them from all but the most tenacious of large predators, including tigers and bears, it is little help against their deadliest foe – humans.

It is we who are pushing Asia’s four pangolin species (which together occur all the way from Pakistan, eastward to China, and south throughout the Indian subcontinent and Greater Sundas) closer and closer to extinction.

Although pangolins have traditionally been hunted for local consumption across Asia (a practice that continues today), the main threat facing them now is the commercial hunting and poaching driven by the illegal international trade.

Little is known about the population status of pangolins in the wild, particularly in the rainforests of Southeast Asia. Being primarily arboreal, they are rarely caught by camera traps. In fact, one of the first pangolin photographs recorded by Fauna & Flora International (FFI) was in a Sumatran tiger’s mouth. 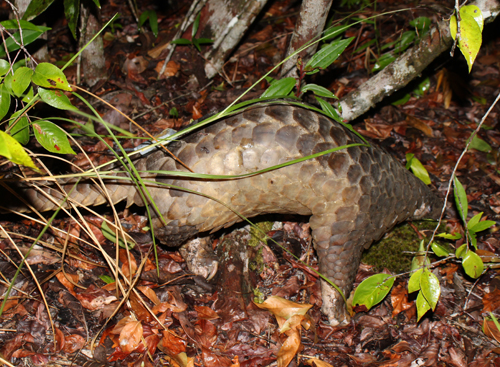 Pangolins are nocturnal and arboreal, making them difficult to study. Credit: Prak Chanthy.

Despite this lack of information and the difficulties in surveying wild pangolins, hunters seem to have no such trouble in finding them, judging by the staggering size of some of the illegal shipments that are seized. For example, 14 tonnes and then 24 tonnes of frozen pangolin were confiscated in southern Sumatra in 2008. A fully-grown pangolin weighs just 5–7 kg. You do the sums.

All pangolin species are listed on Appendix II of the Convention on International Trade in Endangered Species of Wild Fauna and Flora (CITES) and in 2000, they received additional protection in the form of a “zero quota” export ban, and they are strictly protected by national legislation in virtually all Asian countries. Despite these theoretical safeguards, in practice the rampant illegal trade continues to flourish.

This typically takes place between Southeast Asian countries such as Indonesia and Malaysia, or China and Vietnam. Pangolin meat is eaten as a luxury and the ground-up scales are used in traditional medicines, in the belief that they can, for example, improve blood circulation and cure skin diseases.

The trade is now estimated to involve tens of thousands of animals a year, and although all pangolin species remain understudied, this level of trade is thought to be unsustainable. Consequently, pangolins are in urgent need of conservation action in the next few decades if they are to be saved from extinction.

From neglected to celebrated

Thankfully, pangolins have recently begun to receive some attention. In June 2013, the IUCN’s Pangolin Specialist Group held a four day meeting at Wildlife Reserves Singapore to produce a plan for saving pangolins.

That is welcome news, but it comes not a moment too soon, and much remains to be done. This includes identifying potential hotspots where healthy populations may exist, determining local population sizes, and assessing the impact of trade on local populations – which is where FFI comes in. 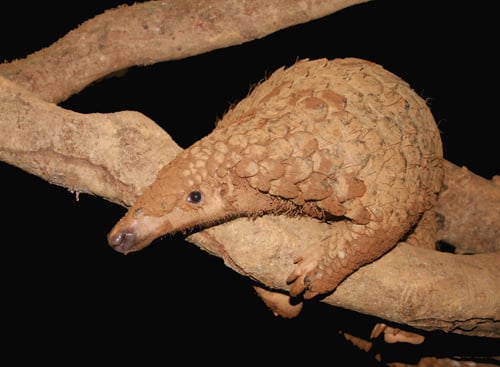 FFI is uniquely placed to act on conserving pangolins, as well as other species in illegal trade. It works in the demand countries, such as Vietnam, and has collaborated with TRAFFIC, the wildlife trade monitoring network, in supporting the government’s newly-issued guidelines on awareness-raising to promote “no consumption and trade of wildlife and wild plants.” In Cambodia, meanwhile, FFI work has released and radio-tracked pangolins in the forest.

FFI also works in supply countries such as Indonesia, where much of the illegal trade in Asian pangolins originates. In Sumatra, for example, FFI has an established presence and years of experience in tackling tiger poaching in forests that are also considered to be of high importance for pangolins.

The Endangered Sunda pangolin is still present in protected areas such as Kerinci Seblat National Park and Ulu Masen in Aceh, both long-term FFI project sites. Here, in addition to monitoring tigers, the FFI team also keeps one eye on the pangolin trade, as it is suspected that Kerinci Seblat could harbour a significant population.

There are some encouraging signs. Created by The Royal Foundation and led by The Duke of Cambridge, the United for Wildlife partnership brings together seven global conservation organisations, including FFI. Pangolins were among the species singled out at a recent two-day International Wildlife Trafficking Symposium, organised by United for Wildlife ahead of the London Conference on the Illegal Wildlife Trade, a high-level summit attended by heads of state and government ministers from 50 countries.

This means that pangolins are now being mentioned in the same breath as some of the world’s most iconic endangered species, including elephants, rhinos and tigers, and that’s a start.

This is an edited extract taken from the July 2014 issue of Fauna & Flora magazine. You can receive our magazine annually by joining Fauna & Flora International today.

The world's most trafficked mammal

Pangolins are on the critical list - over a million are estimated to have been taken from the wild by poachers since 2000.

Please support FFI today to help stop pangolin trafficking. Unless we act now we will lose the Sunda pangolin for ever.

Dan Challender, Co-Chair of the IUCN SSC Pangolin Specialist Group has been involved in pangolin conservation since 2007, when he conducted the first study of the Sunda pangolin in captivity. He recently completed his doctoral research on ‘Reforming international wildlife trade interventions in CITES’, in which he used pangolin trade as a case study. He now works for IUCN and continues to Co-Chair its SSC Pangolin Specialist Group.