Painting a brighter future for gibbons in China

Ji Tianyou was introduced to me one rainy afternoon in Haikou City, Hainan Province, China.

A teenage boy looked at me with a shy smile. “Hi, I’m Tianyou,” he said. I asked myself why this name sounded so familiar, and then it hit me: “You must be the author of that famous gibbon painting on FFI’s website!” I said. Tianyou smiled in agreement, pride showing in his eyes. 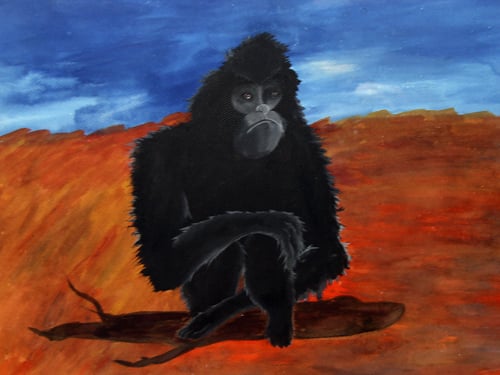 Discussing his Hainan gibbon painting, he took me back to the time of his childhood. When he was first introduced to the Hainan gibbon, he was a 5th grade student in primary school. It was 2006, and FFI staff had come to his school to carry out some environmental education outreach work.

The project was based in communities near Bawangling National Nature Reserve, and aimed to improve awareness, change values and attitudes, and engage local people in the sustainable use of natural resources to conserve gibbons and their habitat.

“The first time I ever saw gibbons was in those pictures we were shown; I never knew there were such incredible creatures living in the forest right next to my home,” Tianyou told me.

Tianyou is from Qingsong Township, directly adjacent to the Bawangling National Nature Reserve. There are eight Li or Miao ethnic minority communities in the township, who were identified as exerting the greatest pressure on gibbon conservation due to villagers’ activities in the forest, such as illegal hunting, illegal logging, over-harvesting of non-timber forest products, and the encroachment of rubber plantations.

Local people were living in poverty. They had little formal education, depended heavily on dwindling natural resources, and lacked awareness of gibbon conservation. Enhanced patrolling and law enforcement in the reserve had failed to halt or even decrease the threats, but instead had reinforced long-standing antagonism between the nature reserve management authorities and the local communities. 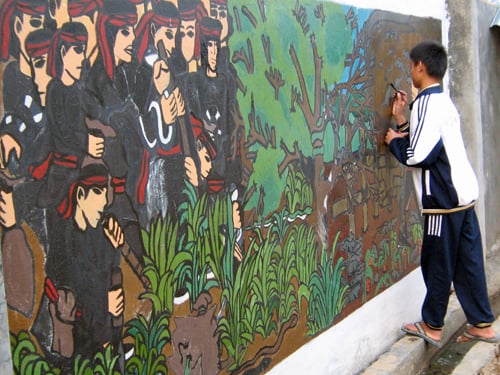 Tianyou and his fellow students drew gibbon conservation murals on the school wall with the hope of inspiring more students to follow their lead.

In 2009, FFI held the fourth Gibbon Cup drawing and calligraphy competition in Qingsong primary school. The event inspired students to observe the environment, and use their paintbrushes to convey their feelings about nature. The Hainan gibbon was a common theme in their drawings. 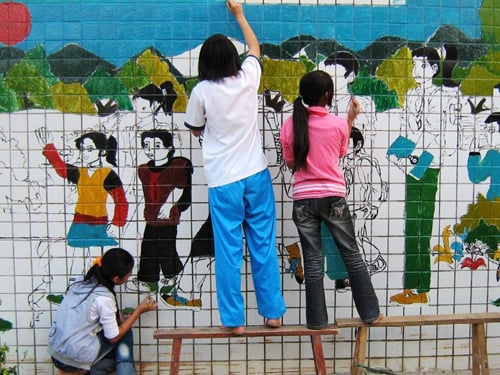 This project not only built upon previous work to enhance conservation, but also brought conservation knowledge into the formal education system of the local communities.

FFI has been working since 2003 to improve local minority villagers’ conservation awareness and alleviate their dependence on natural resources. After more than 10 years of hard work with other organisations (including government-related bureaus, Kadoorie Conservation China and others) we have achieved some great successes for conservation. Not least, we have seen an increase in the number of Hainan gibbons from 13 individuals in 2003 to 23 in 2014.

Time is fleeting, and the little boy Tianyou has grown up. Now he is a freshman in Qinghai Normal University, studying his favourite subject: painting. But Tianyou’s passion for gibbons has not faded away, and he has continued to draw and paint these animals ever since 2006.

In March 2014, Tianyou was invited to participate in the international conservation planning workshop for the Hainan gibbon as one of the representatives from the local community. Tianyou’s gibbon conservation story won him a rapturous standing ovation from the audience. 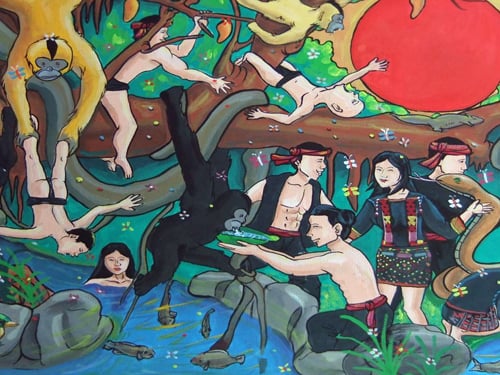 FFI sowed the seed of cherishing gibbons and nature in Tianyou’s heart when he was a child. Now this seed has sprouted and grown into a tree.

We hope this work can restore and improve the environment for local biodiversity, increase public awareness and community involvement, and inspire more and more people to join in the ranks of those working for gibbon conservation.