Oysters: the best ambassador of them all?

Tattoos have featured in maritime affairs for many years. Tattooing is considered by some to have reached its zenith in the late 19th century, when 90% of British sailors were tattooed. These tattoos were part of a complex iconography understood by the navy, where each drawing carried a message about its human canvas, so that a tattoo of an anchor signified an Atlantic crossing, a dragon meant that person had worked in China, and blue swallow reminded sailors of the first land bird they saw as they approached their home harbours.

So what, in a modern world where tattoos are undergoing a resurgence of popularity, might the oyster stand for? 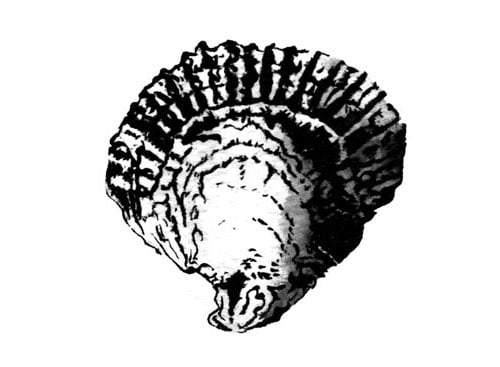 No less than this: the oyster is the perfect ambassador for humanity’s relationship with the oceans. Not just a water cleanser, a habitat creator, and a food source, but also a living testimony to our on-going exploitation of marine natural resources, as well as how our current activities continue to affect the marine world. Forget colourful coral reefs, charismatic cetaceans, top-order predators: the humble oyster is the ultimate pin-up for oceans and our relationship with them.

Food of the rich?

Our predilection for oysters as a food source is an ancient one: they have been consumed for over 2,000 years, and often in vast quantities. Such was the past abundance of oysters that in the early 19th century they were considered the food of the working classes. A staggering 6 million oysters were landed daily in New York City from oyster beds in New York harbour in the late 19th century. As well as providing nutrition, the oyster trade was a significant industry, providing employment for thousands, with oyster farming forming the mainstay of the economies of many coastal communities. 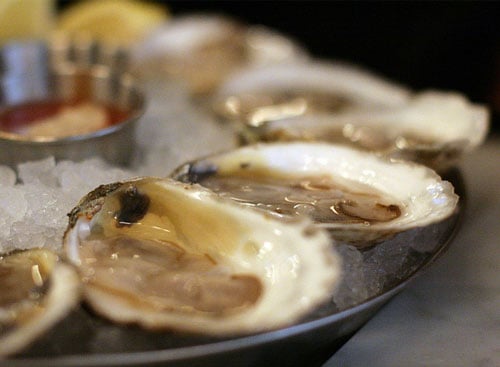 Once so common as to be considered 'the food of the working classes', today oysters are considered a rare treat thanks to centuries of overexploitation. Credit: Jules Morgan.

Contrast this past abundance with the situation today, just over a century later, where the eating of oysters has become associated with luxury, brought about by dwindling supplies. The decrease in oyster numbers is chiefly a consequence of overharvesting, but also of pollution and disease. In its shift from affordable snack to gourmand’s delicacy, the oyster stands for more than just its own fate. Rather, this tale of unsustainable exploitation epitomises the story of many of the species that share the oyster’s briny home: estimates suggest that, unless we change the way we fish, the stocks of all commercial fish and shellfish will collapse in less than 40 years.

Oysters are filter-feeders, removing small particles from the sea water that passes through their bodies. A single oyster can filter up to 5 litres of water every hour, and a bed of millions of oysters thus has a significant effect on its environment. Estimates suggest, for example, that the oysters of Chesapeake Bay, the USA’s largest estuary, filtered all of the Bay’s water every 3–4 days in pre-colonial times, before their numbers started to decline through overharvesting.

Oysters don’t just filter out organic particles, however. The location of oyster beds at the hem of the sea means they often come into contact with artificial particles, and increasingly, these are in the form of microplastics. Microplastics are tiny pieces of plastic, not easily visible to the naked eye, which are suspended in the water column. These particles either start life as microplastics that are washed into the sea, or result from the breakdown of larger pieces of plastic in the seas. 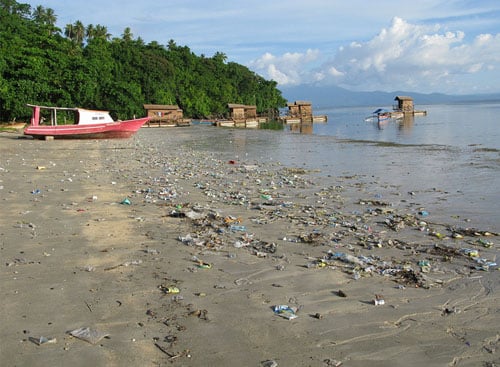 One potential source of microplastics are nurdles, the state in which ‘raw’ plastic is transported around the world. Spills from industry are thought to be a major source of nurdle pollution in the oceans, but whatever their origins, nurdles are almost becoming as ubiquitous as sand on the world’s beaches. Although the effects of microplastics on filter feeders such as oysters is not yet fully understood, these waste plastics are known to contain high concentrations of persistent organic pollutants, some of which are known environmental toxins. 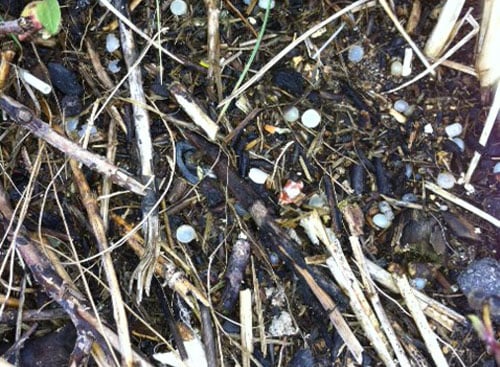 Nurdles (plastic in its raw form) are just one source of microplastic pollution in our oceans. Credit Abigail Entwistle.

Whether we’re thinking about microplastics leaching chemicals into the bodies of filter feeders such as oysters, albatrosses mistakenly feeding cigarette lighters and toothbrushes to their chicks, or leatherback turtles swallowing plastic bags as they hunt for their jellyfish prey, the curse of plastic pollution in our oceans is estimated to affect over 250 marine species.

No wonder that nurdles are sometimes known as mermaids’ tears.

Like many marine invertebrates, oysters have shells that are made of calcium carbonate, which can dissolve when it comes into contact with acid. Given that the world’s oceans are generally more alkaline than acid this shouldn’t be a problem…except that increased carbon dioxide levels are resulting in seawater becoming increasingly acidic. It is estimated that surface ocean water became 30% more acidic between 1751 and 1994. 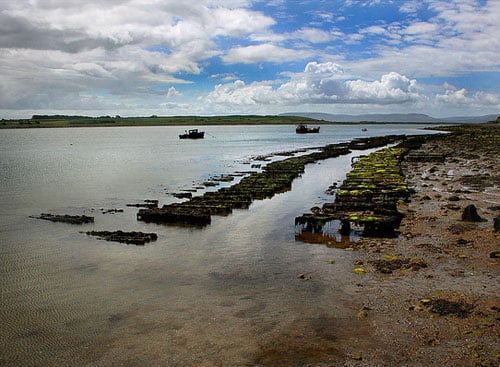 Both oysters and oyster farming may be increasingly threatened by rising ocean acidity. Credit: Eoin Gardiner.

Even the largest species in our oceans may need to adapt: more acidic seawater means that sounds will travel further underwater, affecting species such as whales that communicate using underwater calls.

I have come to realise, through reading and researching about oysters, that my tattoo (of one of the two halves of a native oyster shell) embodies an iconography of concealment. Together with its other half, that shell conceals the soft grey body of a creature that has fed people for centuries and provides clean water for marine habitats.

Oyster beds, lying placidly in shallow, muddy waters, conceal a story: a story of exploitation by people for millennia, people who thought the oyster bounty would never cease. It is a story of how the products we use unquestioningly every day can end up poisoning our oceans. Hopefully, by elevating the native oyster to the status of marine ambassador, it can hold up a mirror to our relationship with the oceans – and understanding this is surely the first step towards changing our behaviour towards the marine world.

The ExtInked project was launched in 2009 (the bicentenary of Charles Darwin’s birth) by the Manchester-based arts collective Ultimate Holding Company. Billed as a ‘once in a lifetime social experiment’, 100 volunteers were tattooed during the ExtInked project, each with a different threatened British species, becoming the ambassador for that species in the process. We are ExtInked is a national tour of the ExtInked project, and is currently being shown in the Rugby Museum and Art Gallery until 10 November 2012.