Another year, another sensational BBC nature documentary brought to us by Sir David Attenborough, long-standing vice-president of Fauna & Flora International (FFI) and, of course, broadcasting legend. Plus ça change, we hear you say. The Green Planet is a documentary with a difference, however. This time, the awesome animals have been relegated to supporting roles – and it’s the plants that occupy centre stage. Move over, magnificent megafauna. Make way for the megaflora.

Given that humans are completely and utterly dependent on plants for our survival, it’s mystifying how little attention we pay to them. FFI has been helping to rectify this sad state of affairs for many decades, hence the addition of ‘flora’ to our name way back in the mists of time. We have even learned to take it as a compliment when we’re mistakenly referred to as Flora and Fauna International.

At many of FFI’s project sites across the globe, our conservation efforts on behalf of the world’s threatened wildlife are also benefiting plant species, both directly and indirectly. Our collaborative tiger protection programme in Sumatra’s Kerinci Seblat National Park is a case in point. This globally important protected area harbours the largest population of tigers outside India, as well as elephants, tapirs, clouded leopards and the elusive Sumatran rhinoceros. Nearly 400 bird species have been recorded there, along with an array of extraordinary amphibians, reptiles and insects.

But the real show-stopper is a plant, and not just any plant. Rafflesia arnoldii is the world’s largest flower. This monstrous bloom is the botanical big brother of the species that enjoyed a starring role in the opening episode of The Green Planet. An encounter with this spectacular, super-sized plant is arguably just as memorable as a fleeting glimpse of the critically endangered Sumatran tiger that shares its rainforest habitat, not least because its appearance is so short-lived and so dramatic.

It's time to give back to our planet's support system.

How big is a rafflesia flower?

A rafflesia flower in full bloom may measure more than one metre in diameter, but its enormous dimensions are by no means its only striking feature. This putrid-smelling parasitic plant spends most of its life concealed beneath the bark of a species of vine, its chosen host. At a given but unpredictable point in time, it begins to reveal itself as an innocuous lump that swells week by week into a bloated bubo – reminiscent of an alien embryo – before bursting from the vine.

Once emerged, it sits stoically, looking for all the world like a large orange-red cabbage with tightly furled leaves. Eventually, under cover of darkness, its slowly unfurls five huge, leathery petals surrounding a deep, central cup that contains a formidable-looking set of scarlet spikes. 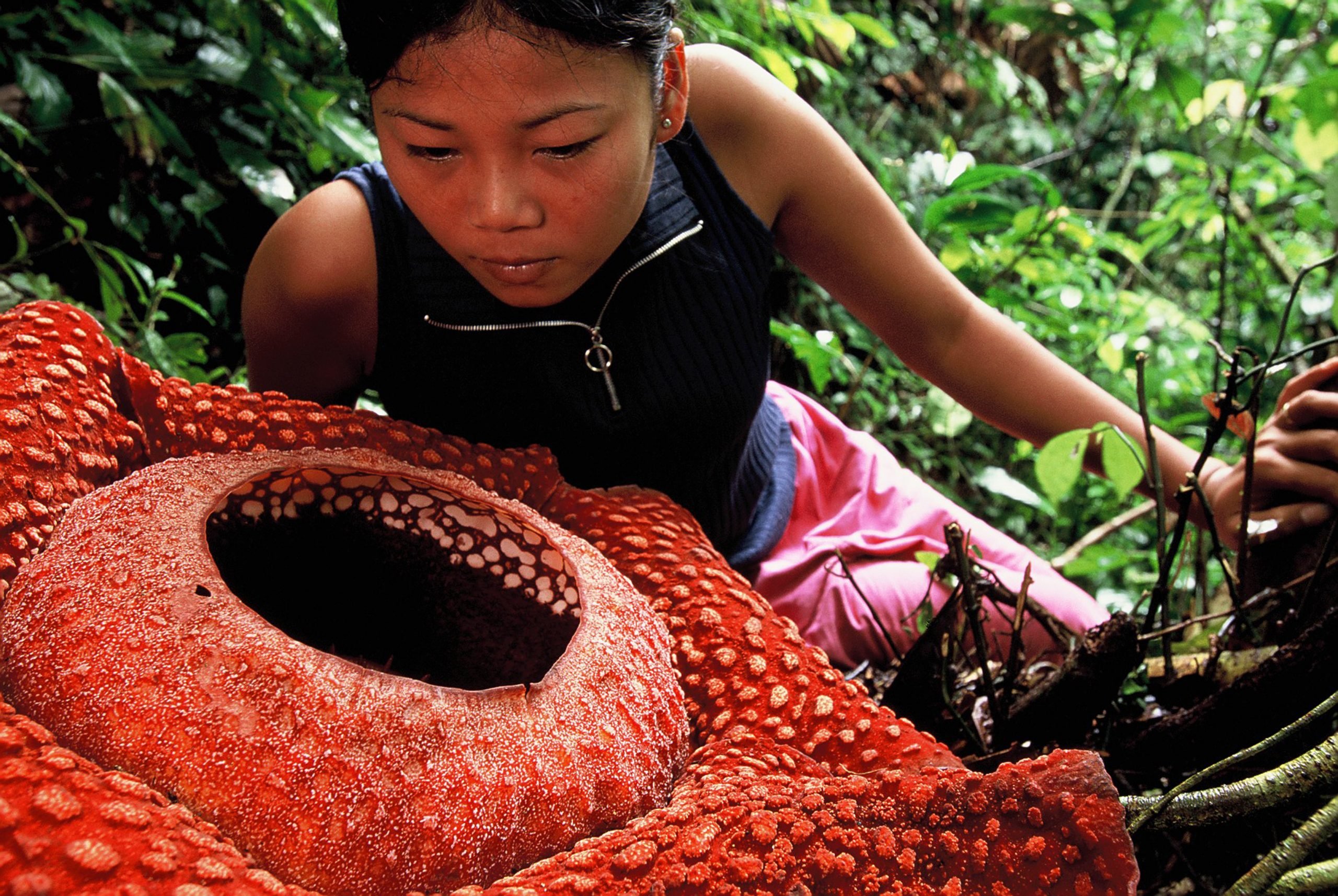 Up close and personal with a rafflesia flower, revealing its sheer scale. Credit: Jeremy Holden/FFI

How long do rafflesia flowers live?

A rafflesia’s floral display is a wondrous sight to behold, all the more so for its rarity – it blooms just once every few years. For fans of early Genesis, think ‘Peter Gabriel flower headdress’; readers too young to remember that elaborate costume would do well to google it. The show is over all too soon; within just three days, the flower will have dissolved into a puddle of black slime. By that time, however, it will have already served its purpose.

Rafflesia is known locally as bunga bangkai, meaning ‘corpse flower’, due to its putrid smell. The stench of decaying flesh emanating from the flower head and the plant’s meat-like appearance are no accident. Rafflesia is pollinated by visiting flies that are irresistibly drawn to the smell of carrion and the vermilion vortex at its bloodstained heart. As they investigate the meat mimic, the flies are coated with sticky pollen, which they inadvertently transfer to the next rafflesia flower that they visit.

Where does rafflesia grow?

So, where can you view one of these vegetable wonders for yourself? Southeast Asia boasts almost more than two dozen rafflesia species, ranging from Thailand across to the Philippines, but the largest, Rafflesia arnoldii, is confined to the islands of Borneo and Sumatra.

It was named in honour of Thomas Stamford Raffles, founder of Singapore, and his botanist companion, Joseph Arnold. They were among the first westerners to witness the plant flowering – in an area that is now part of Kerinci Seblat.

Why is rafflesia endangered?

Like so many other species that are confined to the tropical rainforests of the world, rafflesia is threatened by the wholesale destruction that has seen vast swathes of its habitat cleared in recent decades for timber extraction and conversion to oil palm plantations and other monoculture crops.

The conservation work of FFI and our partners at sites such as Kerinci Seblat National Park is helping to ensure the survival of the remarkable rafflesia and raise the profile of plants on the world stage.

Plant diversity is fundamental to all life on our planet.
Please support FFI's efforts to safeguard threatened flora.