On the trail of the gibbon’s song

The Fauna & Flora International (FFI) team in China recently joined a trek through the Ailaoshan Nature Reserve in Yunnan Province, China, which began with a workshop on gibbon conservation in China and other parts of Asia – including how to combine ecotourism and conservation to inspire local communities to preserve their forests.

Once the workshop was over, an intrepid group of 42 biologists, botanists, birdwatchers, ecotourism planners, outdoor tour leaders, reserve rangers, media representatives, and college students headed to Ailaoshan to explore the mysterious forest in the hope of hearing the beautiful song of the gibbon. 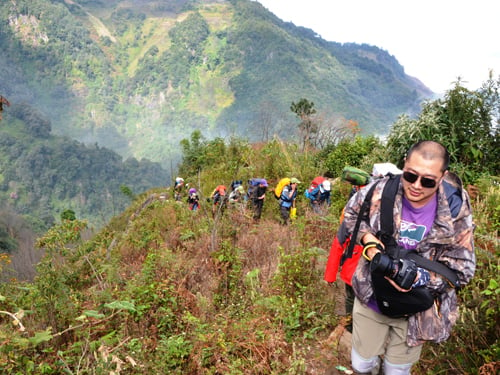 It was my second time trekking through Ailaoshan, and as we traversed the newly maintained paths, I found myself thoroughly enjoying both the walk and the breath-taking scenery…possibly rather more than the team leader who was now responsible for the wellbeing of 42 trekking novices in the wild!

Our first morning ended at Babaoshu village. We arrived at around noon to discover that the advance team had already prepared us a delicious lunch with local food. Following a short rest after lunch, we set off for the first camp site at Maluchang (which means “deer field” in the local language).

After a two-hour climb, we arrived at the border of the nature reserve and were treated to a magnificent view of the forest from the top of the mountain, with masses of green ferns covering the trees, and birds twittering and trilling from the high, leafy boughs.

We were lucky to have Fang Wei, a botanist from the Kunming Institute of Botany (at the Chinese Academy of Sciences) with us, and he taught us how to identify plants of all sizes in the forest, from the tall evergreen trees to the low shrubs and ferns, and even mosses and fungi.

My group did not arrive at our first campsite at Maluchang until 6pm, and I felt a new respect for the 12 rangers. We all honoured them as our guides and interpreters, but perhaps more importantly as the cooks and porters of four days’ worth of food for our 42 strong team.

Again we were greeted by the delicious smell of cooking food which made us feel even hungrier than we already were, and we set up our tents as quickly as possible before we sat down to a well-deserved dinner. 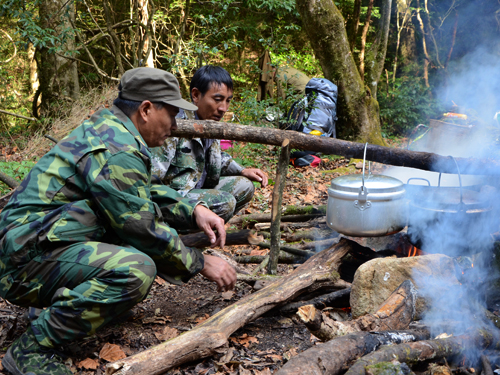 In the fading light of a wonderful first day in the mountain, we played games to help us learn more about the nature around us and about each other. 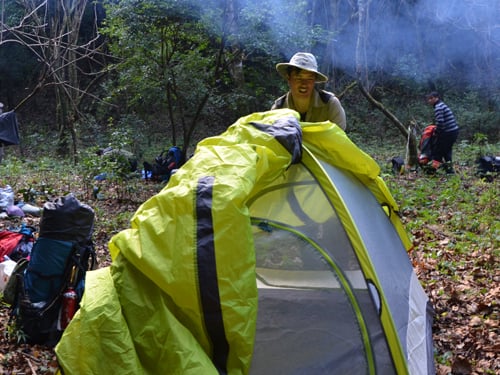 Some people went to bed early with burning legs and aching backs after the long hike, while others stayed up by the camp fire, chatting and daydreaming. The stars were shining in the sky, and it felt like the galaxy was within reach.

It was still dark outside when I awoke early the next morning, but already the rangers were up and cooking breakfast. As I talked to them by the camp fire, I was amazed by the number of animals they had identified just by their calls during the night. 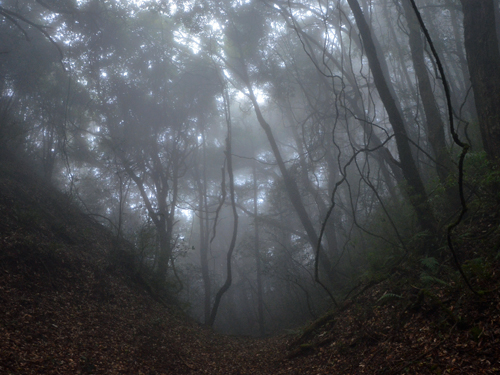 A misty morning in the woods. Credit: Li Ran/Yuxi Journal.

While we waited for breakfast, we set off (with our head torches) for the top of a nearby hill in the hopes of hearing a gibbon concert.

It was dawn. Now and then, bird song broke the silence of the forest, and we sat there in the mist – silent, waiting. 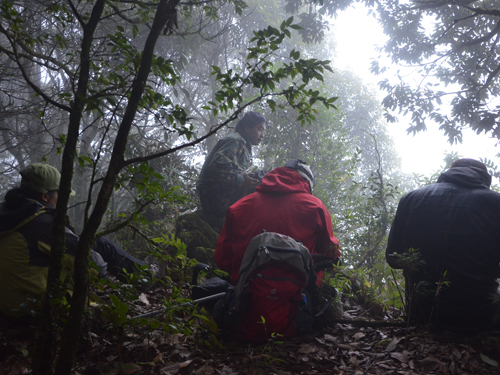 The team waits in vain for the gibbons to sing. Credit: Li Ran/Yuxi Journal.

After two hours however, we were forced to give up. Gibbons normally sing on sunny mornings, and unfortunately the fog was too heavy, the ranger told us. So we headed back to camp for a quick breakfast, and prepared for another long trek.

As we continued up the mountain, the trail became narrower and steeper, slowing us down.

It took us five hours to arrive at the second camp site, which was not in such a good condition as the first one, and – once pitched – most of our tents were leaning precariously at 30 to 45 degree angles.

We had a relaxing evening sitting around the camp fire, listening to the rangers’ conservation stories. The next morning, we arose early again, hoping to hear the gibbons. But again we waited in vain…the gibbons still didn’t sing for us.

Our third day’s trail was a long, steep descent. It was a hard walk, but a few of us in the final team were rewarded at midday when we finally got to hear the gibbons sing. 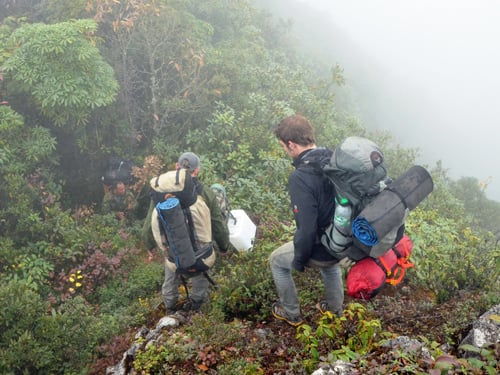 Although they were far away, we looked at each other with excitement and wonder in our eyes and big smiles on our faces; it took us a long time to calm down.

When we finally arrived at the bottom of the valley, we found a clean and beautiful river running through it. The mist on the water made the valley seem like a wonderland, and if it hadn’t been a rather cold day I would have liked to take a swim – it looked very tempting after three days on the trail! 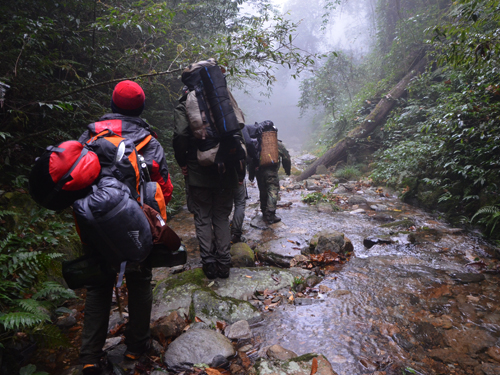 After a long hike, the team reaches a beautiful valley. Li Ran/Yuxi Journal.

Heavy rain at our campsite that night forced us all to retire to our tents at just 7pm, but sleep did not come easily in the cold and wet tent, and after a restless half hour I decided to venture out to the fireside.

More than 10 other campers had had the same idea, and we talked about our lives, our work travel…and, of course, shared our thoughts on the three-day trek. 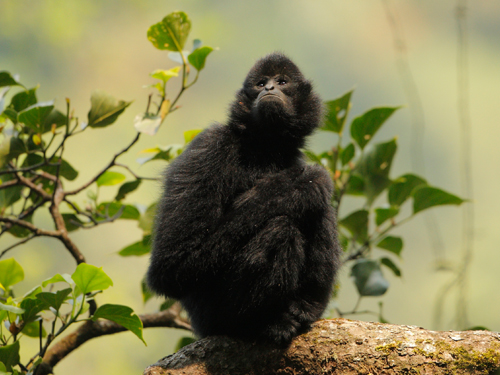 We agreed that, even though only a few of us had heard the gibbons, it had been a great pleasure to be immersed in such a rich forest community, knowing it was home to these precious animals.