On the tiger trail – it’s a jungle out there

I have always wanted to travel to Sumatra and experience the on-ground work of conservation programmes. Working as a tiger handler at Australia Zoo, I have been in involved first hand with helping to fundraise for Fauna & Flora International’s (FFI) anti-poaching programme for Sumatran tigers.

Recently this dream became a reality, when Che Woolcott (another handler) and I were given the incredible opportunity to visit Kerinci Seblat National Park, and spend several days with the Tiger Protection and Conservation Units (TPCUs).

On arrival I met with Deb Martyr who is the Team Leader, and straight away I was impressed by her knowledge, passion and commitment to the programme. Being able to spend several days with her was an invaluable experience. The programme is run by FFI, in co-operation with the National Parks Authority.

When we got to the patrol base we were greeted by many of the tiger patrol team members. These guys are not only passionate about their work but also very proud of what they do. I was lucky enough to spend four days in the forest with a patrol made up of four experienced TPCU team members, M, Jai, Suhardi and Hari. 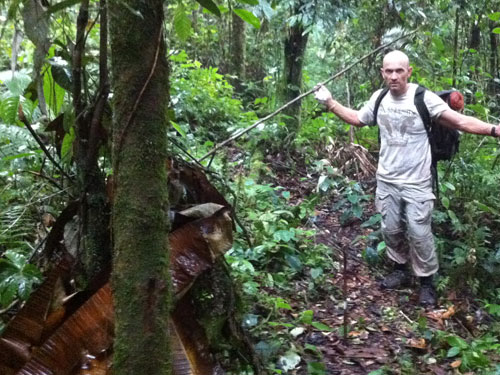 We were told by Deb before heading off, that we would be entering Ladeh Panjang, about 6-8,000 feet above sea level. This area has the highest peat swamp in Indonesia so it would be cooler and the forest thick and thorny. Not many people visit this area, and we were told there was a good chance we may see some evidence of poaching, as they are known to be active here hunting deer and other species. The problem is that even when tigers are not the focus of the poachers they often get caught in snares set for other animals.

We spent a good part of the first day crossing farms bordering the park. Sadly the farmland is creeping further into the national park as the demand for more fertile land to grow crops increases. The first night was spent in a potato farmers hut near the forest, where we could see the fabulous rhinoceros hornbills flying over the tree line and hear the haunting calls of siamang.

The following morning we trekked into the forest and before long the guys had spotted well-formed tiger paw prints on the track we were using. It was more than I expected to see, knowing how rare these animals are. Many times the guys would stop and point out areas where tapirs had been feeding or pigs had been rooting. Their observation skills were incredible and never failed to amaze me. 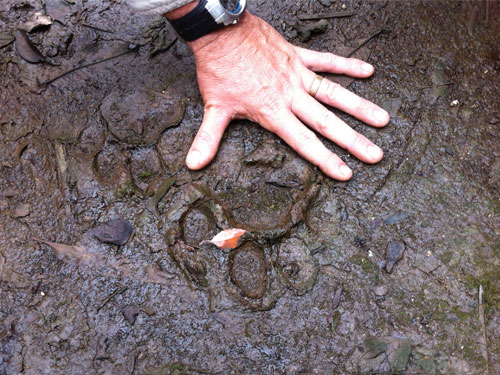 We witnessed gibbons frolicking in the tree canopy, and saw the depressions in the foliage where sambar deer had been rolling. Before long we came to a clearing – and the remains of a crude campsite. Jai notified us that this was made by “illegals” (poachers) and this was not the only sign we would see while in the forest for the next couple of days.

We decided that this would be the perfect place to set up camp so after a short time they had built the shelter and had a fire burning with rice and chilli (the staple) being cooked for dinner. That night was one of the coldest I had experienced in a long time. After a hot breakfast we headed of to search the perimeter of the swamp, heading up toward the lake. Upon reaching the lake, I looked down at the clumps of reedy grass surrounding the water, amazed to see many different frogs moving about.

On our way back to camp we found a couple of abandoned poacher hides, where the snares had already been removed. Most of these were set for smaller animals like pigs and birds.

The last day we climbed higher up the side of the ranges and found a freshly cut track but no sign of the poachers who had made it. The trek was extremely strenuous and difficult and I was impressed with how these guys coped with this arduous patrol, knowing they would often be out for 5-7 days at a time. 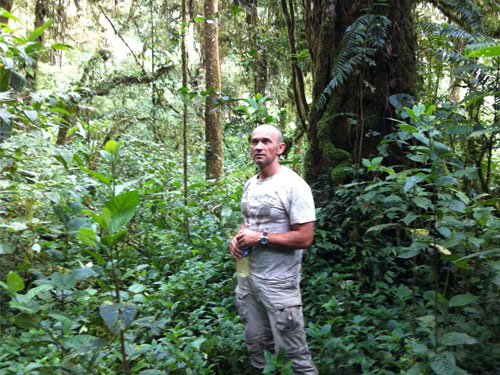 As we left the forest heading back to our place of pickup, I looked back at the forest and wondered when or if I would ever get the opportunity to return.

The day after we returned to the base the team were called away to a nearby village where a tiger had been seen. On their return they said the cat had moved on and were hopeful it would not return, as tiger encounters like this can end tragically for the tiger if they continue to hang around.

I have a new-found respect for the work that Deb and the TPCU patrols do, this was an invaluable experience and has given me a better understanding of the programme we support. But the most rewarding part of the trip was getting to know the guys who are out there in the field who spend time away from their families and commit their time to protecting the last remaining Sumatran tigers.