“Ometepe, we want you green!”

Based in FFI’s US office in Washington, DC, Adam is leading efforts for strategic growth and management of FFI’s U.S. Government portfolio, while working closely with USAID, U.S. Fish & Wildlife Service, and other USG agencies. He has over 15 years’ experience working in international biodiversity conservation and natural resources management, during which time he has worked on many facets of large-scale conservation programmes, including landscape-level conservation planning, project design and management, performance monitoring, protected area management, and watershed sciences. Adam holds an MSc in Watershed Sciences from Colorado State University and a BA in Anthropology. He spends most of his spare time at home in Frederick, Maryland with his lovely wife Keri and two beautiful children, Stella and Leo.

When travelling in warm tropical climes, where hammocks and fresh mangos abound, my mind and body invariably slow down just a notch. In such places, daily life seems simpler to me and more deliberate, and people are certainly more in touch with nature as their livelihoods are closely linked with the services it provides.

I was fortunate to experience this recently while visiting Fauna & Flora International’s (FFI’s) Nicaragua team on Ometepe Island, which in 2010 was declared a UNESCO Biosphere Reserve for its globally important biodiversity.

The work on Ometepe is one of FFI’s three main projects in Nicaragua, along with a sea turtle conservation programme and a community-based marine initiative. The importance of Ometepe for biodiversity conservation is now well-known, thanks to the efforts of FFI and partners to collect biological information, document the island’s natural wealth, and facilitate the process for Ometepe to be declared a Biosphere Reserve.

This spectacular island, with its two iconic volcanic peaks and an isthmus with important forests and wetlands, is a jewel of the Americas and is globally important for its diverse forest habitats and its resident and migratory birds.

Farming for the future

In addition to its remarkable natural beauty, I was particularly drawn to the human component of Ometepe and its diverse ecosystems. It is clear that the future of the island’s environment rests with its people and their reliance on nature’s services for life’s basic necessities.

Ometepe is a mosaic of different land uses and classes of protection, including a national park, several nature reserves, community buffer zones and a ‘development zone’ for settlement and commercial development. To address issues of land-use and natural resources management, FFI has been working with farmers to protect important forest habitats, while improving and expanding sustainable farming practices. 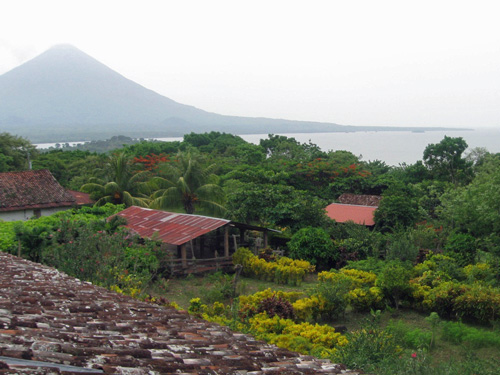 In partnership with Fundación Entre Volcanes (FEV), FFI is working with local farmers to strengthen farming practices and diversify agriculture-based livelihoods, and help them begin to adapt to a changing climate. Ultimately the main objective of improving farm productivity is to reduce the need for clearing new areas of forest.

The agriculture project is providing training, seeds and farm supplies, technical assistance and access to plant nurseries for new crops. It is working to incorporate best practices in soil protection, planting beans and other nitrogen-fixing legumes while providing incentives for reforestation of degraded areas using native tree species.

A force to be reckoned with

The driving force behind FFI’s results on Ometepe these past six years has been the determined effort of Salvadora Morales, FFI’s Ometepe Project Coordinator. It was such a pleasure spending time with her, walking through the forest in search of parrots and other iconic bird species that call Ometepe home.

Salvadora is currently working to analyse and publish results from five years of bird monitoring data that her team has collected on Ometepe, with support from the US Fish and Wildlife Service Neotropical Migratory Bird Conservation programme.

She is an ambassador for Ometepe in the international bird conservation community, and seems almost as well travelled in this hemisphere as some of the island’s migratory birds. Salvadora has also been instrumental in raising the profile of Ometepe and in strengthening connections with other important bird areas in the Americas – even as far away as Canada, working with the Bruce Peninsula Bird Observatory.

Locally, Salvadora has been influential in producing and disseminating environmental education materials on migratory birds and conservation. This is clearly seen in the campaigns Ometepe, Te Quiero Verde (a collaboration between FFI and FEV), and Unidos por las Aves/Bridging the Americas (in association with The Smithsonian Migratory Bird Centre) that she has spearheaded. She’s currently working on a new environmental awareness campaign, which aims to elevate the iconic yellow-naped parrot as the symbol of Ometepe’s globally important biodiversity. 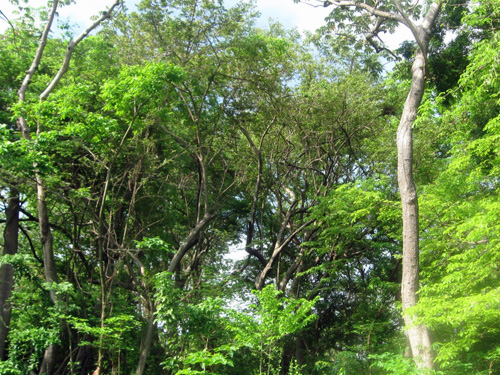 Walking through the forests of Ometepe, we were fortunate to spot many of the species that make the island so special, notably catching sight of a spectacular array of birds and hearing the low grumble of howler monkeys in the canopy. But the climax of my visit to Ometepe was on the farm of Wilfredo Barrios, one of the farmers that FFI and FEV have been working with.

We have worked to help him diversify his crops and improve his agriculture practices, in return for the reforestation of important habitat on the slopes of Ometepe’s volcanoes. 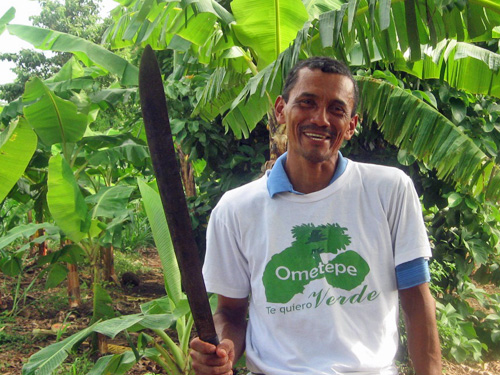 It was extremely uplifting to hear anecdotes from Wilfredo about his more secure livelihood resulting from harvesting new crops (such as tomatoes, beans, sweet peppers and other products) that can be sold in local markets for much-needed income. To hear these stories on a hot humid tropical day, while eating the most succulent watermelon I’ve ever tasted, with juice running down my face, only added to the pleasure.

This melon, fresh from his field and sliced with the machete of a resilient and optimistic farmer, was a powerful symbol of a more promising future for Wilfredo and his family, and for Ometepe.

As I shared this most delicious treat with my colleagues and partners in the shadow of Maderas Volcano, I felt encouraged by the role that FFI can play in conserving nature in a fast-developing world with myriad threats to our natural environment. 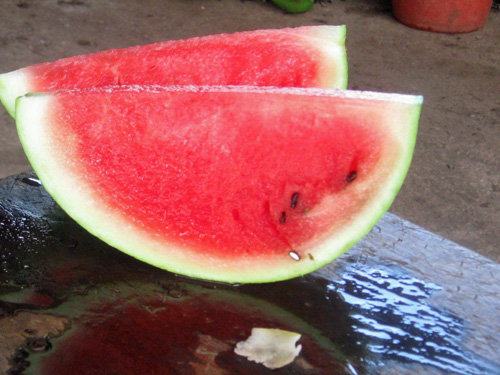 FFI’s investment in partners and local communities, its science-based approach and its international experience and perspective – these are FFI’s strengths that allow us to address environmental challenges in unique and innovative ways.

And it was at that moment, sitting under a shade tree on Wilfredo’s farm, that I clearly understood the link between a succulent watermelon and conserving the beautiful yellow-naped parrot, its forest habitat, and the rest of Ometepe’s extraordinary biodiversity.

Based in FFI’s US office in Washington, DC, Adam is leading efforts for strategic growth and management of FFI’s U.S. Government portfolio, while working closely with USAID, U.S. Fish & Wildlife Service, and other USG agencies. He has over 15 years’ experience working in international biodiversity conservation and natural resources management, during which time he has worked on many facets of large-scale conservation programmes, including landscape-level conservation planning, project design and management, performance monitoring, protected area management, and watershed sciences. Adam holds an MSc in Watershed Sciences from Colorado State University and a BA in Anthropology. He spends most of his spare time at home in Frederick, Maryland with his lovely wife Keri and two beautiful children, Stella and Leo.