Eight new freshwater mussels have been discovered by an international team of scientists in Myanmar, a finding that has sparked calls for action to protect this most vulnerable of freshwater animals.

The four new species and four new subspecies were found in four river basins in Myanmar, including in the Ayeyarwady, the country’s largest river.

Freshwater mussels are sensitive to habitat and water quality, and due to human activities are going extinct at faster rates than any other aquatic animal, with 40% of species being near threatened, threatened or extinct.

While the findings suggest Myanmar’s river basins are mussel hotspots, the river basins in which these new species were found are under severe human pressure from dam construction, water pollution, overexploitation, and invasive alien species.

Mussels are especially diverse in tropical Asia and often exist only in their specific location, making them more vulnerable to extinction. 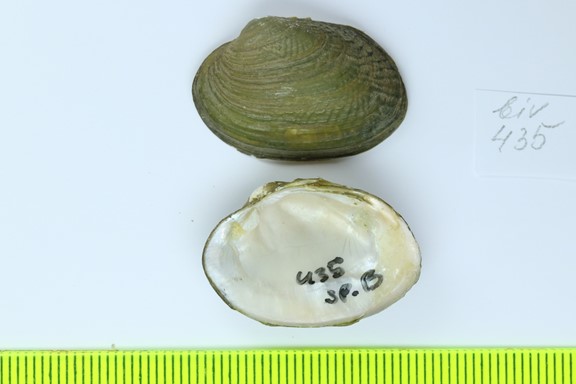 One of the new mussels described by researchers

The new discoveries are given added weight by the fact that freshwater mussels are central to the proper functioning of freshwater ecosystems. The Ayeyarwady River is extremely important to the national freshwater ecosystem in Myanmar as it is the main migration route for several migratory fish species that support the economy of local fisheries in the country. Large wetlands along the Ayeyarwady River system are also crucial for several migratory and resident bird species and wildlife.

“Freshwater mussels are an important resource for food and traditional medicine throughout Southeast Asia. Therefore, the decrease of mussel abundance negatively affects local communities as well as destabilising ecosystems,” says Ivan Bolotov, the lead author of the study describing the new discoveries.

One of the species has been named Leoparreysia whitteni in honour of the late conservation biologist Tony Whitten. This species is remarkable as the smallest representative of this genus. It has a beautifully sculptured shell with a green outer layer and whitish nacre. The genus Leoparreysia was established in 2017 and describes a group of thick-shelled freshwater mussel species endemic to Myanmar and western Thailand.

The survey was supported by the Myanmar Department of Fisheries and local communities along the route.

“It is critical that we address the threats to these mussels by tackling pollution and lessening other human pressures,” continues Bolotov. “By raising awareness of the threats facing these rare freshwater mussel species we can contribute to protecting the resources that are so valuable for local communities here in Myanmar.”

The discoveries were made as part of a broader programme aiming to uncover the previously overlooked diversity of freshwater mussels in Myanmar. The programme is supported by the National Geographic Society and the Russian Ministry of Science and Higher Education. The researchers plan to expand their study into other countries in Southeast Asia to understand how widespread unique mussel species are across the region.