A fairly appalling story made for a lot of headlines over recent weeks in Vietnam.

In the central Vietnamese province of Quang Nam, a man bought a grey-shanked douc female with an infant. He had butchered the female in a disgusting way and then posted this story on Facebook with lots of graphic pictures.

A few of them I want to share with the readers here.

One of the images taken from the arrested soldiers Facebook page

For 15 years I have worked as a veterinarian for various primate rescue projects in Vietnam. Hunting and killing doucs has always occurred. All three species of doucs (Pygathrix nemaeus, cinerea and nigripes) are protected in Vietnam at the highest possible level. But law enforcement is weak and strong repercussions for hunting and killing these animals are lacking. In the recent years there are signs that suggest that there is an increase in the hunting of doucs. Central Vietnamese forests get cleared at an alarming rate and what was safe before, because it was remote and inaccessible, is safe no more. In the past three years there have been several instances where hunters with whole groups of doucs have been arrested, and reported in the local news.

However these cases never drew much reaction by the public.

This time it is different. The fact that the pictures were posted on Facebook means they were shared far and wide – very quickly – to people in many countries. They were accessible and reached many more people than local media ever could, which made all the difference. This time people have reacted – they are truly upset and appalled. 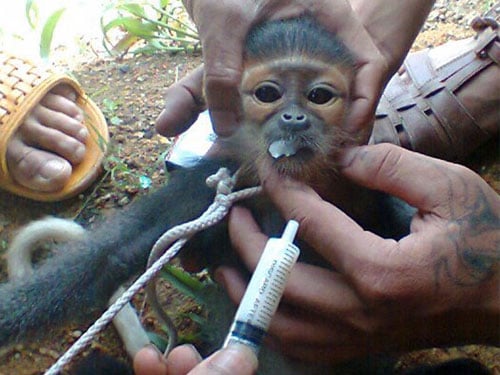 The soldier tortured the douc and her infant, while capturing photos of each step

It is not only the fact that the man was not afraid to break Vietnamese law and even went public about it without any fear of the consequences.

It is not only the fact that this was not some young boy but a well respected soldier, a person who should represent Vietnamese law.

It is the fact, that he not only killed, but butchered the animal. That he put a cigarette in her mouth. That he hacked her hands and feet off. That he put her in bathtub and took gruesome portraits of himself with her skinned head next to him.

This blatant disregard for life is what caused the outrage. 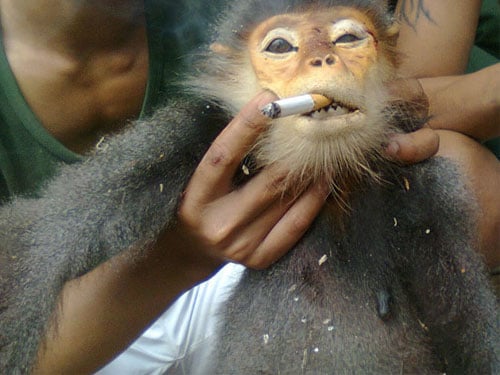 I have been here a long time. I have treated many animals with snare and trap injuries, lost many, when the wounds were too severe or the animals too traumatised. Every day I see how indifferent most people can be towards their domestic animals.

But this is still different. It is the posing with the dead and mutilated animal. It is the fact that it people promote themselves like that, they share it because they want people to see it. This case highlights a complete void of basic morals, and outright cruelty.

My biggest worry is that we might get copycat acts – after all it got him something – fame overnight! Incentive enough for many people for the strangest acts these days. Yes I am afraid now. I am afraid for the doucs because they are so vulnerable. I am afraid for all primates.

Of course this act does not reflect the attitudes of the majority of Vietnamese people. But killing doucs and other primates and all wildlife does occur in this country at an alarming rate. This case was unique in a way but in many ways it is a lucky case because of the coverage it’s received – it’s left people with little option other than to pay attention.

Wake up people! In a situation like in Vietnam, indifference also contributes to the decline of species. It is imperative that we take a visible stand against all wildlife trade.