A new dawn – Oryx is reborn as an open access journal

One of the world’s most renowned conservation journals is about to embark on a new and exciting chapter in its long and distinguished history.

From 1st January 2021, Oryx—The International Journal of Conservation will be a fully open access publication. Open access allows scientists, practitioners, journalists, policy makers and members of the public to read, download and share journal content for free, thereby maximising the impact and reach of published research and ensuring that everyone can benefit from and build upon the work.

Fauna & Flora International (FFI) published the first issue of its journal as long ago as 1904, although it was almost half a century before the publication was rebranded and graced with its first oryx logo. The catalyst for this makeover was newly appointed secretary Lieutenant-Colonel Charles Leofric Boyle, who was impressed by the striking facial markings of a beisa oryx that he often encountered during his habitual lunchtime stroll through London Zoo. “We hope that the design and the use of a convenient and attractive name will help to popularise our Journal and so forward the cause of wild life preservation,” explained Boyle at the time. 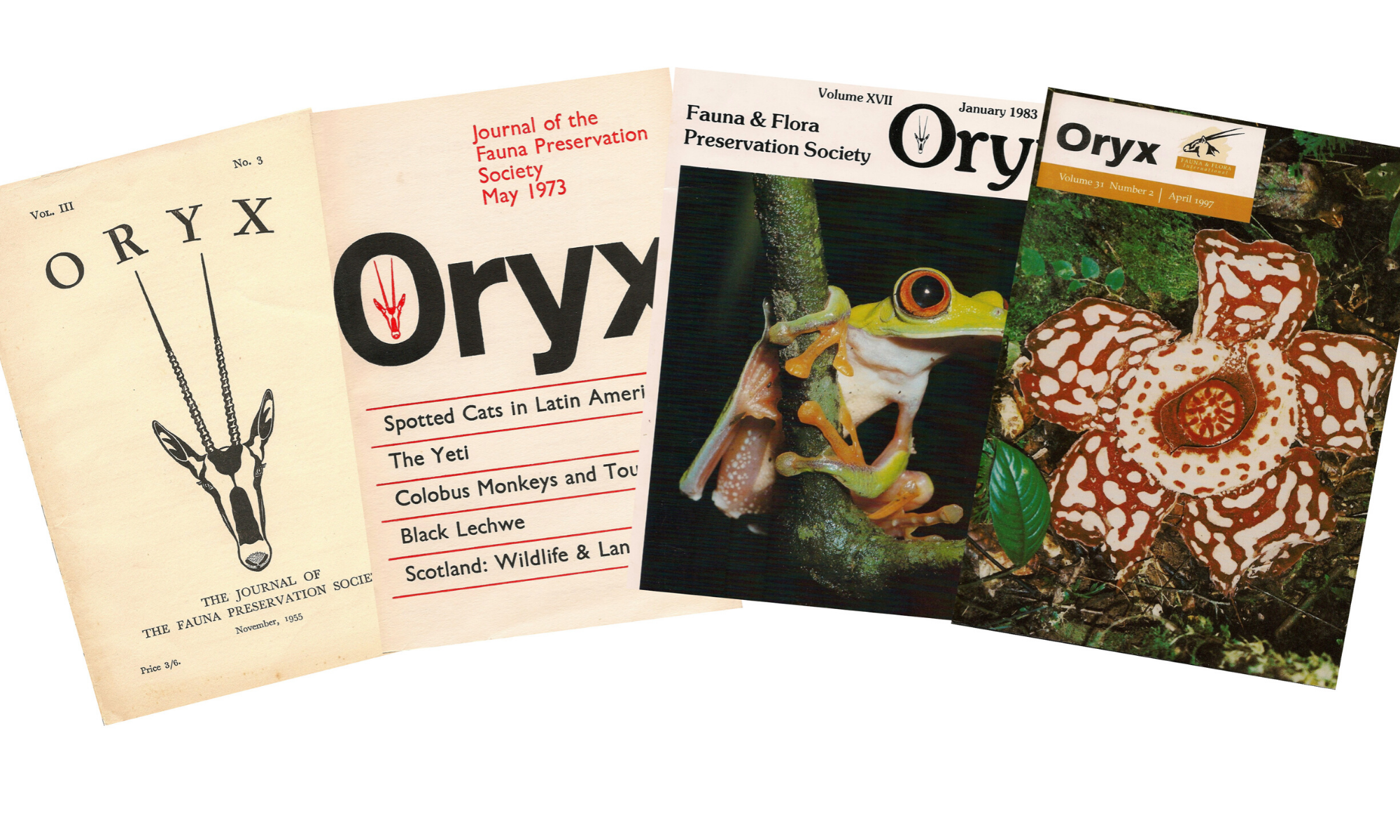 The evolution of Oryx through the ages. Credit: FFI

The first volume of Oryx, complete with a new logo designed by wildlife artist Barbara Prescott, appeared in 1950. Later that same decade, the journal caught the eye of a young zoologist by the name of David Attenborough, who promptly enrolled as a member of FFI. It was the start of a relationship that led ultimately to Sir David’s appointment as FFI vice-president in 1979, and that has now endured for more than six decades.

The journal began life as little more than an in-house logbook in which FFI’s founders recorded the minutes of their meetings and the conservation concerns of the earliest members. However, it quickly evolved into a more comprehensive publication that incorporated contributions not only from its own members but also from others with an interest in wildlife conservation. Over the years, the flow of correspondence grew from a trickle to a minor tsunami of letters containing petitions, cries for help, tall stories and polite suggestions.

More than a century later, Oryx is an acclaimed, peer-reviewed publication widely regarded as the conservationist’s vade mecum and a leading authority on all things faunal and floristic. The longest-running journal of conservation science, it supports the publication and communication aspirations of conservation practitioners and researchers throughout the globe.

In its current guise, Oryx is published on FFI’s behalf by Cambridge University Press. It features a broad spectrum of topics from biodiversity conservation, conservation policy and sustainable use to related social, economic and political issues. The journal has a particular interest in material with the potential to improve conservation management and practice. 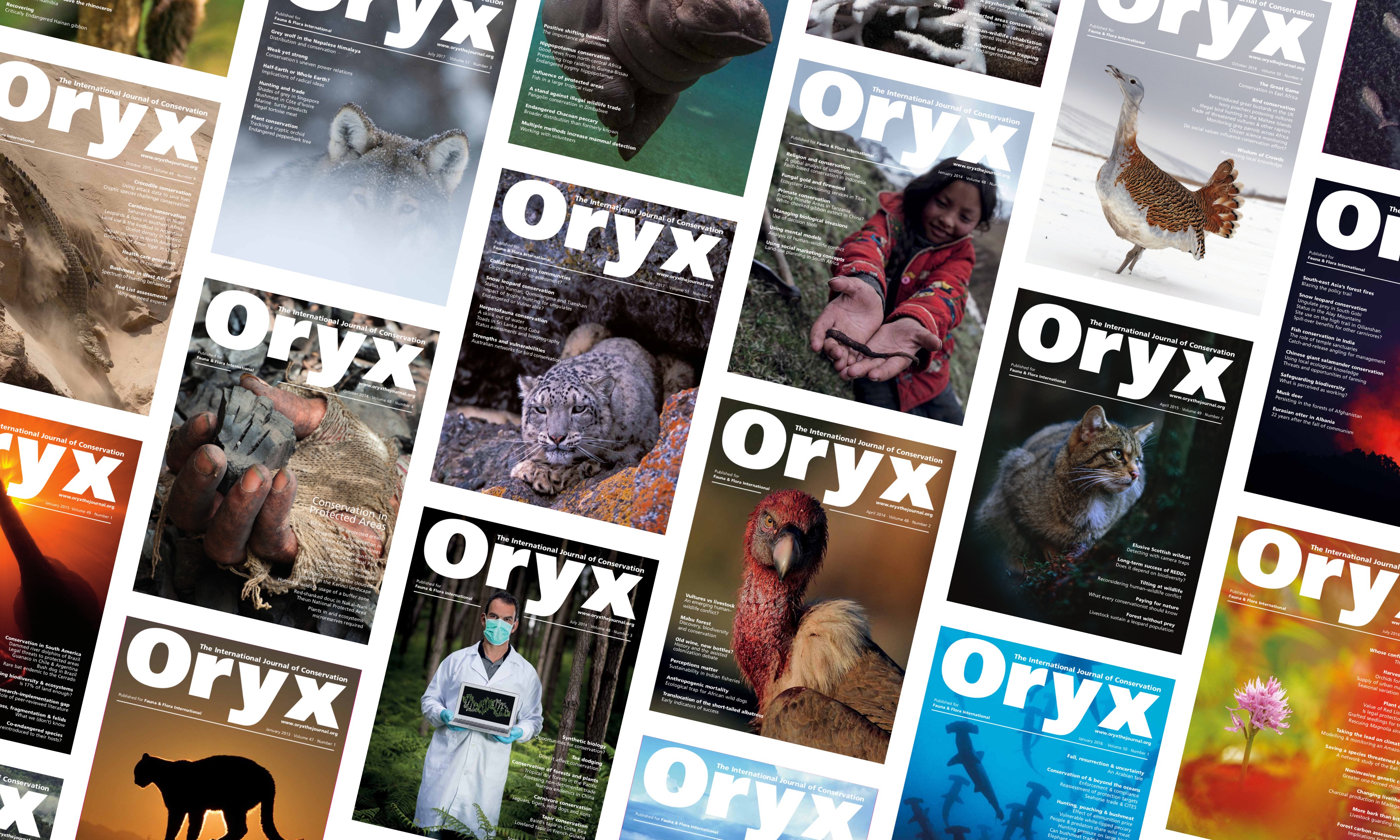 The journal in its latest livery. Credit: FFI

Uniquely, Oryx also helps build conservation capacity; the editorial team provides a range of support tools, particularly for readers and would-be contributors from developing countries. It also offers writing workshops that help navigate the tricky process of turning research into publishable manuscripts. In the past decade alone, the journal has published submissions from more than 100 countries.

Thanks to generous support from The Rufford Foundation, Oryx will shortly be reborn as an open access journal. The team is already busy preparing for the transition, and the new arrangement will apply to any content that is submitted from 1st August 2020 onwards and subsequently accepted for publication. Editor Dr Martin Fisher, who has been at the helm for almost two decades, sees this as a seminal moment for the journal: “This is the most significant development in the journal’s eminent history: with the support of the Rufford Foundation the research published in Oryx will be freely accessible to all readers, no matter where they live or work.”

More details on the changes, and what these mean for contributors, can be found on the Oryx website.