Later this year, virtually all the countries on Earth are due to meet in China under the Convention on Biological Diversity to agree global conservation targets for 2030. Virtually may be the operative word, if Covid-19 precludes member states from meeting face to face in Kunming. Whatever the format, conservationists fervently hope that global leaders will agree to set aside 30% of the world’s land and sea for nature by the end of the decade. But is that enough?

In his 2016 book Half-Earth: Our Planet’s Fight for Life the biologist E. O. Wilson went further. He proposed ring-fencing half of Earth’s surface as a vast natural reserve dedicated to conserving biodiversity. If that utopian vision strikes you as more akin to cloud cuckoo land than to blue-sky thinking, let’s just remind ourselves why drastic measures are needed.

We’re witnessing a worldwide wipeout of wildlife that is unprecedented in human history. Species extinction rates have increased more than a thousandfold since Homo sapiens first emerged some 300,000 years ago and embarked on a mission to make a mockery of that scientific name. According to a 2019 UN report, one million species – and counting – are currently at risk of extinction.

That stark statistic includes some of the animal kingdom’s biggest rock stars, from gorillas and chimpanzees – our closest cousins – to lions, tigers, rhinos and elephants. It also encompasses myriad unsung support acts that even the most ardent nature lovers may never have encountered.

“The plight of the little animal should all by itself serve as a wake-up call to us for mass extinctions imminent or in progress round the world,” Wilson warned us. “We’re extinguishing Earth’s biodiversity as though the species of the natural world are no better than weeds and kitchen vermin.”

He was referring to the Kihansi spray toad, a species rendered extinct in the wild when its microhabitat was destroyed by dam construction, but those words are equally apposite for every amphibian, reptile and invertebrate that – knowingly or inadvertently – we are ushering down the one-way street to oblivion in the name of ‘growth’.

Guardians of the little guy

Fauna & Flora International (FFI) works to safeguard some of the world’s most iconic wildlife, but we also champion many less-familiar species that might otherwise be overlooked, from Siamese crocs to saiga antelope.

Over the next few months, in the run-up to that key conference in Kunming, we will be showcasing some of the neglected plants and animals that FFI is helping to protect. In this first instalment of our series, timed to coincide with World Wildlife Day, we want to talk about snails. Yes, really. 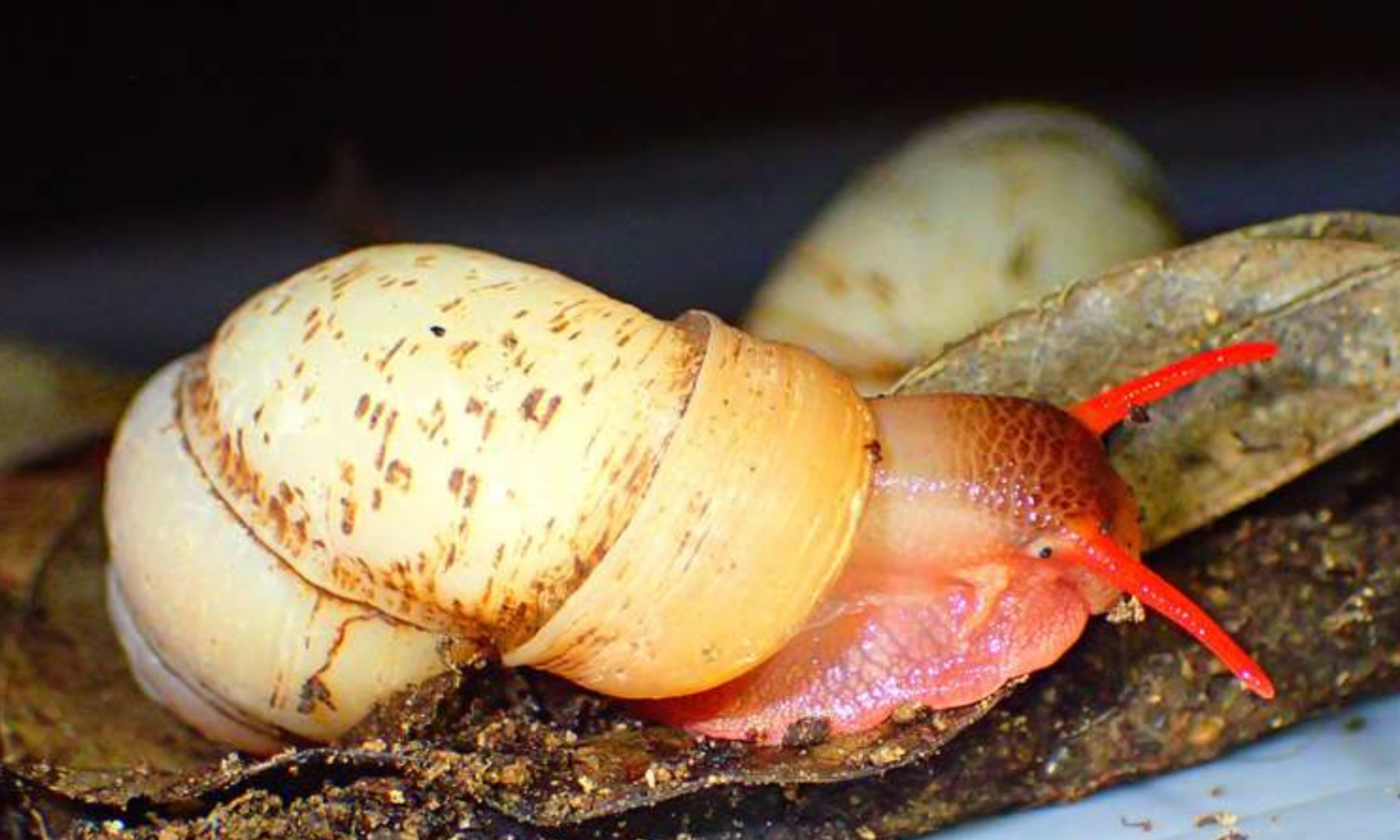 FFI was on the case as long ago as the 1980s, supporting a captive-breeding programme for critically endangered French Polynesian tree snails whose native South Pacific island had been overrun by non-native predatory snails.

The voracious newcomers had been deliberately introduced to Moorea in the hope that they would eat their way through the multiplying colonies of another alien, the invasive and destructive giant African snail.

Unfortunately, they displayed a marked preference for local delicacies and proceeded to hoover up the native Partula snails instead. After several local species were wiped out completely, an FFI grant enabled colonies of five of the remaining nine species to be rescued. 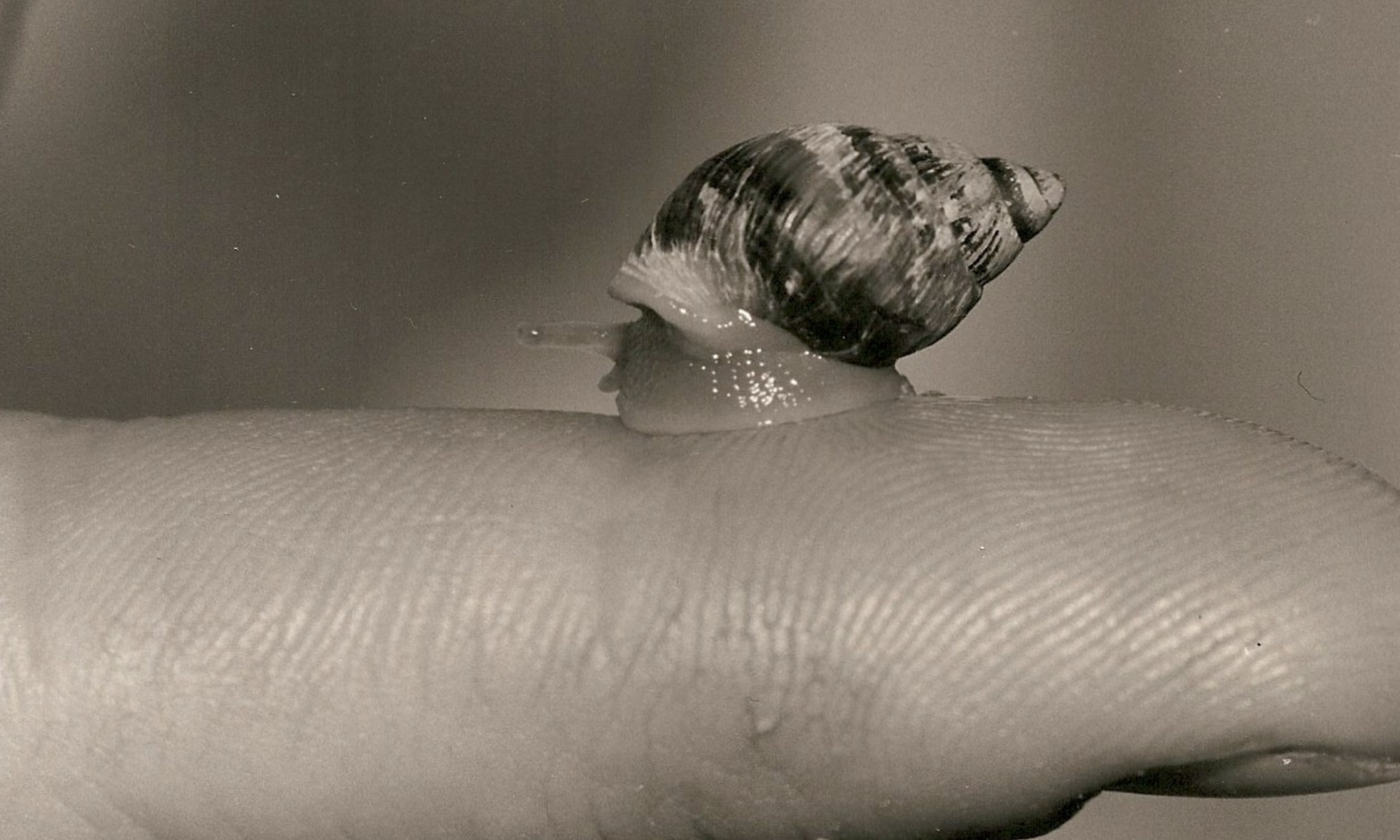 This diminutive tree snail, native to French Polynesia, was among several species rescued from extinction by an FFI-funded captive-breeding programme. Credit: FFI

Among the multitude of unassuming molluscs on FFI’s radar is a recently described new species of ghost snail, named for its translucent shell, and known only from two limestone caves in Hon Chong. This 250-hectare karst ecosystem in southern Vietnam is home to the entire world population of over 30 different threatened species, six of which are critically endangered.

The late Dr Tony Whitten was the original driving force behind FFI’s decision to engage constructively with the cement manufacturers whose quarrying activities arguably pose the greatest threat to the karst habitat on which the Hon Chong ghost snail and countless other cave-dwelling invertebrates depend.

Speaking back in 2016 on behalf of the IUCN SSC Cave Invertebrate Specialist Group that he co-chaired, Dr Whitten said: “The data are startling. We believe there is nowhere else on Earth where such a high concentration of species faces such intense risk – the scale of the likely extinctions if cement companies continue their activities unchecked is really quite shocking.”

A whale of a snail

If you’re not haunted by the prospect of losing the diminutive, diaphanous Hon Chong ghost snail, perhaps we can interest you in a monster at the other end of the snail spectrum.

Alongside our partners on the remote island of Príncipe, a UNESCO Biosphere reserve in the Gulf of Guinea, we are preoccupied with protecting a forest giant that has undergone a precipitous population decline – down 75% in the last two decades.

The Ôbo snail, as it is known locally, was historically a victim of overharvesting. More recently, this croissant-sized creature has succumbed to the loss of its forest habitat and appears to have been outcompeted by the invasive West African giant snail across much of its former range. By protecting its forest home, we hope to bring the Ôbo snail back from the brink. It’s ‘only’ a snail, but if we’re instrumental in orchestrating its survival, that will be music to our ears. 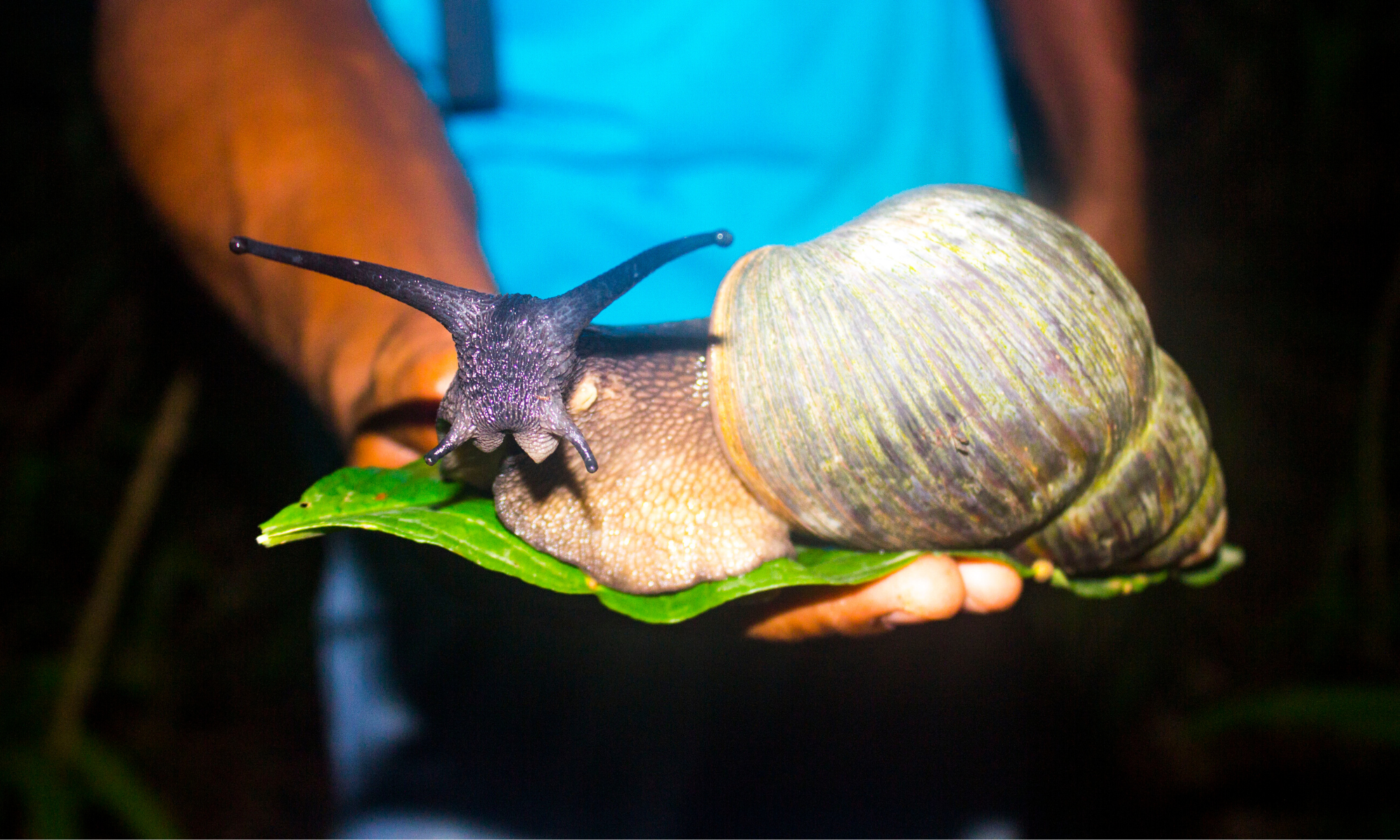 The gargantuan Ôbo snail is now confined to less than 50 square kilometres of protected forest in the south of Príncipe. Credit: Estrela Matilde/Fundação Príncipe

So, why this obtuse obsession with the obscure? These snails have a symbolic significance that transcends their own intrinsic right to survival. They represent neglected species everywhere and fly the flag for neglected nature as a whole.

To quantify that neglect, we need only compare annual expenditure on defence (billions of dollars) and activities that harm biodiversity (35 banks have lent US$2.7 trillion for fossil fuel projects since 2016, according to a Rainforest Action Network report) with current levels of investment in the very thing that keeps us all alive (clue: it’s a fraction of the many hundreds of billions that recent reports tell us we should be spending). This wilful refusal to invest in safeguarding the life support systems that prop up our planet would be laughable if it didn’t have such catastrophic consequences.

We need to invest in nature in all its forms, including the lowly snail. Biodiversity loss, climate chaos and the plight of the world’s poorest people are bound together inextricably in a web no less complex than the natural ecosystems we collectively call home. In that web of life, all species are equal. We need to recognise that rhinoceros beetles are as worthy of attention as rhinos.

We’re not naive enough to suppose that a ‘Save the Snail’ campaign will set the world alight, or pull in the major donors. That said, the etymological aptness of Microsoft providing support to something minuscule and mushy must surely be a strong draw – and the Shell story practically writes itself.

And is it too much to hope that a school strike for snails might put endangered molluscs on the map in the same way that Greta Thunberg and friends pushed climate change to the top of the political agenda? ‘Sweden’s snail saviour’ undoubtedly has a certain ring to it.

Flippancy aside, viewing snails as superfluous in the grand scheme of things – and sacrificing them on the altar of expediency because we can’t splash the cash beyond species with superstar status – is a slippery slope. That’s several small steps away from writing off the impact of climate change on the world’s most impoverished, disadvantaged and disenfranchised as collateral damage.

This entire year feels like one long drawn-out pivotal moment – a nanosecond in Earth’s history, but a cosmically significant period for the future of our planet and its remarkable but rapidly diminishing biodiversity. All eyes will be on the world’s leaders in Kunming, as they will at the subsequent climate COP in Glasgow. The issues they will be addressing are two sides of the same coin, and need to be treated as such. Unless we start putting nature first – and not merely megafauna, but everything from molluscs to mangroves – all the talk about tackling climate chaos will be just more hot air.

The plight of the pygmy hippo

Sturgeon on the brink

Let's not neglect Our One Home

We're calling on world leaders to invest an initial $500bn a year to safeguard nature in all its forms.