In March, I received an exciting message from the cao vit gibbon monitoring team in the Bangliang Nature Reserve in southern China – they had recorded a newborn baby in one of the gibbon families under long-term monitoring. This was a very exciting event as these gibbons were thought to be extinct until rediscovered by a Fauna & Flora International (FFI) team in 2002.

The team from Bangliang asked me to name the baby, as a sign of gratitude to the FFI team in China for our continued partnership and funding support – a great honour which made me very happy and satisfied. However, after thinking of several names for the baby, an idea came to me: why not let those who share the same environment as the gibbons name the baby? 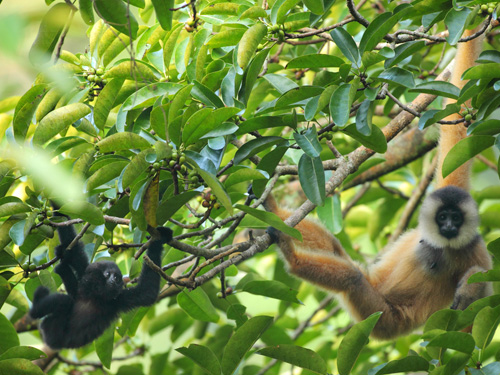 The last cao vit gibbon population consists of 129 individuals living in a karst forest on the border of China and Vietnam. Credit: Zhao Chao/FFI.

In the film Breakfast at Tiffany’s, Audrey Hepburn finds a cat and wants to give him a name, but she says, “The way I see it, I haven’t got the right to give him one. We don’t belong to each other.”

But I believe the middle school students who share the same land with the cao vit gibbon definitely have the right to name the gibbon. You could argue, after all, that the gibbons’ future is right in their hands as they are the next generation who will live on the land, hopefully in harmony with the gibbons.

The gibbon monitoring team from Bangliang was happy with this idea, and decided that a competition would be run so that the students could name all 12 gibbons from the two families in the Nature Reserve, in order to help raise awareness of these Critically Endangered primates. 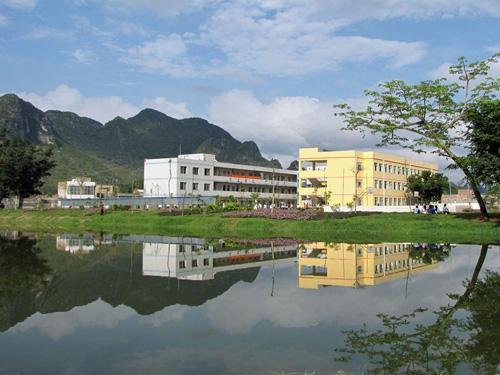 As a result, FFI and Bangliang Nature Reserve held a naming activity in two junior middle schools from the adjacent communities between the 9 and 23 September 2013. Firstly, we introduced the students to the cao vit gibbon and the role of the Bangliang Nature Reserve, and then we handed out the naming forms. In total, 400 students took part in this event and 166 of them completed and submitted the naming forms. 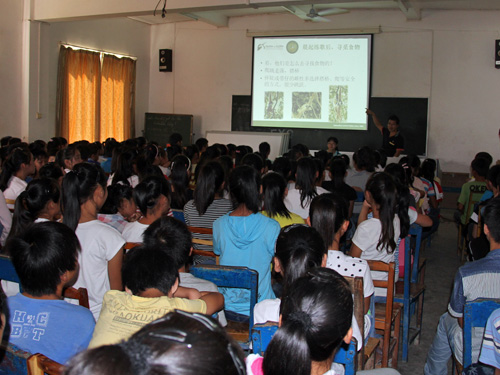 One week later, we collected the forms, chose three potential names from the naming forms for each gibbon and invited the public to vote online for their favourite name between 16 and 22 September. Finally, on 23 September, FFI and Bangliang Nature Reserve presented awards to the 12 students whose name ideas were chosen, and also distributed books on natural science to two junior middle schools and six primary schools for after-class-reading. 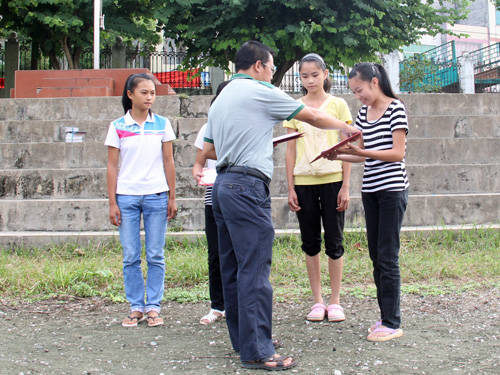 Personally, this was the first time I had an opportunity to communicate closely with the children of the Bangliang Nature Reserve in Guangxi, and I found it a wonderful experience; their eyes are as clear as crystal and full of curiosity, and while they were shy to speak in public they became very chatty in private!

Questions flew out from the crowd once the gibbon monitor mingled with the students after the presentation. We found some questions were very professional and impressive – for example, “Why does the gibbon family have one father and two mothers?” A very good question, and one that many gibbon researchers are still working on.

However, the most interesting part for me was reading the naming forms. In China, naming new family members is a very important task, and the names that are suggested are always accompanied with good wishes for the child, and love for the family. In keeping with this tradition, these lovely students also wrote down their wishes for the cao vit gibbons, alongside their suggested names. 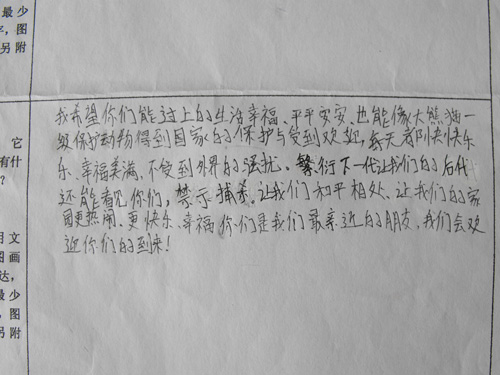 A student writes best wishes for cao vit gibbons, hoping they become as popular as pandas so they can be protected with the same effort. Credit: Wu Huiying/FFI.

From these wishes it was clear they had understood that the gibbon, the forest and people are highly dependent on each other for their existence and development. The students wished to protect the forest where the gibbons live, and to become friends with them. They wished that everybody would pay as much attention to the gibbons as to the panda and make the same effort to protect them, because there are far fewer cao vit gibbon than pandas at the moment. 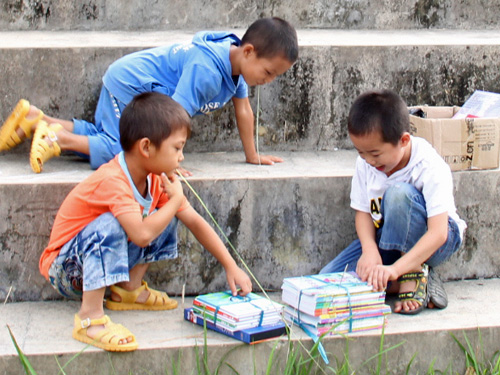 When we asked at the beginning if any of the students had heard about the cao vit gibbon or Bangliang Nature Reserve, the students’ eyes were totally blank and lost. Two days later, they said hello and called us “the gibbon people” when they bumped into us in the town.

The new baby was named ‘Yiyi’ which translates as ‘Dependent’. Her new name reflects how Yiyi is dependent on both her mother and on the protection offered by local communities.

It’s a sign that all of our work to involve the communities has really paid off, and that the children have been inspired to take a greater interest in the gibbons. To me, this is the most important thing.

It was a really wonderful thing to see, and hopefully it will motivate these communities to protect the gibbons’ habitat into the future.