One meets a good many inspiring, dedicated, professional people in the conservation world. Indeed, that is one of the facets which makes my job so enjoyable. But the people who inspire me the most are those who do not have degrees, other formal training, and thick CVs, but who try to conserve the wild nature around them.

One such is Mr What’s-His-Name. Honest. His name is Pak Anu which is not funny in his home on Halmahera Island, but ‘anu’ in Indonesian means ‘what’s its name’.

Some 20 years ago Pak Anu (third from the right in the top picture) was a 15 year old villager in Halmahera whose life was suddenly changed when a former London policeman turned professional birder – David Bishop – hired him to help with bird surveys on Halmahera.

Pak Anu thought it was all rather a bore and really couldn’t see the point of it other than earning a wage; but when he started to use binoculars to see the birds better, and to learn names for the birds he saw, his interest grew.

The beautiful birds of Halmahera

Halmahera is a weirdly shaped island, a bit like a long-legged bird creature flying westwards, which lies between Sulawesi and the island of New Guinea. Together with the smaller islands around it, it has quite a number of endemic birds such as the Goliath Coucal the world’s largest cuckoo, the White Cockatoo, and the large, ground-dwelling Ivory-breasted Pitta (which looks like a child has painted it).

The star of Halmahera’s birds is Wallace’s standardwing, the western-most bird of paradise. This bird was discovered for science in 1858 by Alfred Russel Wallace (or more accurately by his young assistant Ali) on the neighbouring island of Bacan. It is remarkable not just for the two white banners which flow from the top of its wings, but also for a shimmering breastplate which extends during the males’ display. These displays are made from particular trees as dawn breaks. 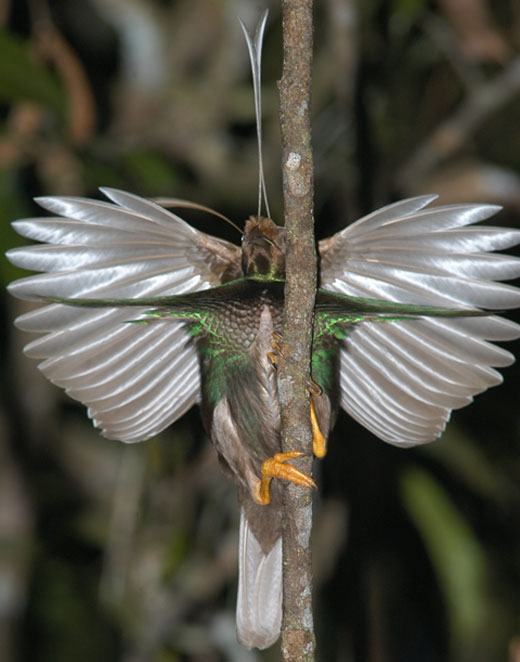 I saw this display with Pak Anu some six years ago when I was working on a project to support the conservation of the island’s Aketajawe-Lolobata National Park, and it was great to see it again.

Pak Anu lives in what could best be described as ‘a rude dwelling’ on the edge of a forest which has the official status of Limited Production Forest. He is frustrated that this is not given any protection and has watched ‘his’ population of standardwings at this site diminish steadily over the last decade or so as the forest is encroached, felled, and explored by hopeful mining companies.

He has done what he can to get it attention and protection, he has been given a provincial environmental award, but no government agency has actually helped the site’s integrity. He has thus more or less given up on this site – and is starting all over again on the other side of the island at a site where there are abundant birds and which is very close to the National Park which affords a degree of protection.

I told him I’d write to everyone who has signed his visitors’ book to see if I could raise some modest money to help his new endeavour get off the ground.

Visits from the great and the good

The short video features the harsh caw of the standardwings as they flit between the high branches. Although we got good views we weren’t able to capture them well on film; however the photograph above (which Riza Marlon of Burung Indonesia has kindly given me permission to use) shows this amazing bird in more detail.

Pak Anu keeps a visitors’ book and it records the great and the good in the birding world who come to seek his help to see the standardwing. The list also includes a number of staff of TV companies who have used the footage taken in ‘his’ forest to show to the public.

This includes the BBC which used about 10 minutes of film from here for Attenborough in Paradise on birds of paradise.

The enthusiastic comments written by his visitors have a bitter-sweet effect on Pak Anu because, he told us as we chatted into the night by candlelight, none of the TV companies seem to have ever sent a copy of the film he facilitated for them. I said I’d try to rectify that.

It was wonderful to see these stunning birds and I think Wallace would have been pleased to meet and talk away the evening with Mr, er, What’s-His-Name.