Meeting the green giant of Sabah

Like two whirling gyroscopes, a pair of gibbons circled the huge emergent tree. With reckless power and precision, the pair made gravity defying swings in smooth, graceful arcs, as they flew around the tree in faster and faster orbits. Witnessing the morning territory calls of this gibbon family, deep in the dipterocarp forests of the Maliau basin of Sabah, Malaysian Borneo, is a spectacle I hope never to forget.

It seemed clear that the gibbons were making a deliberate show of strength, and it was the majestic tree species Dryobalanops lanceolata that formed the platform and centerpiece for the display.

Standing some 70 metres tall, D. lanceolata provides a lofty purchase for epiphytes and forms a cornerstone of this wonderfully rich ecosystem. With its smooth, straight trunk and supporting buttress roots it ascends to great heights, not branching until it reaches the canopy, where it forms a terminal crown. It is this imposing green cloud of branches that creates a magnificent setting for the gibbons’ ritualised display. This growth strategy is common among dipterocarp trees and has allowed them to dominate the lowland forests of Southeast Asia, forming the tallest tropical forests anywhere in the world. 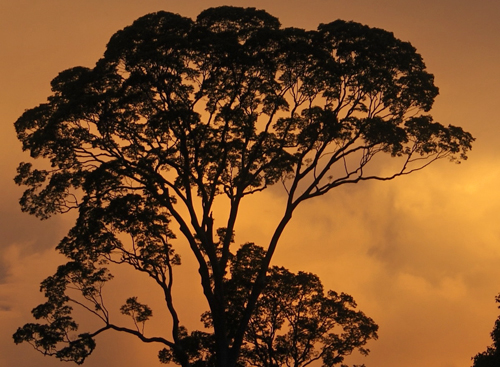 Before joining Fauna & Flora International (FFI), I carried out research at the Stability of Altered Forest Ecosystems (SAFE) project. This gave me the opportunity to visit the Maliau conservation area, known as the ‘lost world of Sabah’. Encircled by rugged mountains, it holds a largely pristine ecosystem and forms one of the last strongholds of D. lanceolata.

Looking at this tangled forest scene, I had the impression that the great height of these dipterocarp giants had built an extra layer onto the multi-story complexity of tropical forests. Compared with the lower canopy forests I’ve studied in Africa, these dipterocarp forests looked like built-up, biological city centres, with D. lanceolata making up the highrise, living skyscrapers.

A big tree in a small forest

Southeast Asia has the highest annual rates of deforestation in the tropics and the greatest proportion of threatened vascular plant species. The region has already seen the extinction of species such as Dipterocarpus cinereus, and D. lanceolata is listed as endangered on the IUCN Red List of threatened species.

In the Malaysian state of Sabah, there has been a rapid decline in the extent of natural forest area, from around 86% of the state in 1953 to less than 50%. This loss is largely the result of timber extraction and the expansion of the palm oil industry, which has seen a more than fourfold increase in production between 1980 and 2000. This increase has been concentrated in Malaysia and Indonesia, which now account for more than 80% of global palm oil production.

These statistics came sharply into focus for me just as I was leaving Borneo; perhaps helped by the clarity that the end of a trip often seems to bring. Looking out of the plane window as we cross Sabah and headed back towards the west, the view below was superficially positive. From a few thousand feet, the ground looked like a green expanse. But in truth, this landscape is in a biodiversity crisis.

Row upon row of oil palm estates dominate the lowlands, with a few dusty roads to feed the rising global demand for palm oil. Just because the view is green from a distance does not mean that this is a hospitable landscape for tropical giants like D. lanceolata.

Hope for the future

The Global Strategy for Plant Conservation is adamant that halting the loss of plant diversity is one of the greatest challenges facing our planet. And nowhere is this challenge more apparent than in Borneo.

Across the border from my study in Northern Borneo, FFI has been working in Ketapang district of Kalimantan, the Indonesian state of Borneo. In collaboration with village communities and pro-active government officials, FFI has been supporting the development of community forestry initiatives, helping local communities to take responsibility for the restoration and sustainable use of their forests.

With support from the Global Trees Campaign, FFI is ensuring that rare and threatened tree species like D. lanceolata are included in these initiatives. While many tree planting programmes across the tropics only focus on common, easily grown species, community projects in Ketapang are receiving technical support to grow and plant out seedlings from a range of threatened and impressive dipterocarp trees into these forests.

Initiatives such as these, in conjunction with the effective conservation and enforcement of protected areas, will be key to ensuring that floral oases, like the lost world of Sabah, do not become lost forever.