Kate West is Project Manager of FFI Cambodia’s Coastal & Marine Conservation Project. After graduating from the University of Oxford with a degree in Biological Sciences, Kate worked on a small island nature reserve in the Seychelles before returning to study for a Conservation Science Masters at Imperial College London. Her Masters research took her to the coastlines of Senegal and Guinea in search of the West African seahorse, which had never been studied or photographed before in the wild. This experience in West Africa helped her to secure an exciting short-term role with an organisation leading the campaign against illegal fishing before she joined FFI in early 2013. Kate has worked for FFI as both an independent consultant and a Marine Project Officer in Cambridge.

The oceans cover more than 70% of our planet’s surface and up to 80% of all life is found within them. But despite their importance and beauty, they are often seen as little more than a ‘limitless’ supply of food and other resources or as a place to dump waste. This out of sight, out of mind attitude is beginning to change, but there is still a long way to go.

But to mark World Oceans Day on 8th June, staff at Fauna & Flora International (FFI) and partners wanted to focus, just for a moment, not on the threats our oceans face but on the diversity of life that makes the marine environment such an incredible place to work.

Join us as we dive beneath the waves and share with you some of the delights to be found there (or you can view these on a map).

Zafer Kizilkaya works for FFI’s partner – the Mediterranean Conservation Society – in the Gökova Bay Marine Protected Area, Turkey. On a recent visit to Raja Ampat in Indonesia’s West Papua province, he caught a rare photograph of the fascinating mating dance of the beautiful mandarinfish. 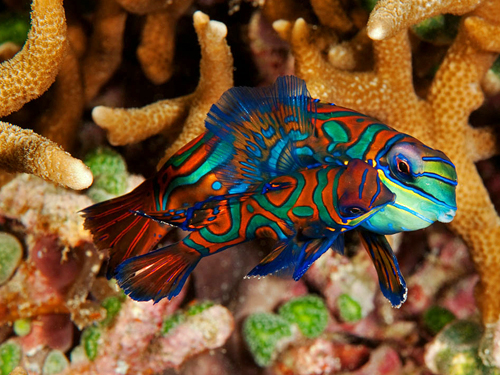 This strikingly beautiful animal is very difficult to see during the day, but just before sunset the females emerge from underneath their hard coral cover and look around for males displaying courtship behaviour. A chosen male will then be joined by a female and the dance starts. They slowly rise about a metre above the reef, and at the peak release sperm and a cloud of eggs.

Then the male heads off to look for more dance partners, and will likely mate with several more females.

Although this unique behaviour takes place almost every evening in the tropical waters of the Indo-Pacific, it is rarely seen.

Kate West is a project officer for FFI and is seconded to FFI partner, the Blue Marine Foundation. Before joining FFI, Kate carried out a primary investigation into the trade of West African seahorses, Hippocampus algiricus for her Masters degree at Imperial College, London.

These fairy tale-like creatures have an incredibly unusual reproductive behaviour: after mating, the female seahorse deposits the fertilised eggs into a pouch on the stomach of the male, who then carries the eggs until the tiny seahorses are fully developed.

First ever video footage of a West African seahorse in the wild. Video courtesy of Project Seahorse.

Whilst out on an artisanal fishing boat off the coast of Senegal, Kate was fortunate enough to film the species in the wild. Seahorses make excellent flagship species for conservation – not only because of their charisma but also because threats to their survival (such as shrimp trawling, pollution and seagrass destruction) also affect many other species and habitats.

“Being able to photograph and film the species in the wild was a once in a lifetime experience that I will never forget!” Kate says.

Every year during the turtle nesting season on Maio Island, national and international volunteers join staff from the Maio Biodiversity Foundation and guards from local communities to patrol beaches and ensure that Endangered loggerhead turtles have a safe environment in which to nest.

One early morning at sunrise, Denis, a volunteer form Sao Vincente, was patrolling the beach in Santo Antonio (an area that just couple of years ago had one of the highest rates of turtle killing and nest raiding), when he noticed a female who had just finished laying her eggs.

It is quite rare to see a turtle nest in the daylight, and Denis waited until she had finished before covering her nest and watching in awe as she safely went back to the sea. 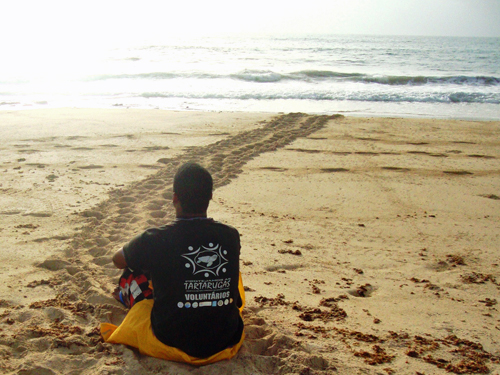 Katie Lee-Brooks is Fauna & Flora International’s marine programme manager. Her top marine memory is of snorkelling and free diving with manta rays in the Maldives.

What’s so special about these animals is that – despite the fact that they are the largest rays in the world – they feed on zooplankton, some of the smallest organisms in the sea. 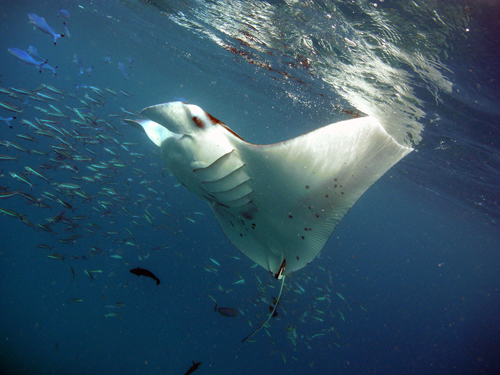 Surviving on this planktivorous diet, their lives follow the changing seasons and the ebb and flow of the tides to make the most of this ephemeral food source. There are, however, a few places in the world where (for just a few hours on a few days a year) the conditions are just right to ensure an abundance of food that attracts these ocean giants in large numbers.

“I have been lucky enough to swim with over 200 manta rays in a single afternoon and it was an experience I’ll never forget!” says Katie.

On a recent trip to survey the reefs of Myanmar, FFI’s Sophie Benbow was struck by the huge wealth and diversity of life in the waters of the Myeik Archipelago.

With several years’ experience diving in the Mozambique Channel, Sophie was pleasantly surprised to see some old friends amongst the fish species found in the Andaman Sea including her very favourite – the wonderful slingjaw wrasse.

But Sophie’s top marine moment wasn’t spotting sea slugs as large as her arm; it wasn’t even her first sighting of a sea snake. In her words: “My top ocean moment was the privilege of working with some very excellent marine science experts and in particular having my eyes opened to the huge variety of life living within the fabulous coral.” 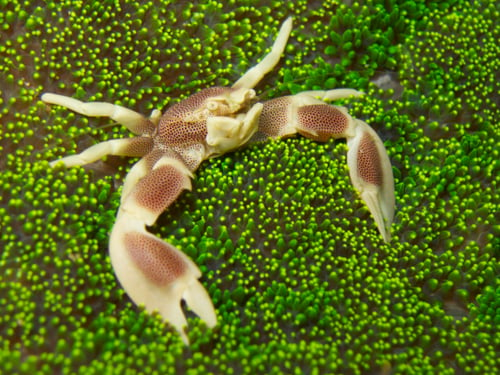 When diving, look out for small and hidden treasures like this tiny porcelain crab which is about the size of your fingernail. Credit: Lawrence Davis/FFI.

“There is so much to see beneath the waves if you know where to look, so the next time you are diving and you can’t see any of the traditional crowd pleasers (like tuna, sharks and turtles), turn your attention to the little things in life – take a closer look at the corals, sponges and anenomes. You will be just as amazed by what you find!” says Sophie.

FFI communications officer Sarah Rakowski learned to dive in the warm, clear waters of the Bahamas. On her first certified dive she was lucky enough to catch a glimpse of a spotted eagle ray. These large marine animals, which are related to sharks, have triangular fins, a white underbelly and pointed snout; the back is a dark, midnight blue with white spots.

Though they feed on bottom-dwelling shellfish, they spend much of their time cruising through the open water. “It absolutely took my breath away,” says Sarah. “This graceful animal was so beautiful to behold – it looked like a slice of night sky flying through the water with slow, elegant sweeps of its fins.” 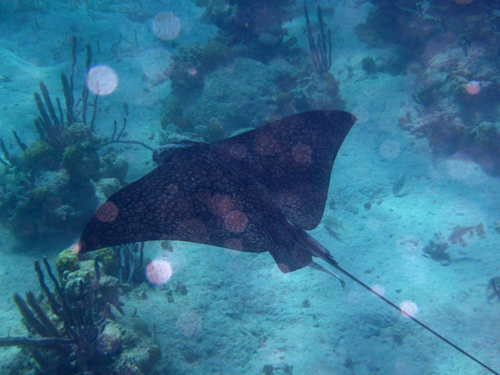 Little did Sarah know that nine years later she would have the opportunity to see these creatures again. While visiting Turneffe Atoll Marine Reserve in Belize – an FFI project site – she was offered the chance to join a snorkelling tour of the reserve.

“The Bahamas and Belize are geographically quite close and share a similar climate, so I was delighted – if not surprised – to see many familiar species, from colourful parrotfish to grumpy-looking groupers,” says Sarah.

“But I had heard that Turneffe was a ray hotspot, so most of all I hoped to catch a glimpse of an eagle ray again. I soon got my wish! Within minutes of jumping in, a curious ray appeared, circling lazily around us as we swam. It would disappear at times, only to reappear again later to get another look at these strange, clumsy visitors to its watery home.”

Kate West is Project Manager of FFI Cambodia’s Coastal & Marine Conservation Project. After graduating from the University of Oxford with a degree in Biological Sciences, Kate worked on a small island nature reserve in the Seychelles before returning to study for a Conservation Science Masters at Imperial College London. Her Masters research took her to the coastlines of Senegal and Guinea in search of the West African seahorse, which had never been studied or photographed before in the wild. This experience in West Africa helped her to secure an exciting short-term role with an organisation leading the campaign against illegal fishing before she joined FFI in early 2013. Kate has worked for FFI as both an independent consultant and a Marine Project Officer in Cambridge.