What feels like a lifetime ago, I was lucky enough to spend a summer on Andros Island in the Bahamas, a sparsely-populated island that boasts the third-largest barrier reef in the world.

I was there to carry out coral reef surveys as part of an eco-volunteering programme, but as this was my first time venturing beneath the waves, I had much to learn. Besides getting to grips with scuba diving and the technicalities of biodiversity survey techniques, I had to learn how to identify and record the marine life I was about to encounter.

So when, almost a decade later, I found myself reading a blog post by my colleague Zau Lunn about his experiences while learning to dive in Myanmar, I felt a real sense of familiarity – even comradeship.

Zau Lunn is Fauna & Flora International’s (FFI) Marine and Coastal Programme Coordinator in Myanmar and was learning to dive as part of a concerted effort to learn more about the biodiversity of Myeik Archipelago in the south of the country, which has been proposed as a World Heritage site. 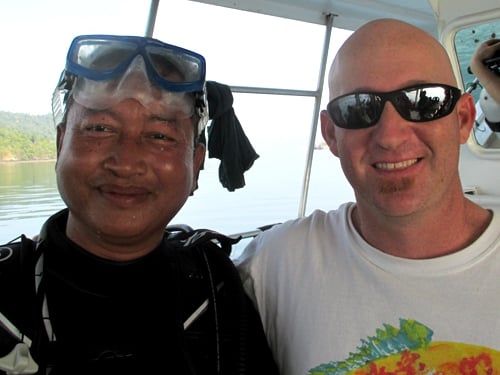 Zau Lunn and Seabird McKeon on a marine expedition in Myanmar. Credit: FFI.

Like me, Zau Lunn and his fellow trainees had to learn not only the practical aspects of diving but also how to readjust their mindsets to cope with the stress of being, quite literally, out of their element.

As anyone who has ever dived can attest, the underwater world can seem almost other-worldly.

Strange, muffled noises mingle with the rhythmic sound of your own breathing – a soft hiss as you inhale, bubbles as you exhale. Light behaves differently too, so that objects look bigger and closer than they really are and colours (particularly reds) look muted.

But it is the weird and wonderful creatures, above all, that make our seas and oceans feel so alien. 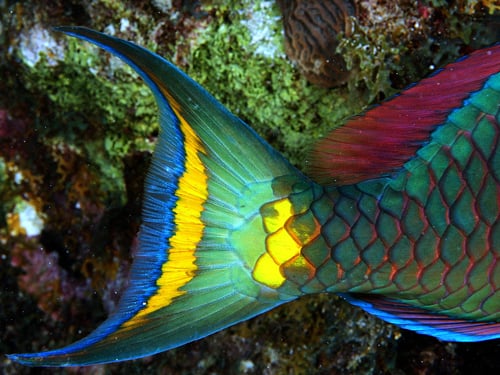 It is easy to miss the small treasures amongst all the bright colours of a coral reef. Credit: Kevin Bryant/Flickr Creative Commons.

As you learn to adapt to this strange environment, it’s only natural that your eye will, at first, be caught by the biggest, the boldest and the most beautiful. But the longer you dive in an area, the more you start to notice the backdrop and the smaller – more hidden – treasures.

Among these less flashy marine attractions are the invertebrates.

This loose collection of animals encompasses the vast majority of species in the animal kingdom – all those without a spinal column. Unlike vertebrates (animals with a spine), the term ‘invertebrates’ does not refer to a formal taxonomic group; rather, it is a term of convenience to collectively describe a diverse array of species.

In the marine realm, invertebrates range from hard-bodied crabs, lobsters and oysters to soft and fleshy octopuses, sponges, worms and jellyfish – and beyond. 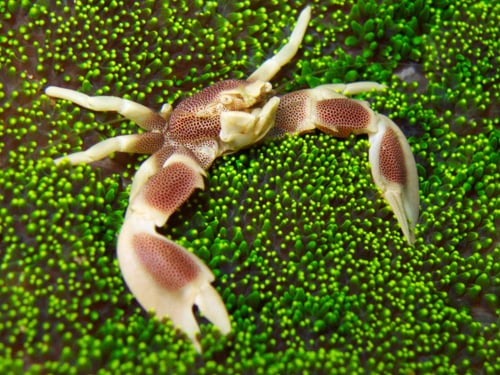 This tiny porcelain crab is about the size of your fingernail. Credit: Lawrence Davis/FFI.

As on land, the sheer number and diversity of invertebrates means that these species perform many important ecosystem functions.

Stony corals, for example, are tiny invertebrate animals that build reefs over time by secreting a calcite (essentially limestone) exoskeleton. These reefs are incredibly important ecosystems that support over 25% the world’s fish species and an enormous number and diversity of other wildlife besides.

It’s hardly surprising, therefore, that surveying a reef ecosystem can be a daunting task, especially in a place like Myanmar, where very little marine research has been done in the past.

Undeterred, Zau Lunn and his colleagues persevered in getting their Reef Check qualifications, during which they learned how to survey marine environments and identify key species. They then got right down to business, conducting some of the first assessments of Myanmar’s reefs. 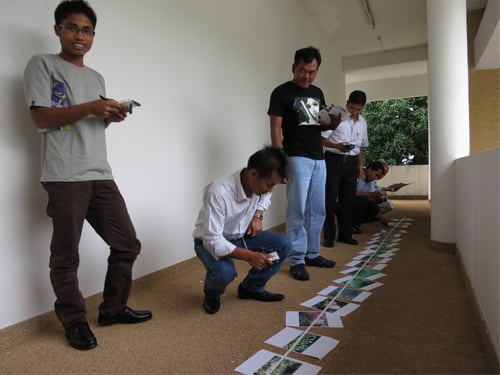 Their initial research revealed that while some sites had outstanding coral cover, others showed extensive damage from fishing.

To build the picture further, a group of international scientists joined the Myanmar team in March 2014 on an expedition to get a better understanding of the state and resilience of the reefs, and chart the biodiversity found there. This was intensive work: in just 11 days the team covered almost 500 miles and visited 35 sites – the majority of which had never been surveyed before.

Among many other interesting findings, the research revealed a huge diversity of invertebrates in the Archipelago, including around 300 hard coral species and a number of species that may be new to science.

Of course, the work doesn’t stop there. To help the Myanmar team and other conservationists to continue surveying these reefs accurately, scientists from the Smithsonian Institution (in collaboration with FFI and a number of taxonomic specialists) developed a fascinating Guide to the Reef Invertebrates of Myanmar.

The guide features beautiful images and details of the species. Speaking from experience, this kind of guide is an indispensable source of information for both novice and expert researchers, and will surely play an important role as this work progresses.

But this guide in particular offers something a little bit special beyond its scientific value: a reminder to look past the big flashy species every now and again, and keep an eye out for the little things.