Following the disastrous 2019/20 season, during which zero leatherback turtle nests were recorded in Nicaragua, Fauna & Flora International (FFI) is delighted to report that history has not repeated itself this year. Within the past few weeks, a number of females have already emerged from the sea and laid eggs at several sites in this crucial leatherback haven.

Historically, the three most important beaches for Eastern Pacific leatherbacks in Nicaragua have been Salamina Costa Grande, Veracruz de Acayo and Isla Juan Venado, all of which are situated along the country’s Pacific coast. FFI supports beach protection and monitoring at all three locations.

The complete absence of nests at these three priority sites last season was a devastating blow for everyone working to conserve the leatherbacks, with serious implications for the long-term survival of these mighty turtles, which have graced the planet since the time of the dinosaurs.

In this context, even a single nest is a cause for celebration, so the news that five females have already hauled themselves up onto Nicaragua’s beaches to lay their eggs so early in the 2020/21 nesting season has been greeted with appropriate fanfare. To date, this quintet of leatherbacks has produced 11 clutches of eggs (the fittest, healthiest females often make several nests). The team is now waiting for further good news over Christmas, as the first clutch laid is due to hatch any time from December 20th, and we are hoping that these females will return to lay more eggs in the coming days. 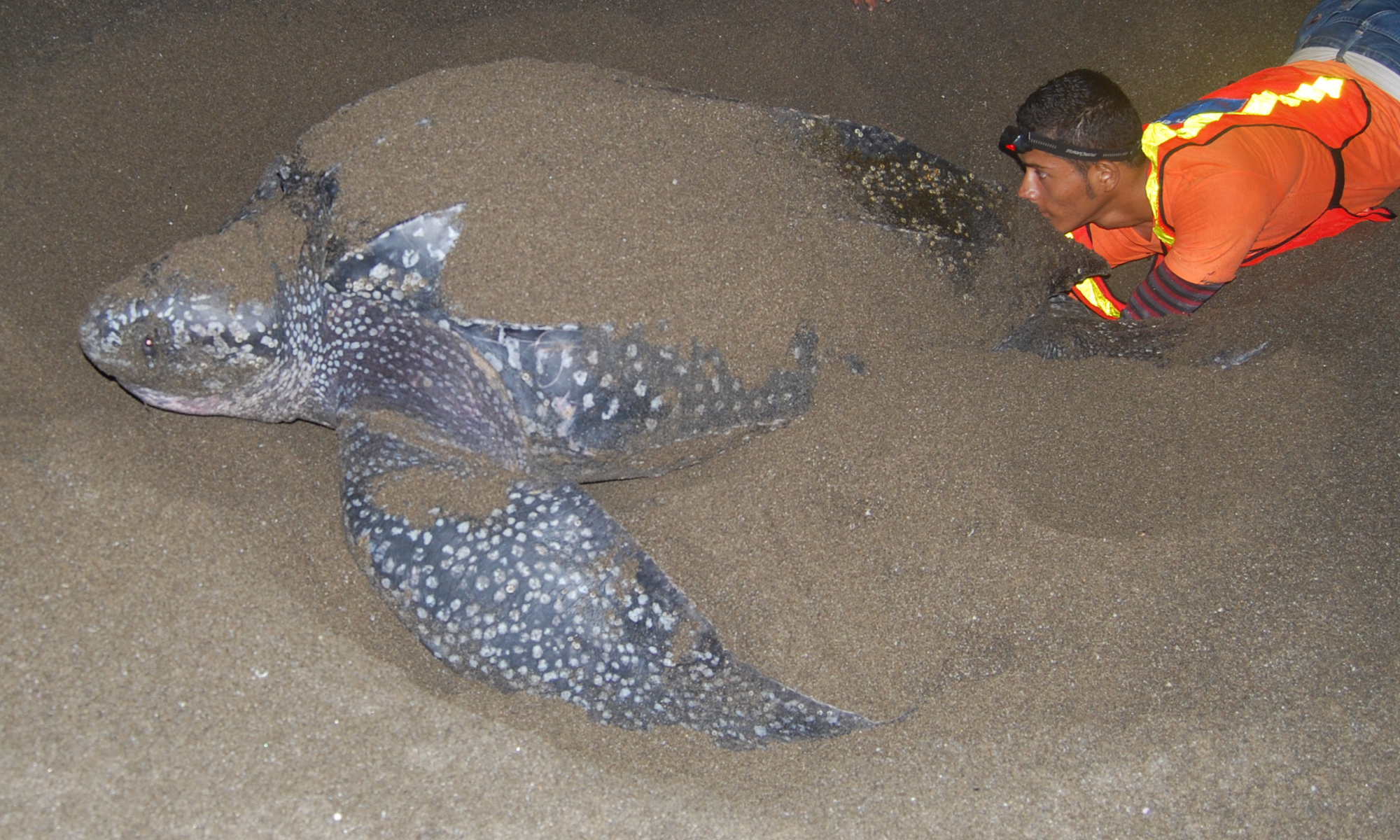 Community patrol team member collecting eggs laid by a nesting leatherback prior to transportation to the hatchery. Credit: Heydi Salazar/FFI

Interestingly, a total of 10 nests were also recorded out of season during 2020. Although unusual, this nesting behaviour is by no means unprecedented and is increasingly being observed in both Nicaragua and Costa Rica, probably as a consequence of climate change.

Regrettably, news of the six nests at Salamina Costa Grande – which is not a protected area – was slow to reach the team, owing to the fact that the eggs were laid out of season, so it was only possible to safeguard two of them. Unfortunately, neither of these hatched. Similarly, only one of four clutches laid unexpectedly at a second site could be protected.

Since the start of the official season, six leatherback nests – laid by just two females – have been recorded at Isla Juan Venado, while a single female has laid two separate clutches at  Salamina Costa Grande. Two further nests were recorded on a beach not normally favoured by this turtle species, in an area more renowned for the spectacular arribada, during which olive ridley turtles emerge from the sea in their thousands for their mass nesting extravaganza.

Meanwhile, at Veracruz de Acayo beach, it was a case of third time lucky. After two successive nesting seasons without a single leatherback nest, the field team’s patience was finally rewarded with the arrival of a nesting female on December 7th. The nest – which contained 53 eggs – has been successfully protected. 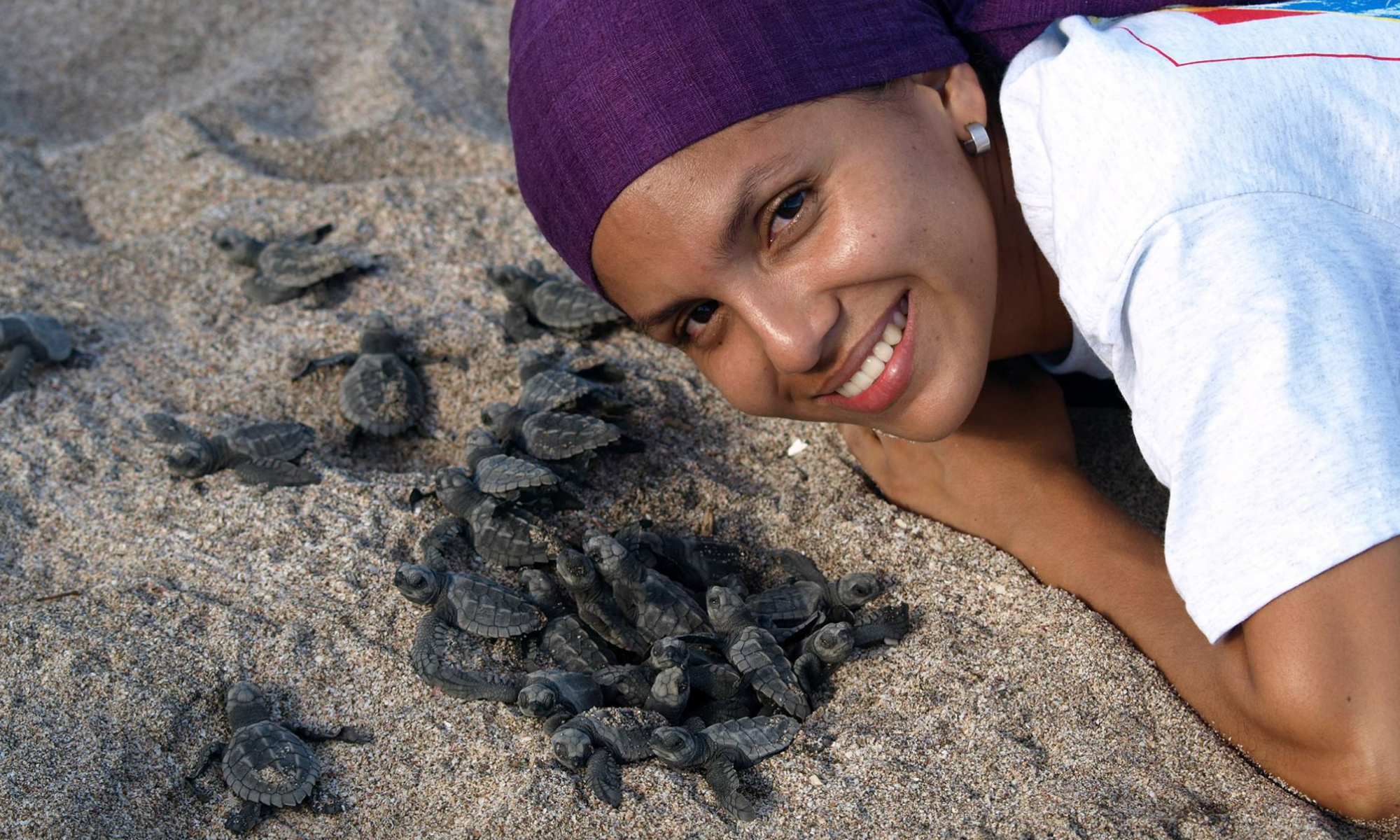 Susan Ramos, FFI’s resident field biologist at Veracruz, could barely contain her excitement: “I can´t explain the joy that all our team is feeling right now. We will continue waiting and working hard so we can protect more nests and also ensure this nest can successfully hatch.

Heydi Salazar, FFI’s biological monitoring specialist in Nicaragua (pictured, above), said: “Nicaragua still represents a real hope for the survival of this amazing species. We will provide further updates as the season progresses, but the initial signs are really encouraging.”

The world's largest sea turtle is facing a perfect storm of threats.
Please support our efforts to protect these incredible reptiles
on land and at sea.