Life with the langurs

“Martina! This is extraordinary!” exclaimed Felipe, trying hard to get pictures of the lolloping langur at distance. “I can’t believe I am looking at it, the langur! It is beautiful! This is unbelievable!”

Felipe and I met at the Conservation Leadership Programme’s (CLP) training workshop in Canada. Two years later, thanks to CLP’s Alumni Learning Exchange Grant, we were able to meet again in India, at my very own field site at Chamba in the Himalayas.

Felipe studies the Marci’s marmoset at the Aripuna River Basin in the Brazilian Amazon and I study the Chamba sacred langur in the western Himalayan district of Chamba, India. But although our work is far apart, our conservation challenges are similar!

So, we realised that an exchange visit would help us experience each other’s issues first-hand, brainstorm possible solutions and lay the platform for sharing inter-continental conservation knowledge and lessons.

And so it was that Felipe dropped in for a visit, straight after the International Primatological Society Conference in Hanoi, Vietnam. Vishal, my team mate, was assigned the complicated responsibility of locating and identifying Felipe at the crowded Chamba bus station.

After a gruelling 17 hour bus ride from Delhi, Felipe arrived at the field station, surprisingly fresh faced and brimming with excitement and enthusiasm. “How did you find him?” I asked Vishal. “The CLP T shirt! It wasn’t that difficult!” chuckled Vishal.

Felipe was both excited and a little worried about the langur surveys we had planned. Now, everyone who has been out on wildlife surveys will know that sighting the animal we most want to see is, more often than not, more about luck than technique. The langurs were near our field station a few days before Felipe’s visit and now, when we were out looking for them they were nowhere to be seen.

We were all a bit disappointed. What if he doesn’t get to see them at all? As these thoughts spun a good yarn around in my head, Vishal exclaimed “Oye! Langoooor!”
“Oh no,” I thought to myself. “Are we hallucinating langurs again?”

“Where?” I asked restlessly, hoping against hope. 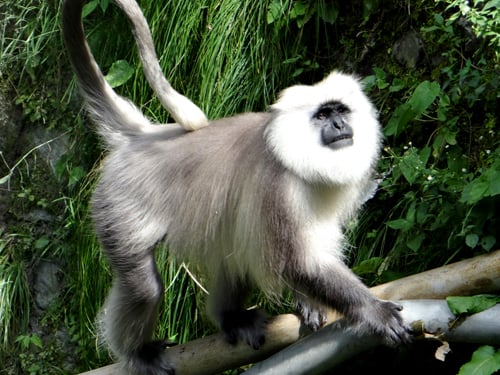 Chamba sacred langurs are mostly shy of human presence and prefer to stay inside the dense cedar and pine forests. Deforestation and many unsustainable development practices force langurs out of their degraded homes, into fields and human settlements, often resulting in conflict. This solitary male was indeed fleeing from a field, after being chased by the irritated owners.

We moved on, content and happy that all our effort did not go waste.

To the land of lamas and langurs

We spent the next day packing and warming up for Kangra Valley, a small Oriental town about 150 kilometres from Chamba. Kangra Fort is a tourist hotspot of historical importance as a Mughal stronghold and is also a key habitat for Chamba sacred langurs.

We set out early that morning through Jot, a 2,400 metre pass about eleven kilometres from the field station. Post-monsoon showers were in full swing and the mist folding and unfolding over the mountains set the scene for the unforgettable drive. 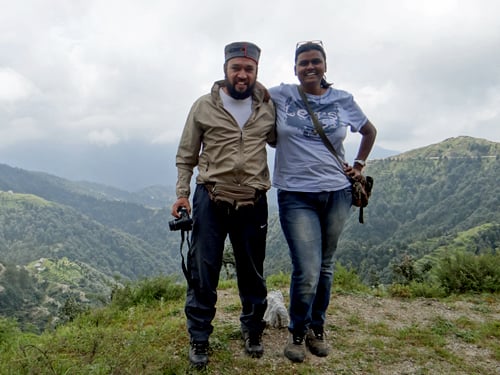 The scenery soon changed when we descended down the mountain to the valley. The cool breeze gave way to scorching heat and dust. After a quick wash and the ever soothing chai, we were heading to the fort when a good soul stopped us to inform us that it was closed for the day.

To make good of the evening, Vishal and Felipe set off to get a taste of the local area. The Brajeshwari Devi Temple in Kangra is an age old architectural marvel, and Felipe experienced a riot of colours, music and culture. 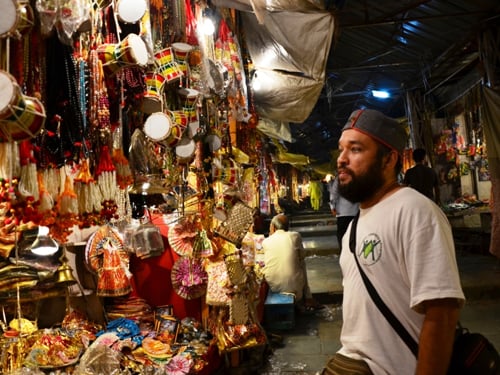 Felipe takes in the riot of colour at the market. Credit: Himalayan Langur Project.

The next day, we set out to visit the fort. Built in early 4th Century, it has seen many a conquest and loss and has stood the test of time, through natural and other calamities.

The sun was overhead and the heat was unbearable. We trudged our way through the ancient walls and were about to enter the main fort when we saw something move on the trees. Yes! We had found the langurs! After couple of hours of observation, they started to move down the mountain. Content and satisfied with what the day had left us with, we drove straight to Dharamshala, the land of the Dalai Lama. 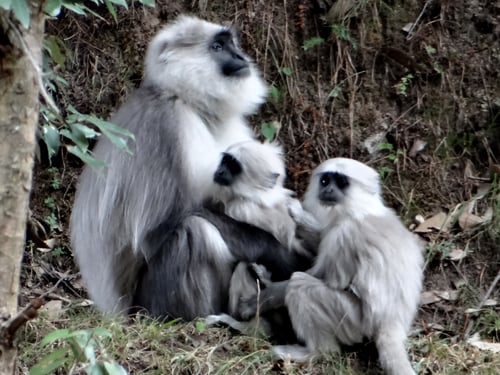 Nestled amidst the Dauladhar ranges of the western Himalayas, with peaks ranging from 1,400 to 4,000 metres, Dharamshala boasts beautiful high-altitude cedar and pine forests, and our langurs of course.

But despite our many attempts to find langurs in Dharamshala, they proved elusive and we were unsuccessful. But the gentle monsoon showers and the picturesque mountains made the experience worthwhile. Also, Felipe got to spin the prayer wheel and meet the lamas, so all was well.

It was a great ten days with Felipe. There was a great exchange of ideas and experiences real conservation challenges in the field. We realised that these challenges are no different from each other and it was so useful to share such international knowledge to help us arrive at a holistic solution.

We were able to lay down our challenges side by side, look at them objectively, dissect and analyse the issues and arrive at solutions. 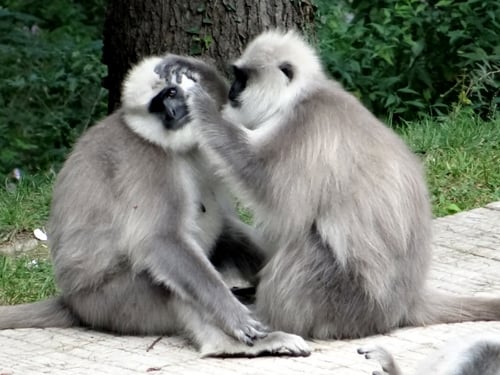 Grooming is an important social activity among many primates, and these langurs are no exception. Credit: Himalayan Langur Project.

“This was awesome, Martina!” said Felipe, as he said his goodbyes. As for my team and I, we were more than happy to have met and spent time with a conservationist from another world and know that we are not alone in our fight!