Tajikistan. Most people I speak to at home have never heard of the country, let alone know where it is! Tajikistan is mountainous, about the size of England, north of Afghanistan and east of China.

It was previously the southernmost Soviet republic, and relied on the Soviet Union for over half of its GDP, and almost all its technical and scientific expertise. When this support was suddenly removed in 1988, the country economically collapsed, and was left with almost no skills to manage its land and natural resources.

The five-year long civil war in the 1990s meant that many educated people fled to Russia or elsewhere. It is now the poorest of the former Soviet states.

The Tajik people speak a language related to Persian, though there are many tribal languages in the mountains including some endangered languages with only a few hundred speakers. The country is biologically very rich, and has the most dramatic and awe-inspiring mountainous landscapes I’ve ever seen – quite a contrast to the fens of Cambridge!

It is home to a few hundred snow leopards, a significant population in world terms, and ecologically important, as the Pamir mountains provide a link from the northern and southern populations.  There are also 84 mammal species, almost 350 birds and a wide array of interesting plants, especially at higher altitudes.

Impacts on the natural world

The people living in this remote area are very poor, and they struggle to meet the demands of life, particularly for fuel and firewood during the long and harsh winters. As a result the impacts on the natural world have been severe and increasing in recent years.

Scientific training has also suffered greatly since the breakup of the Soviet Union. The university libraries are fairly well-stocked, right up until 1987 – when their subscriptions and supplies abruptly stopped. Students are forced to rely on worn, dusty texts at least 25 years old, and often much older.

I visited Tajikistan this April, my third trip to the country, to deliver training on Biodiversity Survey and Monitoring.

This course was the most popular of all our training courses; from around 70 applicants, we chose 15 young, enthusiastic scientists, who are currently working in conservation in a range of fields: National Park scientists, government authorities, academics, and people working in local NGOs.

Considering the range of their responsibilities, their skills are very basic. Most are not familiar with the use of maps to navigate or plan their work, despite very accurate Russian military maps being readily available. While they can identify local species with great accuracy, they lack more recent and robust scientific methods for sampling the environment so that good conclusions can be drawn.

One area they really struggled was in understanding how to deal with the numbers of animals and plants that they counted. Statistics was never taught in Biology courses. Many of the students had never heard of concepts that are vital for biologists who monitor wildlife populations (Mean, Standard Error, Statistical Significance), and this tested my skills in helping them to learn and understand.

I aimed for a more informal training environment using familiar every day games and even simple gambling techniques to get across statistical messages. This helped communicate sometimes complex issues in a way that we all learned from and really enjoyed. It is amazing just how probability and statistics become far more fun when you’ve got pride (and sweets) at stake. 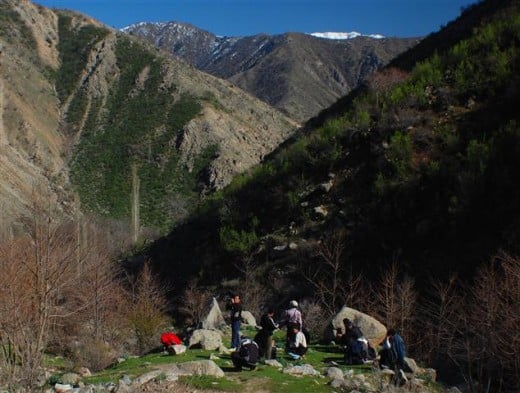 The training covered a range of methods, and hoped to cover the scientific principles which underpin successful conservation monitoring. These ideas will take years of experience to master, but we aimed to make a start, and will follow-up with several of the trainees, with on-the-job training including an upcoming expedition to the remote Zorkul Reserve during the short mountain summer.

The course is just one component of our broad-based training for Tajikistan. It is not just biological surveys that need more support, but the whole range of skills and knowledge that is necessary for good management of the landscape.

Along with our partners, we have developed a wide range of training, from international systems of protected area management through to how local livelihoods projects work on the ground.

I’m really excited that this project is building the skills and abilities of conservationists in Tajikistan, and we’ve reached almost 200 conservation professionals to date.  When they come to the training courses they also have the opportunity to make new friends and professional contacts that will help them address the serious challenges that lie ahead for biodiversity conservation in the country.