The humble and gregarious Godwin Limberg coordinates Fauna & Flora International’s (FFI) Murung Raya Sustainable Development and Conservation project in the northern district of Kalimantan, Indonesia. The project, based in Puruk Cahu, has a number of different elements, but the work I particularly wanted to see was the community conservation leadership programme.

Initially this programme intended to choose five community trainees to commence conservation related mentoring with training undertaken outside of Murung Raya. Having received an overwhelming response to invitations, Godwin arranged for the training to be done locally so now 20 people are able to participate.

A visit to the councillor

We visited a village close to Puruk Cahu, travelling across the wide Barito River and into Danau Usung village to meet councillor Badiansyah, who lives in a wooden house amongst his rubber garden. Sitting on his floor we planned our day; first stop – collect the Customary Head of the village to accompany us to the community forest area.

Danau Usung is on the Barito River, surrounded by seven lakes created by oxbows of the river. The village began campaigning for the management of their watershed forest in the 1990s. The villagers are hoping the District Head will decree their 300 hectare primary forest as ‘hutan desa’ or community forest, which means the community would have management rights over the forest and its ecosystem services which directly benefit the 600 members of the village. This forest is the watershed for their water supply. The benefits this community receives from the forest are direct, so inviting them to be involved in the community conservation leadership program was an easy sell.

After walking through the dense remnant forest, we sat down with the villagers and discussed the process of forest protection and the involvement of FFI in that process. As the discussion progressed it became clear just how important the community conservation leadership programme has been in improving the villagers understanding of issues regarding biodiversity and conservation management.

The initial training was in mapping; simple mapping with GPS and plotter paper. Following the training, the Danau Usung people were able to accurately map their forest for the first time, moving them one step closer to having their community management officially decreed.

The second training session focused on local biodiversity during which they learnt what species are threatened and require protection. As a result, participants have been able to communicate back to the rest of the village, beginning to change behaviours around what species are hunted, particularly threatened civet cats, gibbons and pangolins.

The most recent training was on communications. The participants believe this will assist them to raise support for their community management and to communicate the opportunities their forest may afford for eco-tourism.

Eco-tourism gets the nod of approval

During these discussions it was Badiansyah who spoke to us while the Customary Head sat in quiet contemplation. We asked him directly what he thought of the concept of eco-tourism. He took his time, clearly weighing his response. He came down on the side of eco-tourism explaining that it provides economic opportunities for the broader community but also for Danau Usung. Badiansyah continued to explain that while sustainable developments are key, they need FFI’s help to instigate such developments. He mused that being so close to the district capital, there must be potential to make ecotourism happen. 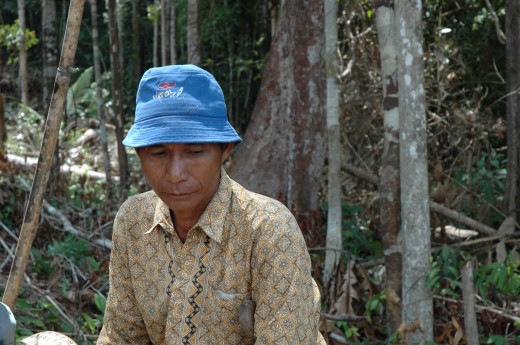 The final community conservation training, on balancing conservation and development through planning, will be held in September 2011. It is clear the village will be using this to plan various eco-tourism initiatives. The types of things they have in mind include using Badiansyah’s house as the access point to the village, displaying information about the area and its biodiversity. They are considering a series of guided walks through the forest and providing areas for people to sit amongst the forest to wait for the birds and animals to appear. They are interested in developing guided visits to caves in the area, morning walks to hear and (if you are lucky) see white-whiskered gibbons and proboscis monkeys while also enjoying views across Puruk Cahu and the seven lakes.

These villages have a vested interest in the services these ecosystems provide. With training and support provided by Godwin and his team, we can rely on them to manage that biodiversity sustainably. Subject to further funding, Godwin hopes to continue with a new round of community conservation training, broadening the conservation discussion across the district and engaging more communities in the management of biodiversity. And I hope to return as an eco-tourist.