It’s really not easy being green

As a child I had a fascination with frogs. Although I loved their mysterious appearance every spring and that first sight of the firm grey egg masses in the frigid March water of local ponds, to the frogs I was an enemy.

I caught them in my grubby schoolboy hands and kidnapped them from the important business of mating to keep them in my own makeshift habitat – a sunken ceramic trough in our garden. These days I try to make restitution for this. It is a familiar theme with conservationists: they started their careers being fascinated in the wrong way.

Even Fauna & Flora International (FFI) was formed by a bunch of game hunters who suddenly developed a conscience with the realisation that, without protection, the things they loved (albeit as prey) needed some help if they were going to survive the remorseless pressure placed upon them by human beings.

My interest in frogs never faded. Today, flicking through my 20 volume set of animal encyclopaedias that my parents bought me as a child, I can still find yellowed strips of newspaper, placed there in the 1970s, marking the pages on which each species of frog appear: Wallace’s flying frog, Amazonian horned toad, the delicate and transparent glass frog. Now many of these species have jumped off the page, as it were, and I have found them during night-time searches in the tropical rainforests of the world. 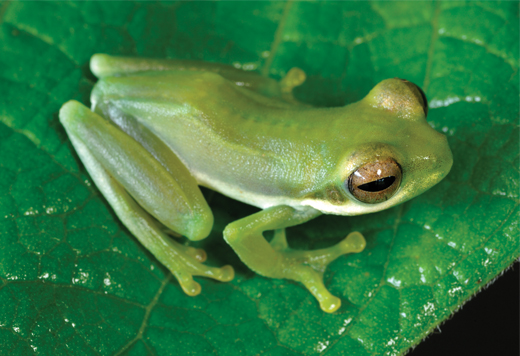 These days I don’t collect them, or interrupt the rhythms of their breeding. I trouble them only to be photographed, marvelled at for a moment, and then released back to their important business of surviving. I even try to do something more, to tell their stories, and through photography, try to assist in their conservation.

For 350 million years, amphibians existed in a world free of humans and the threats they bring. But in recent times, amphibians have suddenly found themselves in very dangerous and uncertain waters. There are some 6,250 species of amphibians known, and more are being discovered every year. But for each new discovery another known species either slides into extinction or faces the very real threat of doing so.

Habitat loss, over collecting, global warming and the horrors of chytrid fungus have all taken their toll. Amphibian Ark gives these statistics: 30% of known amphibian species assessed by the IUCN, are threatened with extinction; 6% are known to be Near Threatened, and 25% are Data Deficient. This equals over 3,000 species in trouble.

Now as humans we have to deal with the threat and step in to help.

The mystery of the green-blooded frog

In the last week of March I witnessed some recent frog conservation initiatives first hand when I represented FFI and Cambodia’s frogs at the Amphibian Ark workshop in Hanoi, Vietnam.

Amphibian Ark is a fairly new organisation formed to assess and initiate the conservation of rare and threatened amphibians. Workshops around the world bring frog experts together to determine which species are threatened and what the conservation community needs to do about it. The Hanoi workshop allowed five full days to assess the 280 or so amphibian species known from Indochina – that is Vietnam, Laos and Cambodia. This seemed like an abundance of time, but as it worked out was almost a perfect estimate of how long it would take us (the taxonomists, captive breeders, frog ecologists and interested amateurs) to run through a specific set of questions aimed at fully evaluating the threats to and needs of each species. 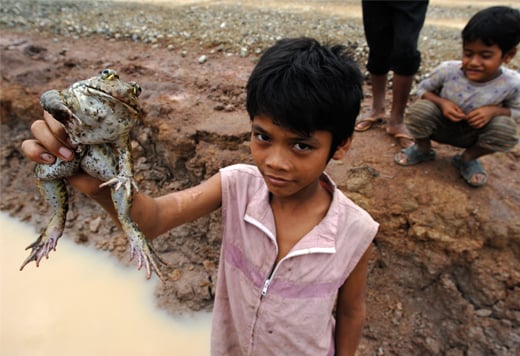 Interestingly, it was these two species that perhaps took the longest of all to assess. In the case of the rugulous frog it was because the workshop brought to light that, as a common species, this one had escaped the attention of most conservationists. Frog meat traders in Indochina have not ignored this species however, and numbers everywhere seem to be falling. One to keep our eyes on, and an indicator that frog meat trade surveys urgently need to be conducted.

For the Samkos bush frog we focused on how little was actually known about the species. Discovered only recently, it appears to be endemic to a very small and threatened area of the Cardamom Mountains. Is it found anywhere else? What are its requirements? How endangered is it? All things we couldn’t answer. But we do know that it is one of the few creatures on the planet that has green blood – a Mr Spock of the frog world.

I can’t speak for Spock, but the Samkos bush frog has green blood because, unlike most other creatures, rather than pass the bile biliverdin (green bile) out as a waste product it sends it back into the blood stream. Shine a light through the frog and one can see the vascular system like the green veins in a leaf, supported by bones tinted a delicate turquoise. No one knows why this species has green blood: increased camouflage, distasteful to predators – it is another blank in our knowledge.

Are there lessons to be learned from our amphibian friends?

One of the very specific questions Amphibian Ark posed of each species was ‘does it have any potential scientific interest?’ By this it meant, are there any chemicals, compounds or facts of biology that might make this species useful in scientific research? For the Samkos bush frog we don’t know, but recent research has shown that biliverdin, far from being the useless waste product it was once supposed to be, in fact has specific roles in the body. One of these is as an antioxidant that is thought to ease the symptoms of asthma, while research has revealed that biliverdin has been shown to inhibit the ability of the HIV-1 virus to invade cells.

Can the Samkos bush frog help us as humans? No one knows. But it certainly needs our help. First, we need to make sure that it and its fragile habitat are conserved, something we can’t do until we know more about it and its ecology – a suitable M.Sc. study for one of Cambodia’s emerging natural science students to undertake, perhaps.

At the end of the workshop it emerged that none of our Indochinese amphibians are facing imminent extinction yet, and the direct intervention of ex situ breeding is not necessary. Let us try and keep it that way.