It takes people to save a species

Nav brings over eight years of experience to FFI on a wide range of public policy, strategic engagement and management issues. Prior to joining FFI, Nav served as the Assistant Director of Federal Affairs for the Wildlife Conservation Society where he was responsible for legislative and policy analysis, federal appropriations advocacy and outreach on global conservation policy initiatives at U.S. government agencies and multilateral institutions. With an LL.M from Cornell Law School, Nav brings to FFI a unique skill set and broad experience in the conservation and non-profit sectors. Nav serves as a key member of the FFI US team with his strong legal, public policy and management skills. In 2010, Nav completed a two-year leadership programme called the Emerging Wildlife Conservation Leaders. He currently serves on the executive board of Cornell Law School’s Alumni Association. Nav grew up in Bangalore, India with a love for nature and wildlife.

Most people think of sandy beaches, recreational diving and rum punches when they think of Antigua and Barbuda. I did too until I began working for Fauna & Flora International (FFI) and speaking to our Senior Conservation Biologist, Dr Jenny Daltry, who introduced me to the Antiguan racer.

An amazing snake species—one of the rarest in the world and endemic to this island nation – the Antiguan racer was down to 50 individuals when FFI was first asked by the government’s Forestry Unit to come to its aid in 1995.

FFI and our partners have documented the comeback of the Antiguan racer quite extensively. The invasive black rats, which came on European ships, infested many islands; Asian mongooses were introduced to keep the rat population in check but given that rats are largely nocturnal and the mongooses diurnal, the two mammals rarely met. Both the rats and mongooses were aggressive predators, attacking many endangered wildlife species – Antiguan racers, hawksbill turtles, West Indian whistling ducks – you name it.

But although these Caribbean islands are fragile, if the threats to species are tackled in the right way, the situation can improve quite rapidly – as has been the case with the Antiguan racer on the islands where FFI and our partners have been working. After 18 years of sustained conservation effort involving the identification and removal of key threats, habitat restoration, establishment and support to local constituencies such as the Environmental Awareness Group (EAG) of Antigua and Barbuda, and education of the next generation of people, this species is steadily increasing.

But the Antiguan racer is not the only species to have benefited from this work, and I would be remiss if I did not note the other major developments that have occurred – the restoration of whole island ecosystems, the other species that have benefited, the greatly increased environmental awareness of young Antiguans, the increased confidence and ability of Antiguans and Barbudans to tackle conservation problems – none of which existed prior to this project. All of this has been achieved thanks to the incredible collective efforts of the government, private sector, NGOs and local communities.

Although I had learned a great deal from Jenny about this work, it was difficult to grasp the intricacies from my desk in Washington DC.

So I leapt at the opportunity to join Kim Sams (Director of Conservation Programs at Disney Corporate Citizenship) and a film crew, to document the Antiguan Racer Conservation Project. This will be part of a series of short films featuring conservation projects funded by the Disney Worldwide Conservation Fund mainly being developed for Disney’s web audience. 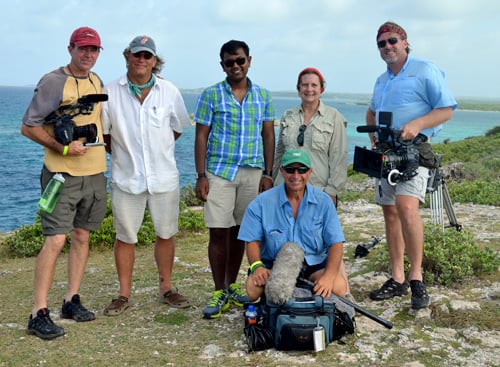 Disney has been a strategic supporter to FFI globally and an original sponsor of the project which has now mushroomed to supporting community-based conservation assistance and environmental education work across the Eastern Caribbean involving dozens of partner institutions.

This was my first trip to the Caribbean nation and my first visit to any of FFI’s project sites.

We flew into Antigua on 13 August, 2013, and after reorienting myself to left-hand driving (and ensuring our Disney colleagues and film crew were comfortable), I was ready for the adventure ahead.

We were welcomed by Jenny and Natalya Lawrence, EAG’s Project Coordinator who went over the itinerary for the days ahead. We also met with Matthew Morton, Matthias Goetz and Dr Nik Cole of Durrell Wildlife Conservation Trust, another longstanding partner of FFI.

The first day of filming involved getting across to Great Bird Island and documenting the capture, tagging, health inspections and reintroduction of the Antiguan racers. I met with EAG board member Ashton Williams, and Andrea Otto, a regular volunteer with the Antiguan Racer Conservation Project whom I followed as she searched out racers for their annual census and health check.

Andrea and Jenny found a couple of individuals in shaded, cooler parts of the island. After a thorough health inspection and verifying the tag on one of the individuals, they turned to tagging the other juvenile female they had found using an AVID™ microchip. 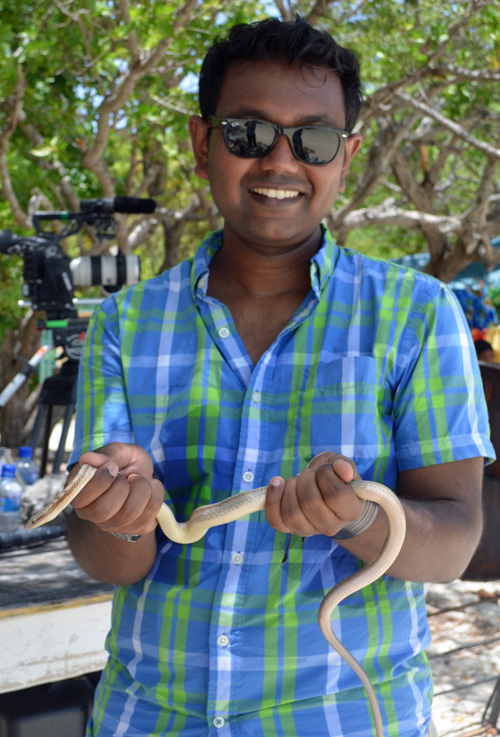 The highlight of my day and undoubtedly of the entire trip was when I got to hold one of the racers in my hands. It was an amazing feeling! I could feel its pulse beat throughout its 15 inch body. They are really calm beings. To know that this species could have gone extinct only a few years back and to appreciate that there is real hope for its survival now was an emotional moment.

While the film crew stayed back on Great Bird Island to capture more footage, Kim and I joined a floating classroom, where students get to learn about the great outdoors. 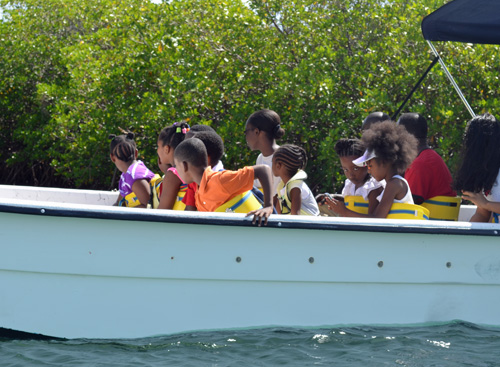 After a good night’s rest (and that rum punch I mentioned earlier), we woke up to another day of great weather: 82oF, clear skies and an occasional breeze. We met with a summer school class of 7-10 year old students and some of their parents, together with Adriel Thibou and his colleagues from the government’s Forestry Unit and local guides at Seaton’s Dock.

Natalya led most of the day’s activities. After a 25 minute boat ride, we stopped so the students could learn about mangroves and their role in maintaining healthy marine ecosystems. We saw upside-down jelly fish, sea cucumbers and several different fish species and nesting birds. We also saw a juvenile hawksbill turtle swimming in shallow water.

I shared the students’ curiosity and excitement and could appreciate the importance of incorporating environmental education into school curricula. EAG and the Antiguan Racer Conservation Project, with assistance from Disney, Curtis & Edith Munson Foundation and the U.S. Fish and Wildlife Service, are doing just that. I was given a weather-proofed guide to Antigua and Barbuda’s endemic and migratory species which all school students receive. 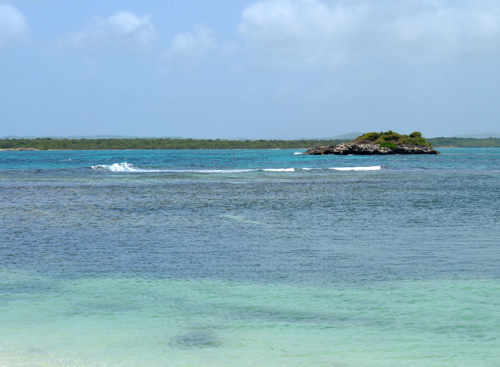 Before heading back to Great Bird Island, we passed neighboring islands Redhead, Rabbit, Jenny Island (the latter named by the Antiguan government in recognition of Jenny’s relentless passion and commitment to conservation) and others that have similarly been cleared of invasive species. Antiguan racers have been successfully reintroduced to three islands to date and their total population has exploded from 50 to around 1,000.

The students got to see the racers, observe the tag on them and learn about their habitat, threats and comeback story.

We headed back to the main island later that afternoon just as a storm was coming in. Our boat captain, Aldrick, promised a short but wet ride across, and sure enough we did catch some of it – the piercing rain (and occasional hail) and bumpy ride adding to our adventure. But thankfully everybody (including the expensive film gear) made it back safely.

On our final day of filming, we headed to downtown St. John’s on the main island where EAG has an office in the historic building that houses the Antigua and Barbuda Museum. We visited Dr Karron James-Scholl (the President of EAG) and project field officers Sean Peters and Tahambay Smith. Their passion and dedication to saving the racers was really contagious.

Through a sustained effort, this project is building a strong constituency of private citizenry and public institutions to ensure the future remains bright for the racers, turtles, seabirds and other imperiled species of Antigua and Barbuda.

As we wrapped up our brief time in Antigua, we gathered for dinner at Dennis’ restaurant on Frye’s Harbor where we had been staying. All key project partners and local community leaders joined us in celebrating the week’s accomplishments. While at dinner, Jenny briefed me about the enormous challenge that faces Redonda (the most remote of Antigua and Barbuda’s islands), where the invasive rats and feral goats are destroying the entire ecosystem and endemic Redondan animals and plants.

As I was processing this information and reflecting back on my experiences over the past few days, I felt that no challenge was insurmountable because Jenny’s vision and the will of Antigua and Barbuda’s people to save their natural heritage against the odds had already been put to the test once before.

I left Antigua with hope for the future and with gratitude to Disney Worldwide Conservation Fund and other supporters of this important work, to all project partners, and above all to the Antiguans I met who have committed themselves to saving the Antiguan racer and all that it symbolises for them.

Nav brings over eight years of experience to FFI on a wide range of public policy, strategic engagement and management issues. Prior to joining FFI, Nav served as the Assistant Director of Federal Affairs for the Wildlife Conservation Society where he was responsible for legislative and policy analysis, federal appropriations advocacy and outreach on global conservation policy initiatives at U.S. government agencies and multilateral institutions. With an LL.M from Cornell Law School, Nav brings to FFI a unique skill set and broad experience in the conservation and non-profit sectors. Nav serves as a key member of the FFI US team with his strong legal, public policy and management skills. In 2010, Nav completed a two-year leadership programme called the Emerging Wildlife Conservation Leaders. He currently serves on the executive board of Cornell Law School’s Alumni Association. Nav grew up in Bangalore, India with a love for nature and wildlife.