Is there hope for the Bengal florican?

It seems incredible that on such a huge planet as ours some species survive in extremely low numbers. During the last days of April I drove out of Phnom Penh to look for one of these species – the Bengal florican, Cambodia’s rarest bird. It was the last chance I would get to see them this dry season, because once the rains start and the water begins to inundate the seasonal flood plains where the floricans breed, the birds must move on.

There are an estimated 300 floricans remaining in Cambodia, and perhaps twice as many in Nepal and northern Indian, meaning that the global population could be fewer than 1,000 birds. Throughout their range their numbers are steadily diminishing, with habitat loss blamed as the primary factor. At the current rate of decline the Cambodian population is predicted to become extinct in less than a decade. 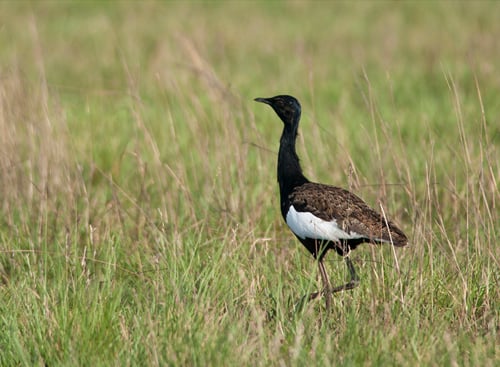 The bold markings of the male Bengal florican make him easy to spot on the open grassland habitat he prefers. Credit: Jeremy Holden/FFI.

Over two days we saw about 10 individuals – perhaps 1% of the global population. The male is a striking bird, the size of a turkey on long stilt legs. His inky black upper parts and bold white wings (which appear as a thick white bar when closed) make him easy to spot in the flat grasslands. This is for good reason. The floricans are visual creatures. Although they make a call it is a surprisingly quiet noise for such a big bird – a soft but far carrying k’sup that gives the bird its Khmer name.

The males guard their territories with a display flight, rising into the air like a huge white moth, before flopping back down. This display can be seen from a long way off and males constantly seem to be scanning the horizon for evidence of rivals. By contrast the female is far more discreet, so much so that actually finding one is difficult. Like many bird species, she is cryptically coloured to match the striations of the grass in which she nests. But the females also seem to be naturally scarcer.  We saw only one, squatting in the grass, perhaps hoping to fool us with her camouflage. 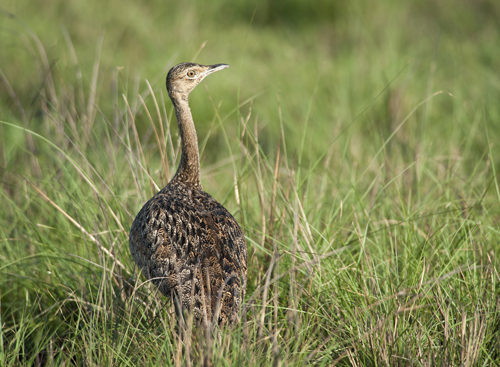 The female floricans appear to be much scarcer and are certainly harder to spot. Credit: Jeremy Holden/FFI.

Seeing a rare creature is always a thrill, but for me it is often accompanied by a sense of sadness, too. I realised while I was looking at the males displaying – driven by their instincts and completely unaware of how precarious their situation is – that if this population does decline to a single male, he would continue to display and scan the horizon for rivals or a cryptically-coloured mate. A futile activity, but he would have no choice.

A relative of the florican, the great bustard, has already suffered this fate in England. Once Britain’s biggest native bird, the last British population disappeared in the mid-19th century, a victim of trophy hunting. But in recent years a programme to reintroduce these birds to Sailsbury Plain in Wiltshire appears to be flourishing and the great bustard is back on the UK bird list.

Watching the antics of the floricans reminded me of another British bird, the red kite. Twenty years ago I made a similar pilgrimage to Aberystwyth to see the UK’s last population of these beautiful raptors. At that time there were perhaps 20 birds left. Two decades later and this same rarity can now commonly be seen above my home village in Bedfordshire – a result of a reintroduction initiative, changing agricultural practices, and protection.

It is unlikely that red kites will haunt the skies of London as they formerly did, but in the countryside they seem back to stay. The great bustards are probably more precarious, needing the type of open habitat that is now scarce in England, but at least on Sailsbury Plain they are back. 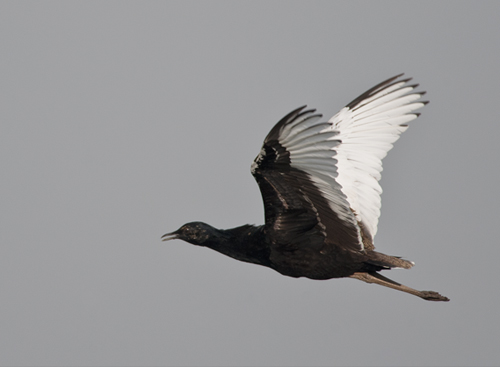 But what is the future of the florican? Changing agricultural practices are altering the way the landscape is used and in consequence destroying their habitat. Although conservation work by Wildlife Conservation Society and Cambodia’s Forestry Administration is underway, the pressures of development might prove too great.

What is clear, however, is that as long as there are individuals remaining there is still a chance. The great bustards and red kites have proved that. As conservationists we must be like that last imagined male florican – always scanning the horizon for hope.