Investing in livelihoods for the benefit of conservation

Iboih village on the island of Sabang (Aceh Province, Indonesia), is rich in marine and forest resources. The livelihoods of women and men who live in this village rely almost completely on those natural resources for food security and income generation.

Like many poor households in the developing world, access to capital and financial services is very limited and even when it is available, it is prohibitively expensive. These circumstances can make it very difficult to achieve conservation impact without addressing sustainable livelihood needs.

To address this challenge, Fauna & Flora International (FFI) has developed a US$60,000 revolving fund as a core component of its marine conservation work in this village.

The fund works by providing short-term, low-interest loans for small enterprises (such as local traders, fishers and farmers); as the borrowers repay their loans, the central fund is replenished, allowing new loans to be issued.

When FFI field coordinator Novriyanto (Novri) first visited Iboih to present the revolving fund idea, he was faced with opposition. The community had been promised much by development NGOs in the past but had received little in reality. To build trust, FFI field staff lived in the village for nine months and showed their commitment through daily informal meetings that sometimes lasted until 2 am.

12 months after the initiative was presented, the community representatives were sufficiently convinced to give it a try.

A steering committee was established with representatives from important stakeholders including village administration, women’s groups, and agricultural, livestock, fishing and tourism groups. This gave partial management of the fund to community representatives.

The first task of the committee was to develop standard operating procedures that would ensure the criteria for evaluating loan applications would meet the needs of the community, including vulnerable members of society such as poorer households and those headed by women.

Amongst other loan application criteria was the condition that the proposed activity should (at the very least) cause no harm to the environment.

Interest rates were between 1–1.5% with an exception for widows who were exempt from paying any interest.

Unique repayment schedules were agreed for every borrower depending on the nature of the business. Traders tended to repay the full amount within a very short time frame (sometimes within a week or two) because of quick sales turnaround. Fishers often took out loans over a 6 month timeframe, but made incremental payments every week or month, while farmers – whose repayment depended on harvest or sale of stock – commonly repaid loans in full over a six month to two year timeframe. 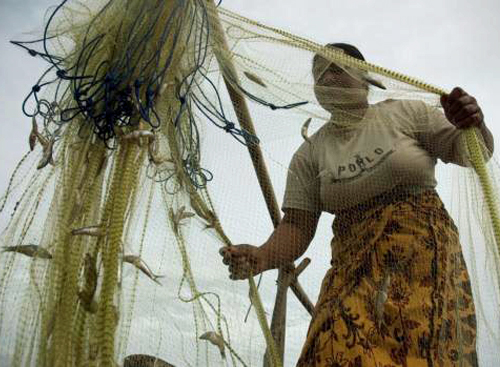 To date, 117 individuals or groups have borrowed from the fund, and 18 months after FFI first started discussing the idea with reluctant women and men from Iboih village, full ownership of the revolving fund was transferred to the community who established the Iboih Makmur Cooperative – a significant milestone for the fund that highlights how community perspectives have changed from overwhelmingly pessimistic to overwhelmingly optimistic.

By establishing a relationship between FFI staff and the women and men of the village, the fund has created positive conditions that have supported more traditional conservation work such as strengthening community-based marine governance, and since the fund began the number of illegal fishing incidents has decreased dramatically.

But the story doesn’t end there. In its third year, we reduced the scale of our role in supporting the fund’s operations, putting the responsibility back into local hands. We found, however, that the fund started to unravel: data was being entered incorrectly, the computer broke and was not being used, and loans were not being repaid.

So Novri returned to Iboih and he now plays an oversight role, checking in with the cooperative every month or so.

Our experience in Iboih sheds some light on the requirements when structuring a large-scale perpetuity fund:

Although all of these considerations have cost implications, they are critical for ensuring that funds are effectively deployed for conservation impact and financial sustainability.

The Iboih fund supported very small-scale enterprises. As a next step, FFI and partners are investigating whether there are appropriate activities or businesses that a larger perpetuity fund could invest in that could deliver benefits for conservation.

This work is part of FFI’s burgeoning work on venture philanthropy and impact investment which is working to better understand and support enterprises that impact conservation to move towards and beyond financial sustainability.