Rumour and confusion – investigating the death of a tiger cub

Imogen Clowes is an artist who uses her skills to illustrate news and current affairs articles. Imogen is particularly interested in investigative reportage illustration, and a large part of her work is informed by her travels. She recently journeyed to Asia where she visited Kerinci Seblat National Park in Sumatra, where Fauna & Flora International is working with partners to protect and conserve Critically Endangered Sumatran tigers. Imogen studied Illustration at Bristol UWE.

Sumatran tigers are solitary animals and ideally need 30 to 40 square miles of jungle to themselves, so what happens when they don’t have this kind of space? On a recent trip to Kerinci Seblat National Park, I found out for myself.

I was travelling with a small team from Fauna & Flora International (FFI), and arrived in the village of Durian Rambun in eastern Sumatra to find it swirling with persistent rumors that a tiger had been shot.

A few days before we turned up, a man had apparently been attacked while cutting trees beyond the perimeter of his village, about 8 km away. Although he had managed to escape up a tree with a fairly minor scratch on his foot, his injury had quickly become a source of discussion and confusion.

The tiger was said to be missing a paw, and this disability was believed to be the reason it had come so close to the village, since it could not hunt effectively and was hungry. It had taken a risk and approached in search of food.

At 8pm the village head received a call that there was a dead tiger on the border of his village. No further information was offered – nothing about how it had died or at whose hand. In fact, they were not entirely clear if it was dead or seriously injured. The men of the village tripped over themselves volunteering to go and retrieve the body. When the situation had calmed a little, a group of about thirty men, plus myself and the FFI team, left the village.

The track was undulating and slippery due to the heavy morning rain. When we reached our destination 4 km from the village, a team of about 15 people began to cut their way into the jungle towards the area where the tiger was believed to be.

An hour later some of the trail cutters returned from the darkness of the forest. They waved their arms around and tried to explain something about the tiger to me. For a while I understood only that it was small. Then, after a flurry of gestures, a man found the word for which he was searching: “Baby.”

A few minutes later another group appeared. In the dimness I could make out the shadow of a pole propped on the shoulders of two young men. As they neared, the outline of a small body, limp and lifeless, revealed itself to the waiting crowd. With each of the boys’ steps, the otherwise motionless cat twitched slightly. 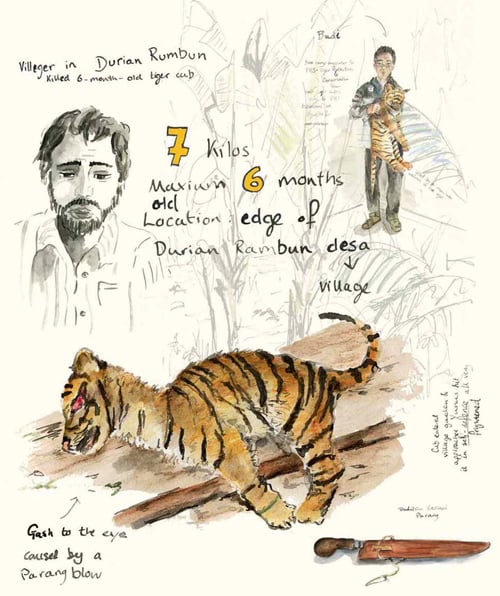 The tiger cub was thought to be no more than 6 months old. Credit: Imogen Clowes.

They lay the tiger down on the muddy ground in the beam of the car headlights and we gathered around the little body. There was a deep gash on its eye, and the headlights illuminated white and red flecks of muscle and skin. To my untrained eye, it looked like the damage a knife would do.

That night, the young tiger’s body was taken to Bangko – a town three hour’s drive away – for an autopsy by the KSDA Nature Conservation Unit.

Getting to the bottom of things

The next morning the village head, the FFI team, and a handful of villagers met with the man who had killed the cub, with a view to of filtering out the frenzied speculation and finding out what had actually happened.

But the story was more complex than anyone had first thought. The cub had been seen earlier in the day near the river, close to where its body was later recovered. The man was returning home from the river with his young child – he had tried to scare the cub away by making loud noises but it had not retreated, which suggests that it had already been injured by this point.

Later the same day, the tiger cub entered the Durian Rambun village garden while people were cutting rubber and approached a man. Panicking, he swung his knife at the cub, delivering a deep gash to its eye.

Yet, the wound did not look serious enough to kill the tiger – had it already been fatally injured in an earlier encounter? This is something that the Kerinci Seblat National Park Tiger Protection and Conservation Team is now trying to uncover together with the KSDA Nature Conservation Unit.

This may have been the cub of the tiger that attacked the villager a few days previously whilst cutting trees. Tiger cubs of this age are rarely seen on their own, and if the mother had died from her injuries this would explain why the cub was wandering into the village alone.

What this story highlights is the reality of deforestation: tigers are being enclosed like domestic cats, leading to tragic encounters like the one I witnessed.

Despite the higher profile that this issue has received in recent years (thanks to organisations like FFI), the threat of deforestation is still critical and the forest continues to be swallowed up.

Global agribusiness and the pulp and paper industry bear the principle responsibility for the destruction of the forest. Their plantations supply Britain and the world with toilet paper, biofuels and vegetable oil – the latter of which is used to make goods such as chocolate.

But who thinks of the vanishing Sumatran rainforest each time they treat themselves to a chocolate bar?

Imogen Clowes is an artist who uses her skills to illustrate news and current affairs articles. Imogen is particularly interested in investigative reportage illustration, and a large part of her work is informed by her travels. She recently journeyed to Asia where she visited Kerinci Seblat National Park in Sumatra, where Fauna & Flora International is working with partners to protect and conserve Critically Endangered Sumatran tigers. Imogen studied Illustration at Bristol UWE.