Into the valley of the shadow of death: disaster planning for the remarkable Chilean plum yew tree

The great paradox of my job is that we journey to some of the most beautiful places on Earth because they are at risk of destruction. In our quest to aid the conservation of some of the world’s most threatened conifer species, all too often we visit the last remaining fragments of their habitat.

San Fabian de Alico, an Andean valley in central Chile, is home to an important population of Chilean plum yew (Prumnopitys andina), and we travelled here to collect some cones. This is a peculiar conifer, a member of the Podocarp family, which is largely confined to the southern hemisphere.

In natural habitats, the Chilean plum yew has its niche, usually growing as a secondary component of forests and never dominating the scene. In size and stature it resembles the European yew with which it shares the same dark green colour of its needles. The Chilean plum yew differs though in its female cones which are in fact fleshy, and it’s this character from which the local common name is derived, ‘uva de cordillera’ – meaning grape of the mountains. 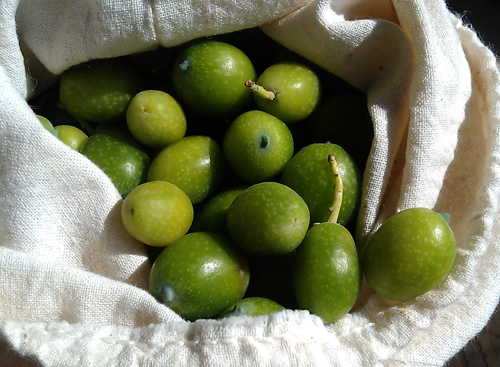 In San Fabian, the valley bottom is peppered with small-scale farms and dwellings among a matrix of natural vegetation, from riparian woodland to temperate southern beech forest.

On our drive up the valley we come to a stop where the road passes under a large cliff face. This is the closest we have been to the glacier-blue river, and two southern beeches tower over us.

The cliff above us is dripping with vegetation. Climbing hydrangeas make thick mats on the rock walls, the occasional fuchsia has found a foothold, nooks and crannies are invariably filled with puyas and fascicularias (plants native to the Andes), and on even the smallest ledges saxifrages have made their home among mosses and lichens, enjoying the dappled shade of huge ferns.

This is quite easily the most beautiful place I’ve ever been, and looking upriver we see it goes on for miles and miles.

Only a few hundred meters upriver, we again leap out of the car onto an extraordinary formation of huge rocks. It is here, on the large rock in the centre of the river, where a brave soul has leapt the narrow channel of fast-flowing water to paint onto the rock-face across from us, “No al punilla” – “No dam.”

From 2015, everything we are looking at upriver from this point will be underwater, to approximately one third of the way up the valley sides.

Chile has chosen to focus its energy policy on such destructive hydro-electric schemes, apparently paying only lip-service to the extraordinary potential this exceptional country has for geo-thermal energy, and wave and wind energy along its coastline of over 4,000 km.

San Fabian is neither the first valley nor the last to be sacrificed to this particular cause. It will take with it the homes and livelihoods of an entire community, an area of outstanding natural beauty, and a wealth of biodiversity which includes the population of Chilean plum yew we are here to sample before it is too late. 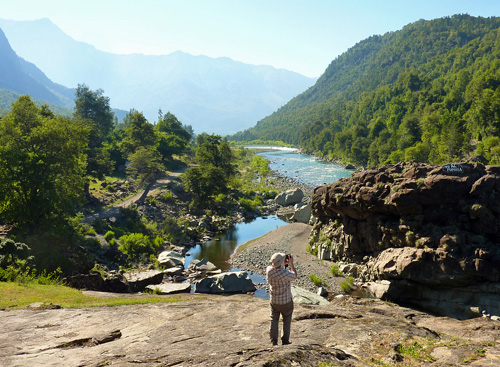 The site where the dam will be built – everything upriver from this point will be flooded. Credit: Tom Christian.

Much is still to be learned about this species and what makes it tick, especially about its cultivation. The iCONic project aims to help save some of the world’s most remarkable trees from extinction by creating ex-situ conservation plantings in Scotland, in partnership with the International Conifer Conservation Programme. The seeds we collected in San Fabian will be grown for a research programme looking into mycorrhizal (root fungi) associations at the Botanics in Edinburgh.

If ever wave and wind energy production should triumph over the damming of Andean valleys in Chile, leading to the future draining of San Fabian (as is now being done with some older dams in the north-west US), then the plants we will have established in ex-situ collections across Scotland can be used to help restore this valley. 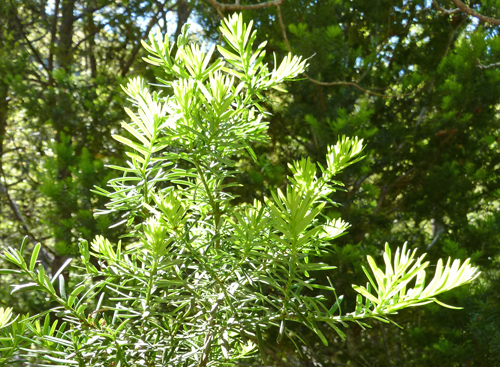 Sadly though, there isn’t much that we can do for the people of San Fabian. We heard from a lady who has lived in the valley nearly all her life, about how she and her husband are among the last handful of residents refusing to leave. Together with a few stoic neighbours they are digging their heels in as far as they can.

It is a tale that could be from any part of the world – a small band of local residents facing up to an energy company with the backing of a short-sighted government policy.

Stories have made their way back from people who have already left, strengthening the resolve of those left behind. Residents had been promised accommodation, employment, space, but an urban apartment and new job do not fully compensate for a life lived off the land in one of the most beautiful places on earth!

It all has a ring of Tolkien to it. The trees standing sentinel over the communities, knowing they will be next.

Want to keep reading? Then why not take a look at earlier instalments in Fauna & Flora International’s remarkable trees blog series.