Ngwe Lwin is Fauna & Flora International (FFI) Myanmar Programme's Terrestrial Conservation Coordinator. Before this role, he worked as a nature guide and conservation field coordinator until he was promoted to Programme Manager for FFI's Myanmar Conservation and Development Programme. Ngwe Lwin's interest in birdwatching began in 2004 and has conducted several bird surveys in Kachin state, Rakhine state and Chin state.

Indawgyi Lake, located in northern Myanmar is one of the biggest inland lakes in Southeast Asia and the largest in Myanmar. Every year migratory birds from as far as Siberia follow the East Asian-Australasian flyway and flock to Indawgyi Lake to rest and feed during the winter season.

They start arriving in November and stay until the end of March. Bird surveys over recent years regularly record more than 20,000 wintering water birds.

No wonder that the Indawgyi Lake has been recognised as an important bird area and nominated for designation as a globally important wetland under the international Ramsar convention. 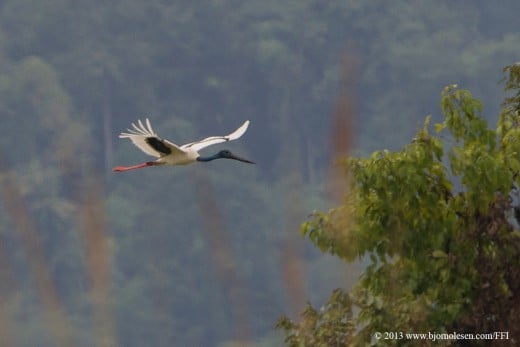 At the Indawgyi wetland, birds can be observed in a large variety of habitats: the open lake, floating vegetation mats along the lakes edge, seasonally flooded grasslands and the surrounding paddy fields.

The ornate Shwemyintzu Pagoda perched over the lake is an ideal platform for watching black and brown-headed gulls following the pilgrim boats while hundreds of tufted ducks are skimming the lake surface for food. 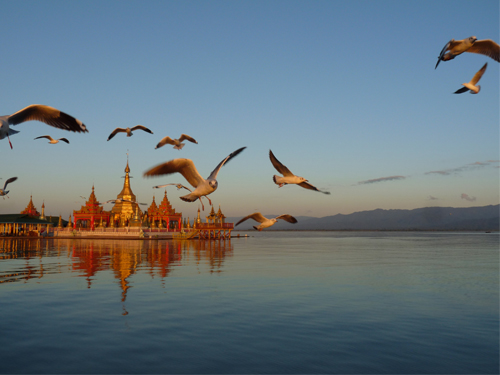 The southern lake edge features not only large aggregations of ducks but also of grey-lagged and bar-headed geese.

The western (between the Pagoda and Nyaungbin village) and the north-western lake edge (between Nyaungbin and the Indaw Chaung outlet river) is very rewarding featuring large floating vegetation mats with the greatest variety of water birds, which can be explored by kayak or motorised long boat.

Two crane species can be seen – the sarus crane which is resident, and the common crane, a winter visitor – and can be watched as they feed in the grasslands or paddy fields, and fly to their roosting sites.

Five species of storks, Asian openbill, black stork, woolly-necked stork, black-necked stork and lesser adjutant are commonly seen feeding in the grasslands, roosting on the few trees in the river plain or soaring above. 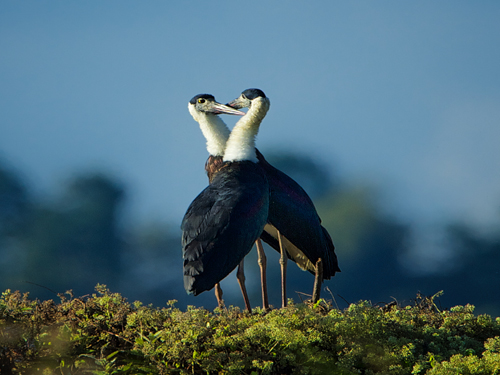 During the winter, white-rumped vulture and slender-billed vulture soar above the grassland looking for cattle carcasses. If you are lucky enough, you can encounter vultures feeding on a cow or water buffalo.

Besides storks, cranes, ducks and geese, you can also look out for birds of prey (such as osprey, eastern marsh harrier, pied harrier, Brahminy kite, Pallas’s fish-eagle, greater spotted eagle) along the Indaw chaung as they soar above the water and grasslands.

Head off to the surrounding forested hills to explore them.

How to get there

Option 1: Yangon to Myitkyina by flight; Myitkyina to Hopin by train; Hopin to Lonton village(Indawgyi lake) by car/ public bus.

Option 2: Yangon to Mandalay by flight/car/train; Mandaly to Hopin by train; Hopin to Lonton village (Indawgyi lake) by car or by public bus.

There are several local restaurants in Lonton village. Noodle soup and coffee/tea for breakfast, and rice and Burmese / Shan curries for lunch and dinner.

For the migratory water bird season the best time is December to March, but bird watching is good all year round with plenty of resident birds. Spott-billed Pelicans appear on the lake between March and May, and many birds can be seen breeding.

Best to avoid the heavy monsoon rains from July to August.

Bird watching is best done by kayak which can be rented from the community-based eco-tourism group in Lonton village.

You can reach Shwemyintzu Pagoda and Nyaungbin village by rented motorbike or bicycle.

To head for Indaw Chaung you need to rent a motorized long boat, also available in Lonton village.

Ngwe Lwin is Fauna & Flora International (FFI) Myanmar Programme's Terrestrial Conservation Coordinator. Before this role, he worked as a nature guide and conservation field coordinator until he was promoted to Programme Manager for FFI's Myanmar Conservation and Development Programme. Ngwe Lwin's interest in birdwatching began in 2004 and has conducted several bird surveys in Kachin state, Rakhine state and Chin state.