In the wake of Wallace – part two – birds of paradise

When following in the wake of Alfred Russel Wallace, one has to remember that his focus was on collecting those animals that he could sell in order to both finance his travels, and provide a nest-egg for when he eventually returned to England. Thus, beetles, butterflies and birds were on the top of his list because they are wonderfully varied and beautiful, keep their colours when dead, and were popular collectibles of the time. Among the birds, the birds of paradise were top of his list and he made great efforts to collect them. Likewise, one can’t be in the wake of Wallace without trying to ‘collect’ them too.

Wallace was probably the first European to see birds of paradise in their natural habitats and certainly the first to describe their behaviour. He was also the first to bring two live birds back to the London Zoo, feeding them on fruit and the cockroaches he found on the ships and in the places the ship called at on the way. Perhaps unwittingly he contributed to the massive interest in their plumes in the Victorian millinery trade, but 40 years later he was supportive of the moves to outlaw the Victorian fashion of using the plumes in millinery. Indeed, in 1908, he wrote to Lord Avebury supporting the bill he was putting before Parliament: “To stop the import is the only way – short of the still more drastic method of heavily fining everyone who wears feathers in public, with imprisonment for a second offense. But we are not ripe for that yet.” 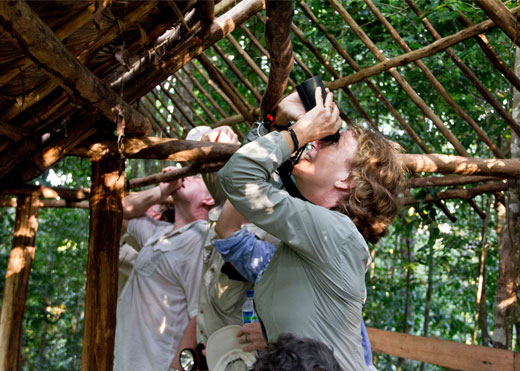 The species he made the most effort to collect was the Red bird of paradise and one place to see this relatively easily is just outside the village of Sawinggrai, on the south coast of Waigeo Island. We set off along a well-worn and somewhat slippery path at about 5am and soon reached the forest, using torches and mobile phones to light our way. After about 15 minutes the path steepened and we climbed up to a cleverly built, covered hide. Well, partially covered. A gap had been left in the roof through which we could just discern the top of a large, leafless tree against the still-dark sky. We sat quietly on the benches and the forest awoke.

The squeaks, squeals, tweets, pipes, croaks and booms of a myriad frogs, toads, cicadas and birds grew louder until we heard the repetitive, rasping squawks from just above us; our guide, Yesaya, told us that this was our quarry. The sky was by now quite light but the tree appeared empty. 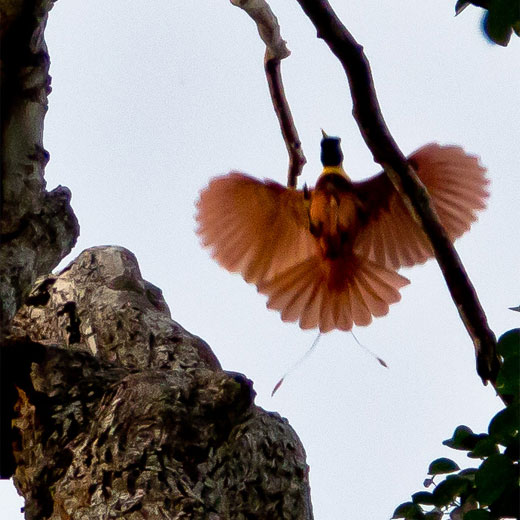 But suddenly there it was. It was larger than I had remembered from the few times I have seen it in zoos, and a predominantly soft ochre colour. My eye was caught by the two, long, wiry tail feathers with a small banner at their tip which bounced with every move the bird made. The head was mostly metallic green but this was offset by a bright yellow collar and a black mask behind its pale green bill.

It hopped and flew between the bare branches, flapping its wings slowly and deliberately to show off its mass of soft ‘underarm’ feathers, advertising its beauty to females which we could not see but were presumably in the surrounding trees making their assessment of his potential as a mate. The risen sun shone sideways against the birds and their perches and it was all rather beautiful to behold. Other males appeared but after the glory of the first they were rather a disappointment. One had only a single long tail feather and even that was bent and lacked the banner, and the other had none. 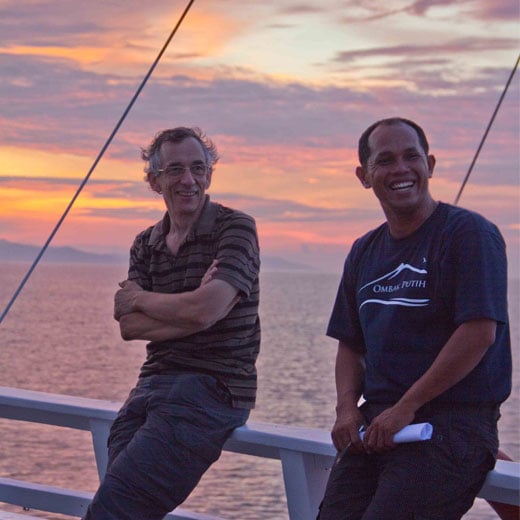 Sawinggrai receives about 700 visitors each year and is getting well known. But we also went to Yenbeser, a significant village for Wallace aficionados because it was the village from which he collected 24 Red birds of paradise back in 1860 and his ‘compact’ house where he based himself is illustrated in The Malay Archipelago. I met there with the Village Head, Albert Makusi, and also Karel Dimara who owns a small guest house on the coast against the forest from which he can take visitors to see the birds.

We discussed the possibility of  constructing a replica of the Wallace house (the dimensions and style of which are described well in the book) so that they could attract more visitors, have some stay over to see the birds in the forests which Wallace himself explored, and thus increase their benefits from the area’s growing ecotourism activities. We are now following up on that.

Read part one: the legacy of an original conservation champion.