In search of the Siamese crocodile

Gordon Homer is a Community Development Advisor, who is supporting the development objectives across all of FFI's projects in Cambodia. Having worked in community development in Africa, India and Australia, Gordon is a welcome addition to the FFI Cambodia team. With a Masters in Community Development/Emergency Management and a nearly completed Masters in Environmental Management, Gordon has been able to merge his two passions - namely development and conservation. Having worked as a game ranger in Africa for many years, his passion for wildlife is evident. As a South African (and adopted Australian), if you own a rugby ball Gordon will be your friend.

The Fauna & Flora International (FFI) Cambodian Crocodile Conservation Programme (CCCP) took me on a remarkable adventure in March 2015. I joined a small expedition to survey a stretch of a very remote river in the Cardamom Mountains in south-west Cambodia to determine the presence of the Critically Endangered Siamese crocodile. Our journey began with a seven hour drive from Phnom Penh to a remote army station in the Cardamon Mountains, from where we then hired ‘Motodops’ (motorbike drivers) to porter us and our supplies into the jungle. Our adventure had begun!

The tracks beckoning us into the jungle were rough to say the least, with our group at times walking up steep slopes and pushing and bouncing the motorbikes over difficult tracks. For the first few kilometres there were signs of human activity, but as we ventured further into the jungle these diminished while the sounds of nature reverberated through the jungle as if to announce their authority.

After four gruelling hours we finally arrived at our destination, a serene spot on the shores of the river. FFI’s Cambodia Flagship Species Manager, Dr Jackson Frachette, and I set up camp overlooking the river in the hope of viewing wildlife – particularly crocodiles – in the early mornings and during the nights. 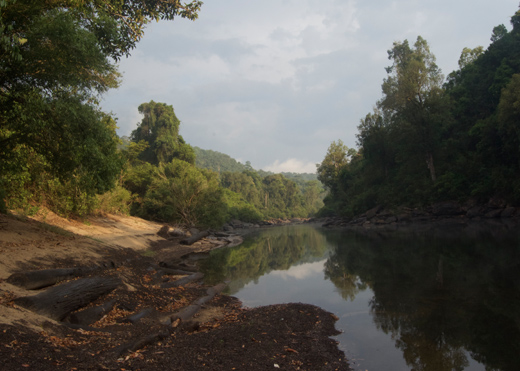 The view from the campsite. Credit: Gordon Homer/FFI.

Having had a long and exhausting day, we decided to capitulate to the oppressive heat and humidity of the jungle and retire to the luxury of our hammocks for a well-earned sleep…or so we thought.

After what seemed like a micro-second, the local frog fraternity embarked on their evening concert which no doubt had joyous meaning in their lives but which, to tired surveyors, was simply a cacophony of noises designed to deprive other living creatures of their right to rest! I must confess that we did subsequently come to enjoy the frog concerts on later nights though, as we realised the privilege of the experience.

The following morning, we set out to search for signs of Siamese crocodiles, with Jackson and Hor Leng in their new inflatable kayak while Sorn Piseth and I walked along the banks. 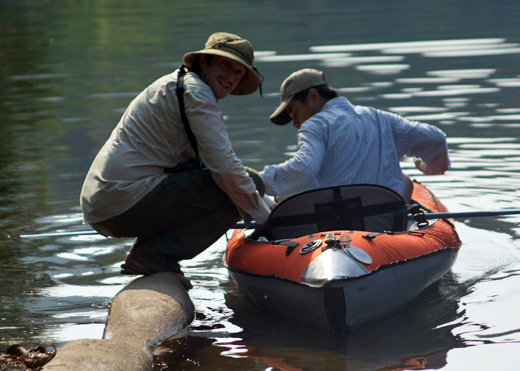 After 20 minutes, the jungle came alive. Pileated gibbons started calling from everywhere (or so it seemed) – perhaps trying to extract a modicum of satisfaction by disturbing the now silent frogs. During our search of the bank we came across fresh otter and leopard tracks as well baby crocodile dung. 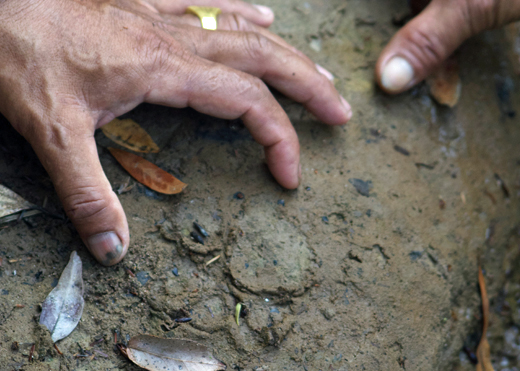 A multitude of birds were calling with signs of life and activity everywhere. Then, unfortunately, we made a gruesome discovery. In a small cove we found the remains of an adult crocodile, which may have died as a result of swallowing a fishing net. It was sad to see that no matter how remote you think you are, man’s insatiable greed for natural resources has still managed to penetrate this pristine environment.

With only an estimated 250 Siamese crocodiles left in the wild, every mature breeding adult is critical for the survival of the species. This discovery was a painful reminder of the delicate balance between survival and extinction.

An intense thunderstorm caused me to regret securing my hammock between two trees in the open and not having taken more care when erecting my tarpaulin, which now formed a mini water reservoir. When the rain stopped, Jackson and I paddled out in the kayak to once again search for the elusive crocodiles.

After a few minutes, the occupants of trees came alive as if to welcome us into their world. First we spotted pig-tailed macaques followed by silver langurs and long-tailed macaques, then the ubiquitous gibbons calling from all directions. It was a surreal experience that left me feeling absolutely invigorated after my restless night under the tearful stars. To be listening to and watching all this activity was just amazing. 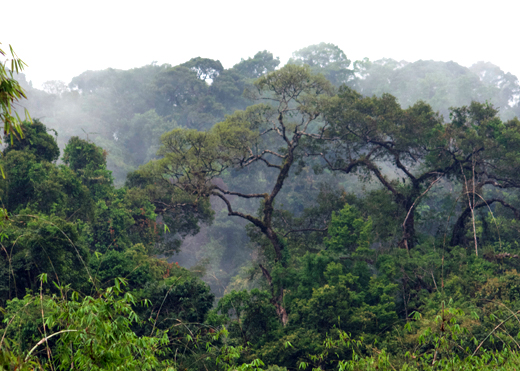 As darkness descended we turned on our spotlights and gently paddled along the open stretch of water. Due to the afternoon rains, steam was rising off the water making it hard to see through the glare of the torch on the mist, and creating an incredibly eerie atmosphere. The industrious activity of the forest’s inhabitants had ended and only silence and darkness remained to stimulate my over-active imagination.

The next two days were spent traversing our chosen section of this pristinely beautiful river searching for signs of our scaly reptile friends. In total we found four separate piles of crocodile dung and removed samples of each to determine their diet to better understand what they are eating. The crocodile population is most certainly small, yet the abundance of fish in the river could no doubt accommodate a much larger population. The good news was the finding of baby crocodile dung which shows that breeding is taking place.

Our final day came with the disappointment of not having seen any crocodiles, but what an amazing experience! We left camp early to make the long trip back to Phnom Pehn. On route we heard the beautiful chorus of the gibbons, which seemed close to the road, apparently bidding us farewell. With one last roll of the dice, Jackson and I hopped off our transport and sneaked into the jungle to try and see these beautiful apes. After a relatively short walk we saw a female gibbon swinging and jumping between trees. What a wonderful gift of nature and an amazing exit from the forest! 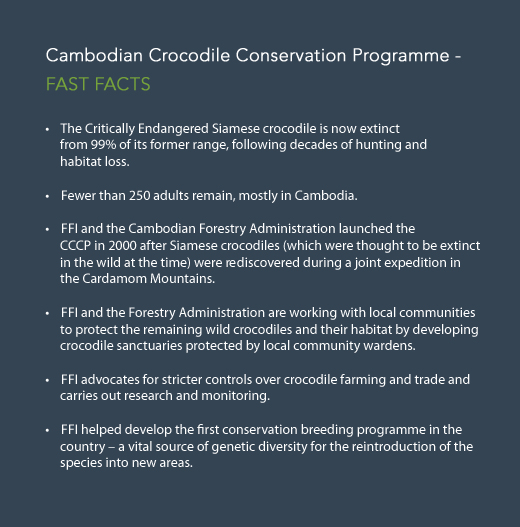 To learn more about the CCCP, take a closer look…

Gordon Homer is a Community Development Advisor, who is supporting the development objectives across all of FFI's projects in Cambodia. Having worked in community development in Africa, India and Australia, Gordon is a welcome addition to the FFI Cambodia team. With a Masters in Community Development/Emergency Management and a nearly completed Masters in Environmental Management, Gordon has been able to merge his two passions - namely development and conservation. Having worked as a game ranger in Africa for many years, his passion for wildlife is evident. As a South African (and adopted Australian), if you own a rugby ball Gordon will be your friend.