On 8th December a host of celebrities attended ICAP’s London office to take part in their annual charity day, which takes place on the same day in major cities around the world.

Along with celebrity guests Daniel Craig and Imelda Staunton, FFI’s celebrity ambassadors Mike Dilger, Alison Steadman, Ellie Harrison and Michael Elwyn were shown how to work the phones and broker a deal. All proceeds from the day were then divided amongst pre-selected charities. 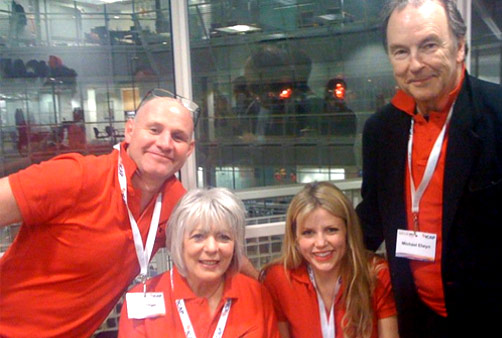 At the close of trading ICAP had raised £12.1 million worldwide on its 18th Annual Charity Day.

“I wasn’t sure what to expect, all I knew was that I was going to spend a day completely removed from my natural habitat. I had a great day mixing with the celebrities and meeting the traders and I’m absolutely thrilled that Fauna & Flora International will now have this very generous donation to invest in its work in Sumatra” said BBC One Show presenter Mike Dilger.

FFI will use the ICAP contribution to establish a community carbon pool in western Sumatra, Indonesia. This will help forest-edge communities access the carbon trade by pooling multiple community-managed forest areas into a larger, viable unit for the purpose of carbon credit transactions and accounting.

This in turn will reduce forest loss and protect habitat for the endangered Sumatran tiger and other endangered species.

“It’s fantastic to see such a successful business putting its back into supporting conservation – ICAP’s generosity will make a big difference on the ground in Indonesia but it also makes a statement here in the UK about how seriously the city takes the environment” said Dr Chris Greenwood, FFI’s Director of Fundraising and Communications.