Just over 20 years ago I was on Nusa Penida, the ‘black magic’ island just off the south-eastern coast of Bali. I had heard of a cave called Giri Putri near the small village of Karangsari and sought it out to explore as part of a book project. I found a young villager with a torch and, in the blazing sun, he led me up the hill above the village through short, dry and spiny vegetation and then pointed to a boulder with a dark shadow beneath it.

On closer inspection the shadow turned out to be a hole. This was not exactly what I had expected, but my guide persuaded me that this was the cave entrance. To prove it, he ducked into it and disappeared. Emboldened, I followed and found myself in a small chamber which forced me to crouch as I moved towards the torch light. After 10 metres the roof soared upwards.

The guide and I walked around the cave listening to the shrieking of bats and looking on the floor and the walls for cave animals. It was clear we were by no means the first people to enter the cave because there were signs of the many visits made by Balinese Hindu pilgrims who visited the cave to worship at the various temples within this sacred cave.

But it was not the temples that really caught my eye. Rather, it was the dozens of crabs that scuttled out of our way. They ran across the muddy cave floor and plonked into vertical holes eroded by the constant dripping of water from the roof.

I thought the crabs looked unusual so I collected a few and sent them to the leading crab taxonomist in Asia, Professor Peter Ng at the National University of Singapore. He confirmed they were a new species and we wrote the paper together which described the new species. Of particular note was that the crabs had relatively long legs, suggesting they have evolved in darkness – a common morphological adaptation to life in caves. 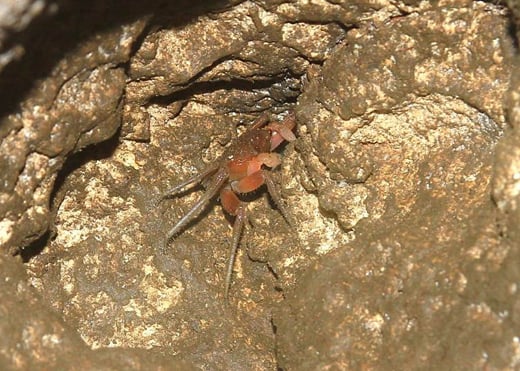 I have been back to the cave every few years ever since and I have noticed two sets of changes. The first is that the entrance is now surrounded by a roofed shelter and guard house – although the entrance hole is as small as ever. Inside the cave there are now concrete walkways, concrete benches, a ventilation system, permanent lighting and a smell of incense. The number of visitors has increased dramatically. Pilgrims can visit the cave around the clock.

The second change is that the bats are now less numerous and the crab population has plummeted. Indeed on my last visit I saw none.

Of course, it is possible that the crabs live outside the cave and can be found in other parts of the island. To check this, a pamphlet was distributed by a local conservation NGO, Friends of National Parks Foundation (FNPF) across all of Nusa Penida’s villages in 2012. It asked villagers to contact FNPF to report any other sightings of the crabs – but there were no reports. It is thus reasonable to assume that the Giri Putri cave is the only place where it lives.

As a consequence of my concern, Fauna & Flora International has just received a Rapid Action Grant from SOS – Save Our Species, an initiative managed by IUCN. This is allowing us to engage with FNPF, to meet formally with the temple committee and the local community, to produce and erect a sign board about these remarkably restricted animals, and to produce a collaborative management plan to try to bring the crabs back from the brink.

There should be no conflict with the religious practices. As the Balinese Brahmin priest, Professor Ida Pedanda Gde Nyoman Jelantik Oka, has written on this issue: “One of the principles of Hindu belief (Buddhist Mahayana) is to nurture and conserve life, including fauna and flora, and other creatures be they seen or unseen. The basis for this is Sarwa Satwah, Sarwa Bhutah, Sarwa Pranidah, and Sukhino Bhawantu Swaha. All Hindus, young, old, from birth to death, should always attempt to carry out these principles.” 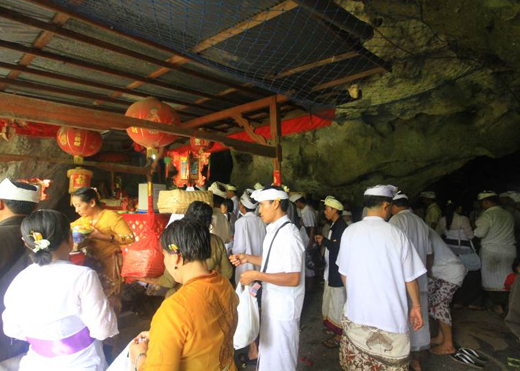 So how can you help? ARKive has just launched a competition to find the world’s favourite underappreciated species and this Giri Putri cave crab is one of the candidates.

It needs your support, so please do take the time to vote for it. If you do so we hope that the extra attention will assist our efforts to support a local student who would be able to understand the behaviour and ecology of the crabs, to monitor its population, and to help refine the management plan.