Heart of Darkness: Venturing into the Tanintharyi

“I am concerned for your and Jakob’s safety,” said Zin from Myanmar’s Forest Department. “We are not sure about the situation with the KNU. We haven’t even been that far up the Tanintharyi ourselves – no outsiders have since independence.”

The KNU he referred to is the Karen National Union, a rebel group representing independence for a Karen state in southern Myanmar. I considered Zin’s fears as more official concern than worry over a legitimate danger – none of the various rebel groups in Myanmar are known for kidnapping foreigners. But they were also based on an ignorance of what the situation in this area actually was. The independence he referred to was Myanmar’s independence from British rule, and our little expedition was the first of its kind to venture into this part of the country for over sixty years. 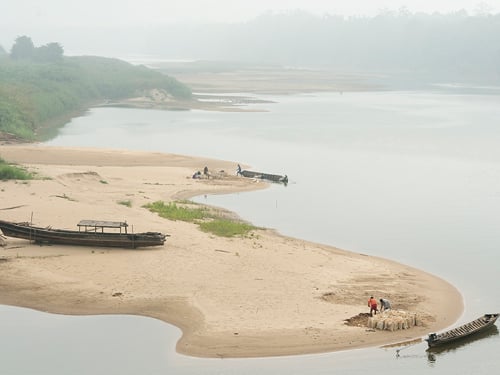 As Myanmar emerges from its dark past and establishes itself as a modern nation, the government has decided that a proper protected area network must be created. Our visit to the remote forested areas of Tanintharyi was part of a Fauna & Flora International (FFI) initiative to help with this process by assessing the biological value of the area and determining how best to protect it. Our group would split into two teams: a forest survey team to assess the biodiversity, and a village team to interview local communities and map forest use. 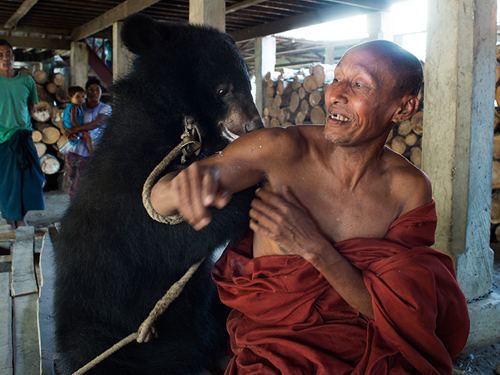 Eight hours on an open boat from Myiek on the west coast brought us to Tanintharyi township. Another four hours and we arrive at the small riverside settlement of Tagu. As with many forest-edge communities there is an abundance of wild pets. We discover various forlorn primates chained or caged: pig-tailed macaques, a white-handed gibbon, and a huge stump-tailed macaque whose fur is matted and greasy with its own excrement. A pitiful sight, but a useful one for Jakob from the German Primate Centre …who is here to collect primate faeces as part of a PhD study.

In a local monastery we find both sun and Asian black bear chained up beneath the monks sleeping quarters. In a paddock outside a muddy sambar deer is tethered, its antlers sawn down to flat stumps after it seriously gored one of the monks. The same monk shows us his scars; then gives us a show with the black bear, which gets boisterous. He treats it more like a naughty child than a potentially dangerous wild animal, and I wonder how long it will be before the sambar incident is repeated. 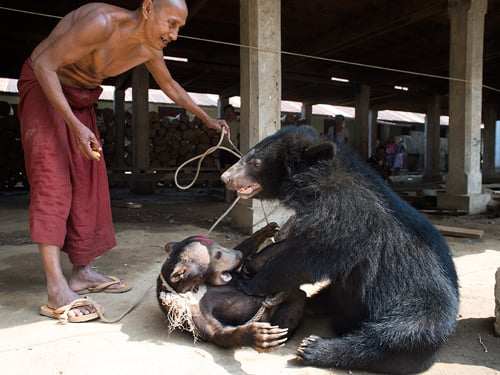 A monk with bears in the Tanintharyi. Credit: Jeremy Holden/FFI

After another day’s travel by boat in the baking sun we spend the night on the riverbank, sleeping in a hut on a bed of areca nuts. In the morning we leave for the forest after gathering a guide and twenty porters from the nearby village. This is lowland forest, the most uncomfortable kind. It is hot and wet, full of leeches and thorns and low tangled vines that impede our way. At 6 ft 7 Jakob has it worse than me. His extra height causes him to disturb a wasp’s nest that the short Burmese passed under. I hear ‘Vespa’ followed by Germanic cursing as Jakob flees the angry wasps. 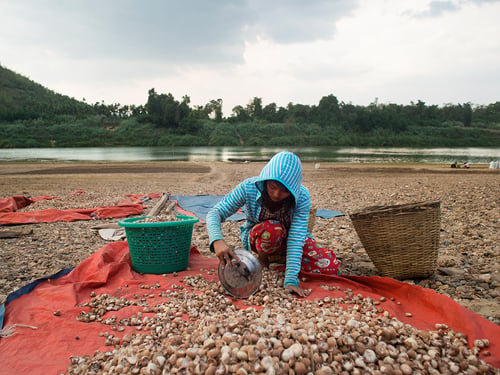 After an hour’s walk I am ecstatic to find elephant footprints. The presence of large mammals will prove this area is a suitable candidate for protected status. Elephants are one of the key species we hope to find, along with Malay tapir, a huge forest bovid known as gaur, plus leopard, or even tiger. My excitement is short-lived after I learn that a domestic elephant had made the tracks. The guide explains we might have to walk three days before we see evidence of wild elephants. 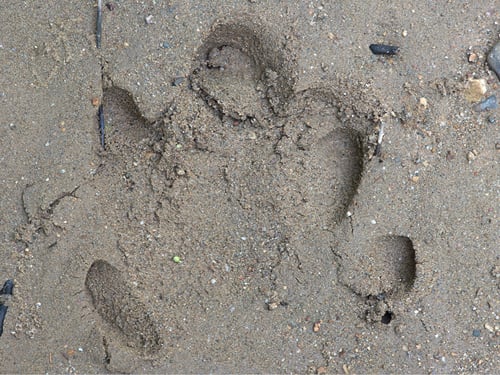 The plan is to walk into the remote heart of the area and set camera traps. For forest surveys such as this, camera trapping is the best way to discover which mammals are present. As with all camera-trapping programmes we need to target the species we hope to find. For large mammals one of the best options is to look for salt licks – places where the large herbivores go to obtain minerals vital to their digestion and health. Our lead guide, a stern-faced local hunter, knew such a place, which, he claimed, lie three-days trek in to the forest. 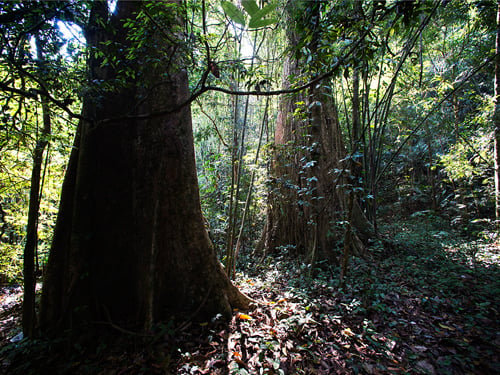 On the second day we left the hot tangled stream valley and headed up into the hills. Our guide told us to take water from the stream before we started climbing: we would not see water again until evening, he said. On the ridge trail we found evidence of tapir, and scratch marks on a tree made by bears and clouded leopard. Jakob collected dung from stump-tailed macaques. By evening we had all run out of water. My tongue felt swollen and dry like an old discarded slipper.

Our guide, who carried nothing but a shoulder bag and homemade musket (a sign of knowledge and superiority), seemed confused by the trail. We had constantly backtracked during the day, and now, high on ridge, he suggested we make camp. The next water was over two hours away, he said, and none of us would make that. I tipped water out of my wellingtons. Not the overflow from a stream crossing, but the day’s accumulated sweat.

According to the guide there was a small stream in the valley below where we could get water. I decided to make the trek down. However shallow this stream was I was intent on bathing away the grime of two days trekking. With a couple of porters to collect water for camp I made the descent into the valley. Arriving at the stream I felt a strange sense of déjà vu. It looked familiar. With horror I realised it was the same stream that we had collected our last water from. Our guide had led us in a huge circle. 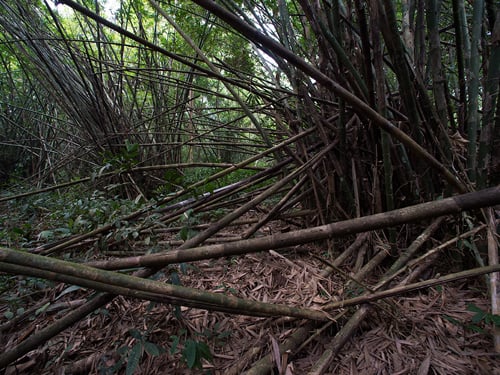 Our expert guide admitted later that he had only been to the salt lick once in his life, and that was almost a decade ago. I groaned inwardly. Our cameras could only be set for one month before the onset of the monsoon. We needed a good location to set them if we were going to get much in that short time. I began to wonder if the salt lick even existed.

Two days later I was even less sure. From our last camp the guide said it was two hours. Five hours and many river crossing later there was no sign of a salt lick.  But on the sandbars we crossed were signs of elephant and the strange tracks of tapir. Large mammals were using this area. We pushed on for another two hours and magically the river widened and the air smelt of sulphur. On the far bank we found what we were looking for: a muddy pool issuing hot bubbling water. The earth around was churned up like a paddock, showing the footprints of tapirs, gaurs and elephants. Perfect. We set 10 cameras and got out as quickly as we could.

That night in the hot sarcophagus of my tent while the rain pelted down and a pool of water collected at my feet I felt happy for the first time on this trip. We had discovered a remote and secret place that large mammals visited and we had placed our cameras. Now all we had to do was wait to prove that this area needs to become part of Myanmar’s protected area system.