Grauer’s gorillas: 10 years on from the first surveys of this critically endangered ape

Ten years ago Fauna & Flora International (FFI) alongside WCS carried out the first comprehensive surveys of Grauer’s gorillas in the Democratic Republic of Congo since the mid-1990s. The survey confirmed this great ape was faring badly, but just how badly took conservationists by surprise. Analysis of the survey data revealed that there had been a 77% decline in Grauer’s gorillas over the course of just one generation, from an estimated 17,000 individuals in 1995 to 3,800 in 2016.

The bushmeat trade and artisanal mining for cobalt – a critical component of modern-day electronics – had taken a deadly toll on the largest of the gorilla subspecies, and not long afterwards Grauer’s gorillas were officially designated as Critically Endangered.

To complicate matters further, these gorillas are spread across thousands of square kilometres, often outside national parks in areas more vulnerable to mining, bushmeat hunting and human encroachment.

Aware of this challenge and the need to encourage communities and conservationists to work together on protection efforts, FFI supported the Congolese protected area authority, the Institut Congolais pour la Conservation de la Nature, to draft the country’s first community conservation strategy, providing guidelines for involving local people in the management of protected areas and natural resources as well as economic development. A new law followed which enables communities to manage up to 50,000 hectares of their own land. This in turn has helped FFI to work more effectively with communities in two unofficially designated reserves – REGOLU and REGUMUKI – on the western edge of Maiko National Park.

Community forests are “a way that we can get communities to be engaged and to be empowered about their land rights and be involved in conservation and decision-making about what’s happening on their land,” says Angelique Todd, senior programme manager for West and Central Africa at FFI. 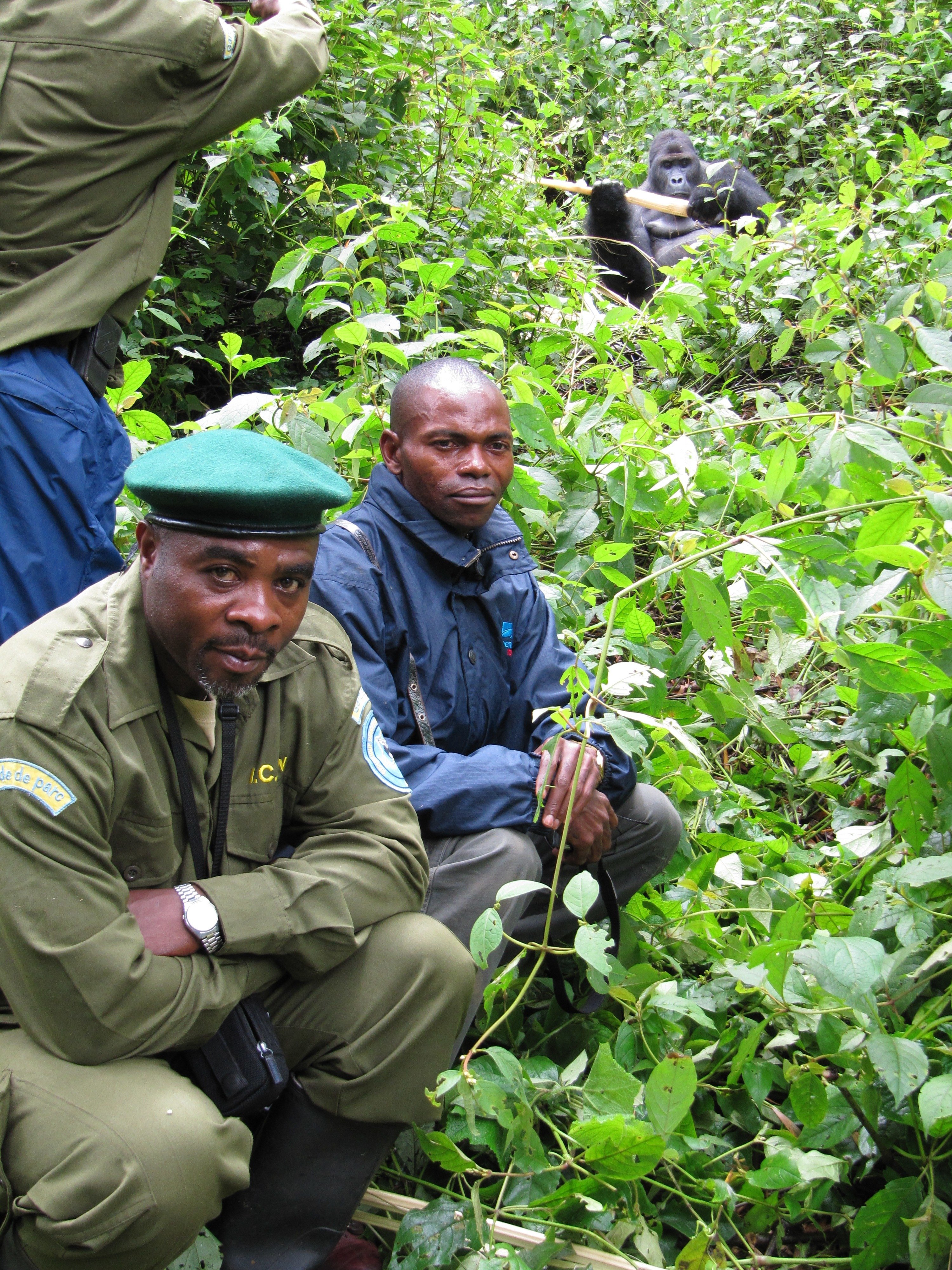 All of FFI’s staff on the ground are Congolese. “They really need to understand the communities and need to be able to go to the site and work alongside the communities. You can’t do conservation in this area without having a relationship with the community,” says Angelique.

As well as monitoring and warding off threats to these great apes, FFI supports community development through a range of projects. Two recent initiatives include providing community members with more fuel-efficient stoves that require less firewood, and establishing a microloan programme to bolster economic opportunities.

Alongside protecting Grauer’s gorillas, FFI’s work across these 1,500 kilometres also benefits the range of other species that share the gorilla’s habitat including the African elephant, eastern chimpanzee, okapi, bongo, buffalo, and leopard.

While capacity building, monitoring, education and embedding conservation within communities has reduced pressures on the identified Grauer’s gorilla groups, the threats remain ever-present. 2018 a study by the University of Uppsala in Sweden found that the plunge in Grauer’s gorilla numbers over such a short time span had reduced the genetic diversity of the subspecies by 20%, making it more vulnerable to disease and environmental changes.

After the shock of discovering such a Grauer’s gorilla numbers had fallen so far, so fast, this finding was another shock to conservationists working hard to protect Grauer’s gorilla.

Weakened genetic diversity has added a further layer of complexity to the job of pulling this magnificent ape back from the brink, a job which is only possible with the generosity of FFI supporters.

“The more support we have,” says Angelique, “the more work we can do on the ground with communities to guard Grauer’s gorilla against threats to its existence and ensure it has a future.”