The tents are up, the wicket prepared. All around, men shout out instructions to one another. And in the distance, a giraffe ambles across the horizon.

This is no ordinary cricket match.

Here, on the high flat plains of Kenya’s Ol Pejeta Conservancy, four teams have come together to battle for sporting supremacy in the Last Man Stands competition.

Forget cricket whites and umpires in long coats. Here, the teams have their own kit colours – yellow and green for the eight guys representing the East Africa Cricket Foundation and Ol Pejeta. Maroon and blue for the Obuya Cricket Academy. Green for the British Army Training Unit (BATUK), which is stationed nearby. 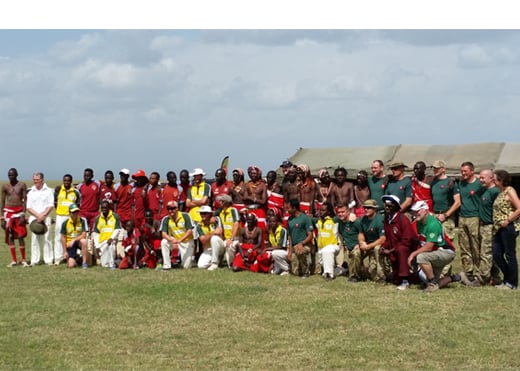 The teams gather for a media photoshoot. Credit: Sarah Rakowski/FFI.

But most striking of all, by far, are the young men dressed in traditional Maasai attire, accessorised with shin pads, gloves and cricket bats.

These are the Maasai Cricket Warriors, who first began playing in 2007 after baboon researcher and cricket enthusiast Aliya Bauer visited a local school to teach the kids about the game. It wasn’t long before a number of young men, who had watched from the side-lines, grew interested and decided to form their own team. 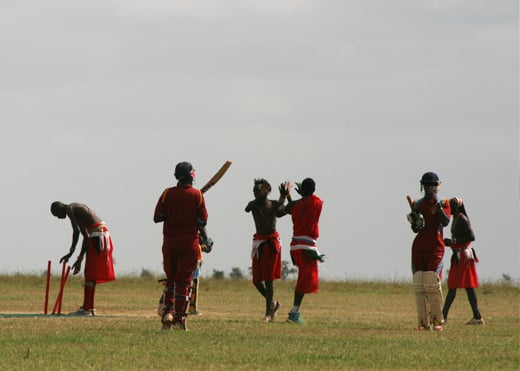 Eight years on, a number of the Warriors are now cricket coaches themselves, having trained through a group called Cricket Without Boundaries. When not playing, they visit schools – using cricket as a way to engage with the youth of their community and talk to them about HIV/AIDS, gender equality and conservation.

Last Man Stands for the #LastMaleStanding

Though cricket is a complex game, the Last Man Stands is a simple concept. Designed to be highly accessible, virtually any team in the world can join the competition. Through a playoff system, teams jostle for position, with the top team in a town or city proceeding to regional, then national and ultimately world championships.

A global phenomenon, the competition now has over 100,000 players around the world and generates a good deal of revenue…but it’s not all about the money.

The Last Man Stands is committed to investing a proportion of its proceeds back into charity – some focused on promoting the game around the world, others looking at broader issues.

It is this charitable element that has brought together these players on the plains of Ol Pejeta. Emblazoned on the backs of their official shirts is the hashtag #LastMaleStanding – not a misprint, but a reference to Sudan: the last surviving male northern white rhino, who lives here at the conservancy. 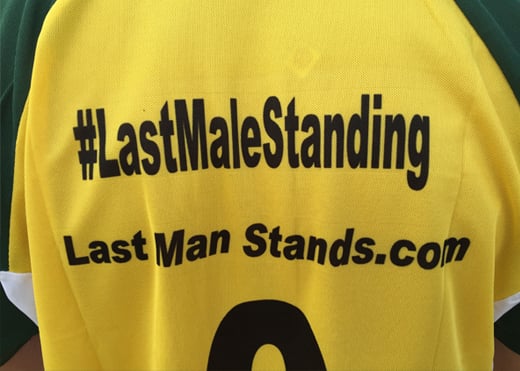 The customised shirts with the hashtag #LastMaleStanding. Credit: Ros Aveling/FFI.

Northern white rhinos have experienced a catastrophic decline over the last three decades, and today are widely believed to be extinct in the wild. In 2009, with support from Fauna & Flora International, the last four fertile animals (two males and two females) were translocated from Dv?r Králové Zoo in the Czech Republic to Ol Pejeta Conservancy in the hope that a more natural environment would encourage the animals to breed.

Sadly, despite a number of couplings, no northern white calves have yet been born, and rhino experts are now exploring other options. Meanwhile, in a further blow to the subspecies, two of the males – one on Ol Pejeta (Suni) and one at San Diego Zoo (Angalifu) – died last year, leaving Sudan as the only remaining male.

Recognising the clear link between the Last Man Stands and the Last Male Standing, and the urgent need to spread the word about the plight of rhinos, staff from Ol Pejeta, Fauna & Flora International, and Last Man Stands joined forces to stage a cricket game at the conservancy. 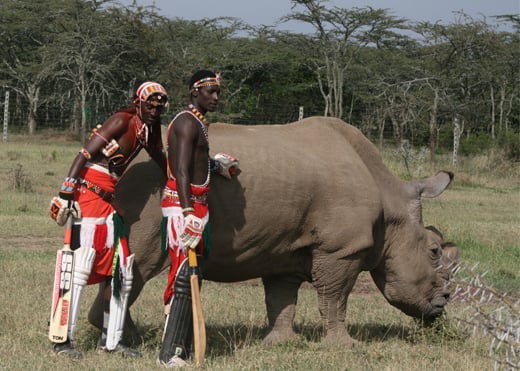 In between matches, the Maasai Cricket Warriors had the opportunity to visit Sudan in his enclosure and learn more about this unique (in every sense of the word) animal – an experience that will be of great value to them when speaking to communities about poaching.

Back at the cricket grounds, the teams’ own supporters were joined by guests and staff from Ol Pejeta as well as people from the surrounding area, forming an enthusiastic crowd. A far cry from pigeons at The Oval, downtime at the match could be spent watching iconic wildlife, with giraffe, zebra and even a rhino spotted from the stands. 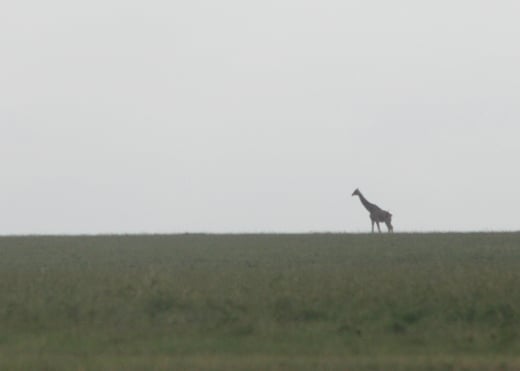 View from the pitch – a giraffe ambles across the horizon. Credit: Sarah Rakowski/FFI.

As one spectator (an ardent fan bedecked in cricket whites) put it: “This might just be the best cricket ground in the world.”

So watch out MCG, watch out Lords and Raipur – Ol Pejeta could be the next top spot for cricket.

You can find out more about how to Keep the Rhino Rangers Safe here.

With thanks to Francis Mulinge Olemeshame from the Maasai Cricket Warriors and Rob Stevenson from Last Man Stands for their help with this article.