Getting to the root of the issue: giving the Niedzwetzky apple a helping hand in Kyrgyzstan

From the relative lowlands of Bishkek we spiralled upwards towards a high mountain pass, breaking the snow line. With a population only one tenth that of the UK, but with a similar land area, much of Kyrgyzstan is dominated by rugged and wild mountain ranges  – and is largely unpopulated. 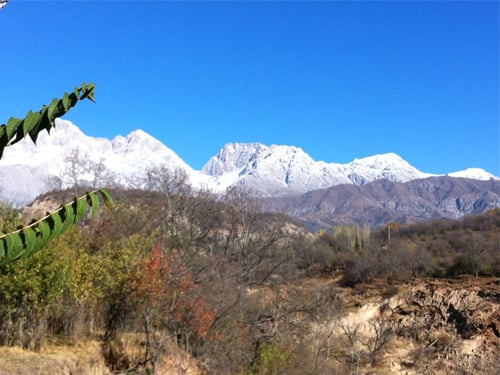 The rugged beauty of Kyrgyzstan is unparalled. Credit: Ally Catterick/FFI

Fauna & Flora International’s (FFI) Kyrgyzstan team and I are on our way to Sary-Chelek Nature Reserve in western Kyrgyzstan. The reserve holds one of the largest remaining stretches of fruit and nut forest in the region – and crucially – is a last stronghold of the Endangered Niedzwetzky apple (Malus niedzwetzkyana). With its bright red flesh the Niedzwetzky is an icon for the region. It is also important for global food security, providing much needed apple genetic diversity and potential resistance to diseases that threaten domesticated apple varieties. 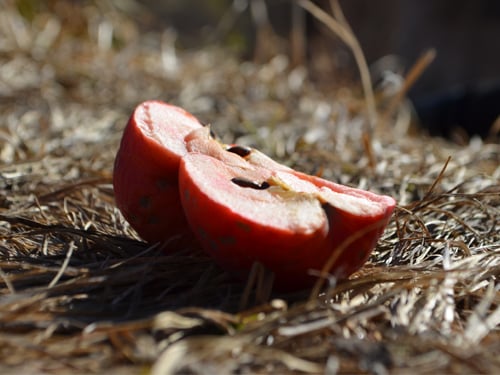 It’s springtime and the rivers are swollen with snow melt and crimson with silt. We pass occasional yurts made of thick animal hide and teams of herdsmen on lean horses driving their livestock towards summer pastures.

When we reach Sary-Chelek, we’re met by Akynaly, the reserve’s Deputy Director and Head of Science. He shows us the reserve’s library with its Russian texts on forestry. The most recent books are from the late 1980s, with no new publications since the dismantling of the Soviet Union. 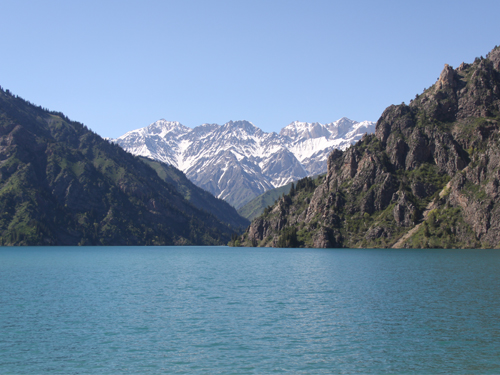 In this region the communist era is looked back on with mixed emotions  – and with a distinct generational divide. The same regime that outlawed religion and eroded ethnic identities, also provided reliable salaries and an improved education system. Akynaly, himself an ethnic Kyrgyz, was trained in Moscow during soviet times.

My companions and I are here to support the reserve’s rangers in setting up a monitoring programme for rare and threatened tree species found in the reserve. Previous surveys supported by the Global Trees Campaign identified 70 adult individuals of the Niedzwetzky apple in the reserve, half the known Kyrgyz population. 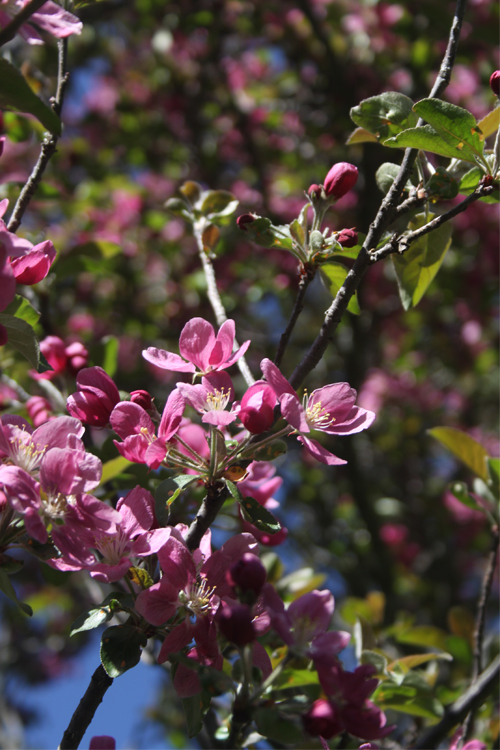 The trees in blossom are a sight to behold. Credit: Robin Loveridge/FFI

After a day of forest surveys, we visit a tranquil mountain lake held by the silent backdrop of majestic peaks. At this high altitude we come across a lone Niedzwetzky apple tree still in blossom, with striking pink flowers standing out in a burst of colour against the landscape.

It was one of those warm, clear afternoon days when it feels good to be alive, and humbling to be a tiny part of the vast wilderness. Coming across the lone tree in this remote setting, it was easy to appreciate the difficulties the species faces, scattered in a handful of isolated populations now separated by great tracks of this formidable landscape.

The following day we visited Padysha-ata Nature Reserve on a monitoring trip to check up on 350 seedlings of the Niedzwetzky apple planted out into the reserve as part of a Global Trees Campaign reinforcement planting project aiming to supplement the fragile population of the species. 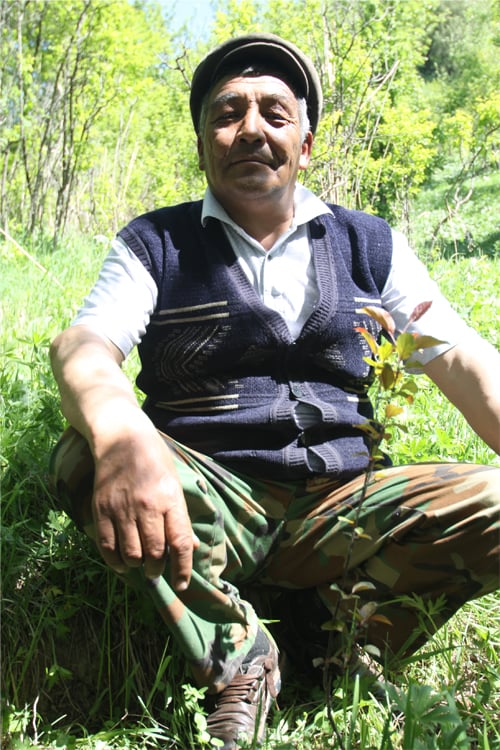 Park ranger Toktogul Jakypov pictured here with one of the 350 Niedzwetzky apple saplings he has planted out into Padysha-ata reserve. Credit: Robin Loveridge/FFI

Grown first in nurseries and now planted out into the reserve it was great to see these small, red-leaved plants making progress under unforgiving wild conditions – but it was clear that continued protection would still be needed. Poorly regulated grazing across the reserve is providing welcome pasture land in amongst the trees to fatten up cattle, a central livelihood for rural Kyrgyz. But each spring, any young plants that poke their first soft shoots up from the earth are eaten by these grazing livestock before growing large and woody enough to be protected. Without these young plants to join the ranks, populations of threatened tree species in these last remnants of fruit and nut forests are slowly aging into convalescence – and a silent population crash.

Difficult compromises will be needed to ensure the survival of this charismatic tree. That’s why the community engagement work of Fauna & Flora International and the Global Trees Campaign is so important to focus attention on these little known species and work towards the delicate balance that conservation and sustainable development needs to strike.