Getting the lay of the land in Namibia

Confined by the Atlantic Ocean to the west and the Great Escarpment to the east, and sandwiched between the Kuiseb River in the south and the Ugab River in the north, the Central Namib Desert’s topography has given rise to a hotspot of unique biodiversity, as well as rich mineral deposits such as uranium.

As a result, the region has seen a flurry of exploration and mining activity in recent years, which in turn has contributed to the expansion of its coastal towns as well as other developments.

To get a better understanding of the impacts of these developments on Central Namib ecosystems and wildlife, the Ministry of Environment and Tourism (through the UNDP/GEF supported Strengthening Protected Areas Network project) tasked a team from Fauna & Flora International (FFI) and partners* to undertake a Landscape Level Assessment (LLA) of biodiversity vulnerability and land use.

The aim is to develop landscape level planning tools that allow decision makers, mining companies and other developers to seriously factor biodiversity in their planning and to provide recommendations for how these tools can be integrated into policy and spatial planning to promote sustainable development.

During my time here, I have been helping the team to research and locate biodiversity data and information, and have also been getting involved in practical work such as the restoration research project that is underway at Gobabeb Training and Research Centre. This is closely linked to the LLA project because Gobabeb advises mines on better ways to rehabilitate desert ecosystems after mining. 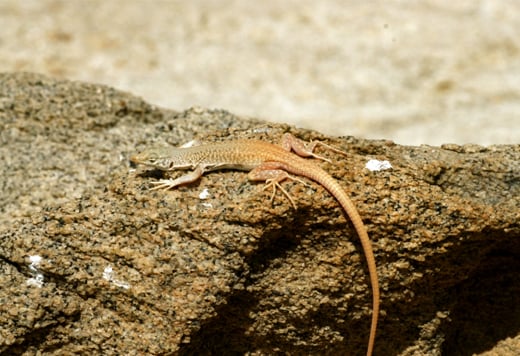 Amongst other things, I have assisted in a study that has been looking at the vulnerable and endemic Husab sand lizard. It is thought to favour only certain kinds of habitat, which therefore need to be protected (credit: Joh Henschel).

The LLA team will be producing maps to show a range of information, from biodiversity in the area to landscape transformation.

In October 2011 the team had a series of meetings with specialists to share an update on project progress, and gather valuable input that would support our spatial analysis and improve our understanding of the landscape and its biodiversity.

Life in the desert: birds, mammals and insects

You may be surprised to learn that there are a lot of endemic birds in the Namib, such as the dune lark and Benguela long-billed lark, as well as Damara terns which breed in gravel plains along the coast and lay their eggs on the ground (even in off-road vehicle tracks!).

One of the meetings therefore aimed to get a better understanding of local birdlife and areas of ecological importance for these species.

All water bodies play an important role as habitats to birds and the whole coastal strip has high diversity and large numbers of birds. Langstrand is particularly important for migratory species because it has the highest density rocky shore. 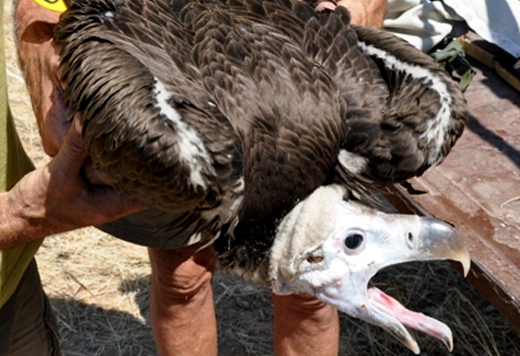 A two month old Lappet Faced vulture chick (credit: Viv Ward). This species is of special importance because its nests host other birds, and because it is highly dependent on large camel thorn trees in the Central Namib as a breeding location. Sadly, these birds are often deliberately poisoned by people.

Coastal towns are developing at an alarming rate and, with the proposed Gecko Industrial Park, one wonders what impact the lights and noise will have on the birds. The near-threatened cormorants live along the coast between Walvis Bay and Cape Cross, so the degradation of the coastline from over-development may mean losing these birds.

During October, the team also met with an expert who still remembers the large mammals that once roamed across the Namib. With all the mining developments going on, the movements of animals that can’t jump (such as zebras and ostriches) may be limited by the construction of big water pipes above the ground.

Based on his experience, the meeting aimed to paint a better picture of which areas are most critical for mammals.

Erongo, for example, is important for the Namib desert bats which are found only under rocks in inselbergs (isolated hills), so there is a need to protect these sites.

It was clear from our discussions that it will not be easy to reverse the mining impacts especially for some unique and endemic species that did not evolve to cope with all these mines and other developments.

It was suggested that the entire Namib should be flagged red (demarcated as a priority area for biodiversity) because there are unique and endemic invertebrates all over the region.

I support this point but also understand that the government wants developments and will need to make a balanced decision. There are still a lot of studies that need to be done to understand insect speciation and threats.

During meetings with experts from the uranium industry (to discuss the most likely development scenarios for the area), it became clear that we need to consider the impacts of all the developments in the region, rather than just focusing on mining.

There are a lot of developments lined up in the central Namib, and the advice produced by the LLA will be vital to help decision-makers make informed choices.

How cool is Google Earth?

I was finally introduced to the world of Google Earth and GIS because I had to digitise current mining footprints within mining licence areas, as well as other areas that have been transformed in some way (e.g. roads and towns).

Google Earth allowed me to view satellite imagery, maps, roads and buildings and I had fun looking at the roads leading to different mines, towns and farms. It’s amazing how clearly visible these mining footprints are, as well as those of lodges and other developments.

* The LLA in Namibia is being carried out by Fauna & Flora International and partners: Anchor Environmental, University of Hamburg, Business and Biodiversity Offset Programme at Forest Trends, EnviroMEND and Gobabeb Training and Research Centre.