“We must not them let die out on our watch.” This is the stark message from conservationists protecting leatherback turtles in the Eastern Pacific who, for the first time in 16 years, have found no nesting leatherbacks in Chacocente, Nicaragua.

Fauna & Flora International (FFI) staff and partners in the country watched with growing concern as the leatherback nesting season in the Eastern Pacific progressed with no sign of the critically endangered turtle. The season ended in early March without the world’s largest turtle establishing a single nest in Nicaragua.

While leatherback turtles are known to forage as far north and south as the sub-polar latitudes, with jellyfish a preferred meal, when it comes to nesting they opt for sandy tropical beaches, and Chacocente is one of their favoured spots.

FFI has been helping to protect sea turtles in Nicaragua for 17 years, and a comprehensive conservation programme – which involves community-led patrols of key nesting beaches and a national education scheme – has resulted in the protection of over 90% of Nicaragua’s nesting leatherbacks.

The East Pacific population of leatherbacks, which nest along the coast of Mexico, and Central and South America, had previously experienced a precipitous decline – principally as a result of the illegal harvesting of eggs and habitat destruction as well as entanglement and drowning as a result of irresponsible and damaging fishing practices. A rapidly warming world is also adding to existing pressures on the species by increasing the proportion of female hatchlings. 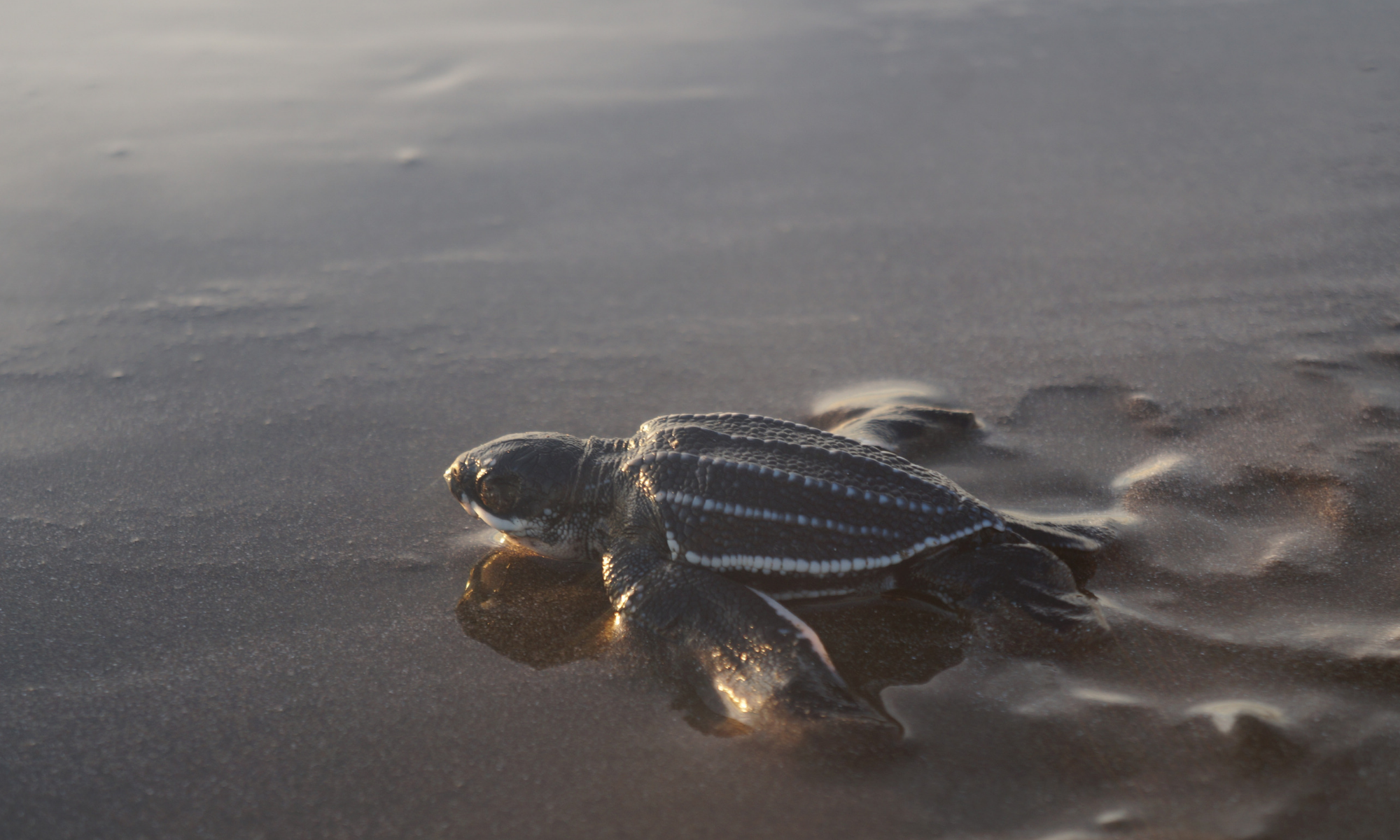 A leatherback hatchling makes its way to the ocean. Credit: Jorge Martinez/FFI

A link to the deep past

Like all sea turtles, leatherbacks rely on a healthy number of juveniles each year to keep the population viable in the long term. This is because young turtles face many hurdles in their early years and have a very high mortality rate; as a result, the lower the number of hatchlings each year, the less likely it is that many (or any) will survive into adulthood. And with fewer males being born, even those who do make it to adulthood will be less able to sustain the population.

Through strict enforcement procedures and awareness-raising campaigns, FFI, its partners and local communities have overseen an almost complete eradication of the illegal harvesting of eggs; the demand from communities for eggs to eat has also fallen off a cliff as a result of this campaign and the national education programme.

Yet in spite of these efforts, leatherbacks are still struggling against many human-made pressures.  This denizen of the deep plays a critical role in marine ecosystems and is the living link to reptiles that have existed for 100 million years. It would be a profound failure of humanity if this gentle giant were to die off forever after having survived the worst that has been thrown at planet Earth, including the event that wiped out the dinosaurs. FFI is calling for more support to ensure this doesn’t happen.

“The unprecedented situation in Nicaragua is alarming and clearly points to the fact that leatherbacks across the Eastern Pacific are in trouble,” said Alison Gunn, Fauna & Flora International’s Programme Manager for the Americas & Caribbean. “Our monitoring work shows this decline in leatherback numbers is a trend and not a blip. While females don’t always nest every year, this is the first time in 16 years we’ve seen no nests in Chacocente. To turn this situation around and save the leatherback from extinction is going to take everything we’ve got. We need people to step up and help us protect this ancient species. We must not let them die out on our watch.”

The world's largest sea turtle is facing a perfect storm of threats.
Please support our efforts to protect these incredible reptiles
on land and at sea.