From itchy to deadly – living with jungle parasites

WARNING: This blog is not for the squeamish!

For biologists, parasites are fascinating. For field biologists, parasites (both internal and external) are something one comes to accept as part of the job. The annoyances and dangers they bring range from the comical but irritating antics of fleas encountered in borrowed beds, to potentially fatal malaria.

My first brush with parasites happened long before I ever visited the tropics. As a schoolboy I reared a tawny owl chick that had been orphaned when the tree its nest was in fell down. As the chick grew, its appetite increased and it became difficult to find enough food to keep it satisfied.

Despite collecting mice from all the neighbourhood cats, the chick always wanted more to eat. I took to cycling the country lanes looking for road-kill birds. It was after returning from such an expedition, with a pocketful of dead birds, that I experienced my first encounter with lice. As the small feathered corpses cooled in my pocket, their lice migrated onto me. I could feel them crawling all over me. My mother was almost hysterical when she discovered she had a lousy son, and I was dumped into the bath at midday – an unpleasant experience for a schoolboy.

Thankfully, bird lice (like many parasites) are host specific and can only live on birds, so I was soon free of them. Other parasites have stayed with me for longer. The ten-inch intestinal worm I passed while at university could only have come from a trip to India I made 18 months before. (On this occasion my mother got more in to the spirit of things and bought me an antique stoppered jar to preserve any future worms that might appear).

One thing that is not generally known about parasites is just how common they are. Some biologists state that over 50% of all known species are parasitic. They range from the beautiful (for instance the otherworldly Rafflesia flower – shown in the main picture), to things that are, frankly, too horrific to recount.

In the jungle, attacks from blood-sucking parasites can be overwhelming. Everything seems intent on relieving one of blood, and I have often discovered three or four types of miniature vampires assaulting me at once.

It might sound nightmarish, but it quickly becomes just another aspect of life in the rainforest. In fact it would be difficult to spend much time in the jungle if one were seriously perturbed by the thought of parasites. Leeches cover the leaf litter, especially after rain, and it is not unusual to stumble through a nest of ticks and get coated in micro hematophagus arachnids. 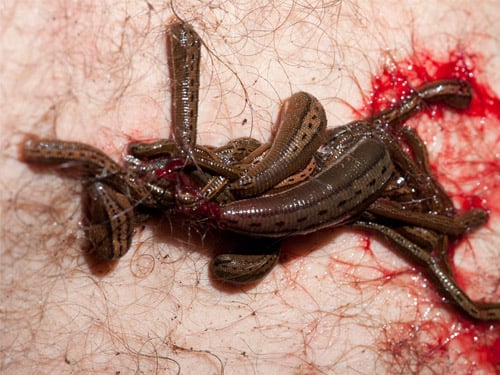 During the rainy season leeches are numerous (credit: Jeremy Holden/FFI).

Leeches don’t usually worry me, unless, as happened once, they attach themselves to my eyeball. More often they manifest themselves with a cold tickling as a bloated barrel-like individual, newly fed, tumbles down my trouser leg. I consider my blood donorism to leeches as a kind of forest tax, and I am amused by the fact that the Vietnamese name for leech is vat.

Most parasites are just an annoyance, like larva migrans, a type of nematode found in civets and forest cats that burrows into the skin. In humans it is stopped from entering the blood stream by sub-cutaneous fat (something not found in most mammals) and for a month or so it meanders around under the skin confounded, leaving an itchy red trail until it finally gives up and dies.

The darker side of tropical parasites is the malarial plasmodium, one of the world’s biggest killers. Most long-term tropical biologists have friends or colleagues who have been taken by it. I have survived it 14 times, but my first counterpart in Cambodia died of cerebral malaria days after we got back from the field.

A maxim I particularly like – as it seems one of the few things that is actually true – is “where there’s a plus, there’s a minus”. It can work inverted, too. But I have decided that in the case of my relationship with parasites, there is never a plus, it is always a minus – usually my blood.