From Bee-burners to Beekeepers – a slow but sweet revolution

On the island of Príncipe, in the Gulf of Guinea, the traditional way to collect honey from wild colonies of honeybees is to use a destructive method that includes burning the nest, and therefore killing most of the bees. The traditional collectors are known as “queimá vunvú” which literary means “Bee-burners” in the local forro dialect.

Over the last few years, government officials have reported that the practice of burning wild bee colonies has had a significant impact in the abundance of bees in Príncipe. It is getting harder and harder to find wild colonies, and those that remain are mostly small and young. They also expressed a desire to promote sustainable bee keeping as a way to reduce the pressure on the wild hives. 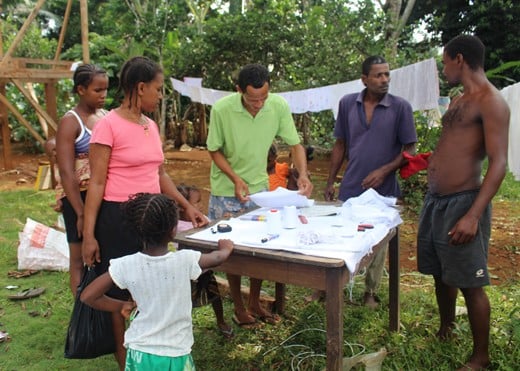 Preparing the material to sew our first locally made beekeeping suit at Ponta do Sol. Credit: Felipe Spina/FFI.

Bees are well known to produce honey, wax and propolis (‘bee glue’ which is used in certain medicines and as a varnish ingredient by some string instrument makers). However, many people are unaware of the crucially important role that bees play as the most efficient pollinators of nature. They are responsible for the reproduction and perpetuation of thousands of plant species, contribute enormously to food production and food security, and maintain the equilibrium of ecosystems.

It has been said that one out of every three bites of food we eat depends on pollinators such as bees, butterflies, birds, bats and beetles. Pollinators transfer pollen and seeds from one flower to another, fertilising the plant so that it can grow and produce food. Some estimates say that bees are responsible for 80% of all pollination today. Without them, many plants (including the majority of food crops) would die off.

In order to help in the conservation of such important animals and to maintain the crucial environmental services they provide, Fauna & Flora International (FFI) and Príncipe Trust have joined forces with the local government to turn bee burners into bee lovers, by raising awareness of the importance of honeybees as pollinators and providing beekeeping training for local cooperatives. 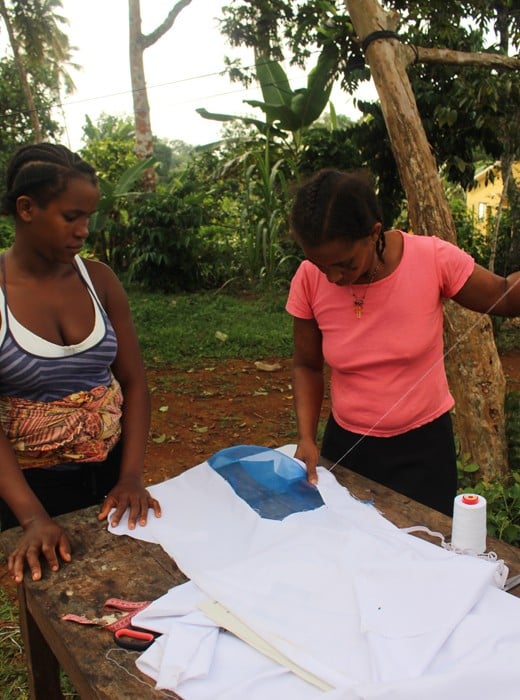 The beekeeping suit prototype in the process of being sewed. Credit: Felipe Spina/FFI.

We have also been teaching people how to produce the materials they need for beekeeping, using resources that are available locally.

Alongside this, we have been working with the government to create a regional law to protect the bees.

You can see this work in action in the photos below, taken during our latest workshop, where local people learned how to produce their own beekeeping suit and build “bee-bait boxes” to sustainably harvest bee swarms from the wild in order to start their beekeeping production. 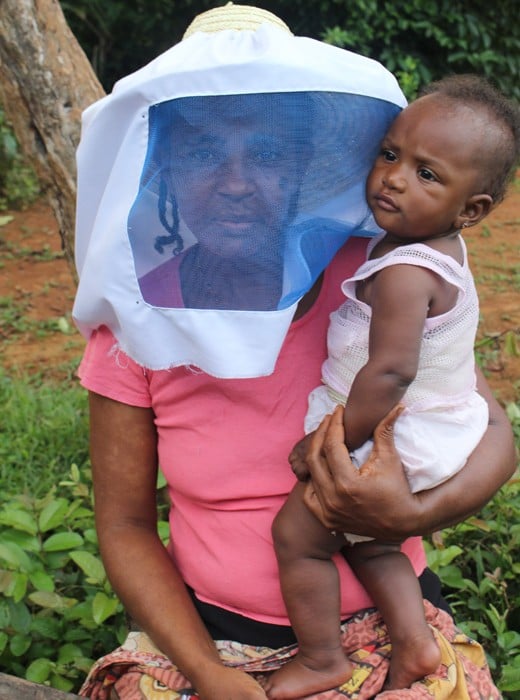 The ladies where delighted to pose as “beekeeper models”. In this picture you can see the details of the head part made with cotton, mosquito net and a straw hat. Credit: Felipe Spina/FFI. 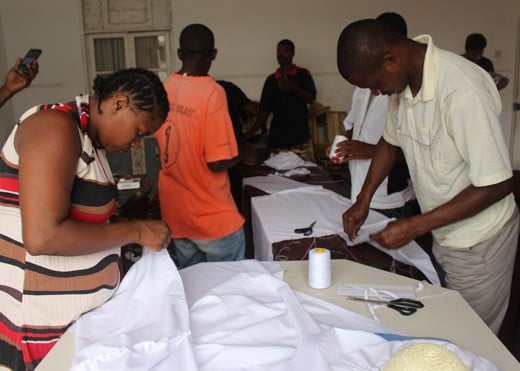 Future beekeepers measure and begin to sew their beekeeping suits at our workshop attended by locals from eight different communities. Credit: Felipe Spina/FFI. 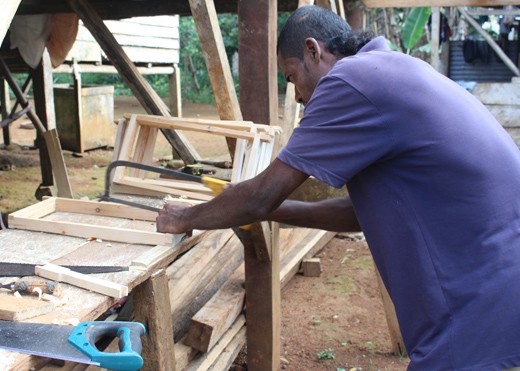 Preparing our DIY frames for the beehive and bee-bait boxes at Ponta do Sol. Credit: Felipe Spina/FFI. 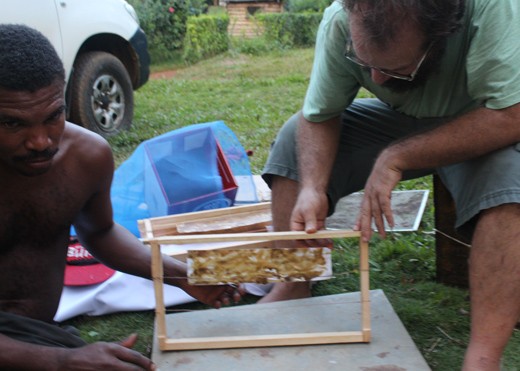 Time to bait the frames with some paper strips with melted bee wax to attract the swarms and sustainably harvest our first colonies. Credit: FFI. 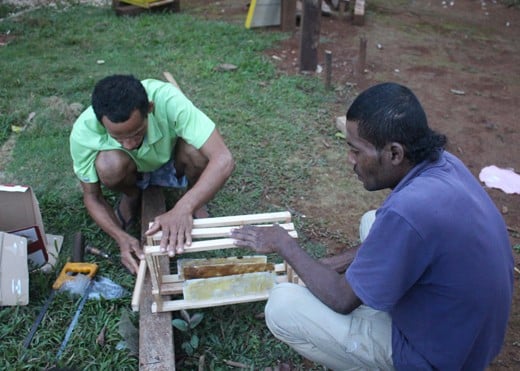 After that we secured 3-4 baited frames together so that we could place them in the bee-bait boxes (recycled beer cartoon boxes wrapped with plastic tarp) and hang them in the trees. Credit: Felipe Spina/FFI. 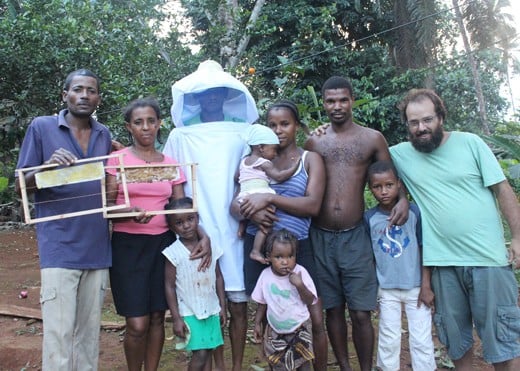 After a day of joint family effort, we succeeded in building our first prototype beekeeping suit and a few bee-bait boxes together with Antonio’s Morais family at Ponta do Sol. Credit: FFI.

After the prototype success we organize a workshop to share the skills with our future beekeepers. Credit: Felipe Spina/FFI. 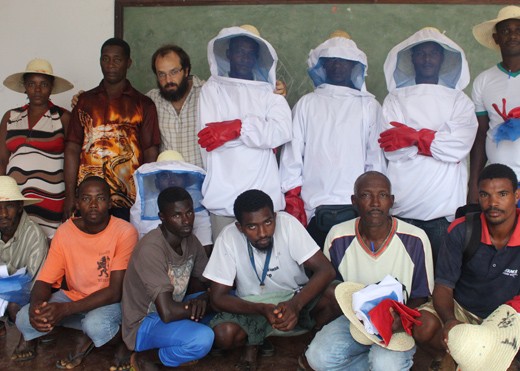 After a hard day of work most of the teams succeeded in sewing their beekeeping suits. All the participants were given materials to finish their suits so they could start working sooner. Credit: FFI.