When we started a camera-trapping programme on Da Lai Mountain in Cambodia the aim was to determine whether the elephants found there constituted a viable population and if they were actually breeding. We were all surprised at how quickly results came in and how unequivocal and graphic they were.

The ten cameras we set covered only a tiny fraction of the landscape, but yet directly in front of one of them the elephants chose to mate. There was no doubting what was going on in the photographs: the elephants of Da Lai were definitely breeding – or at least doing their best to try. It was what we needed to know, or one of the things we needed to know.

Population size was also an important factor, as was group composition and the size of the elephants’ home ranges. Armed with this knowledge the Cambodian Elephant Conservation Group (CECG) could decide what conservation action needed to be taken.

Across their range the Asian elephant is in trouble. Hunting them for the valuable ivory of their tusks is the least of the problem. As large, group-living mammals with large home ranges, habitat loss has a much greater impact on elephants than on any other creature in this landscape. Conversion of their natural habitat to farmland and plantations only leads to conflict, and the elephants, despite their superior claims to the land, are almost invariably the losers.

It has been proposed that as much as 50% of the wild elephant population in Cambodia has been lost in the last 75 years.

In Asia, where the elephant is almost a saintly animal, they are often afforded a degree of respect. Unlike their African cousins, Asian elephants have accepted a domestic role and as a consequence entered into the fabric of many Asian cultures. 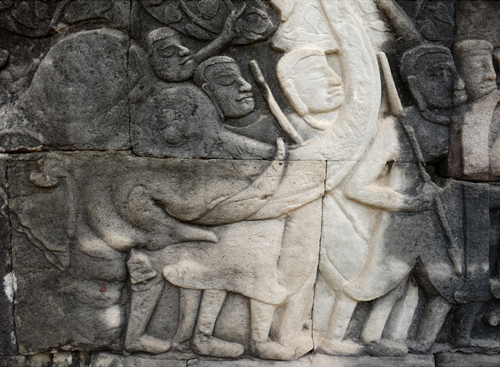 Elephants were part of the Angkorian society’s cultural fabric as this scene from Bayon Temple shows. Credit: Jeremy Holden/FFI.

In Cambodia this relationship is clearly seen in the stone friezes of Angkor Wat. For the Angkorians, the elephant was a status symbol, a means of transport, a living truck in peace times and a living tank in times of war. The great elephant wall in the heart of the Angkor complex testifies to the respect that this culture afforded the largest and most mysterious of beasts.

Today elephants have lost their place in Khmer culture and are largely forgotten. Only in the remotest corners of the north-east of the country are elephants still used for labour; while ‘Sambo’, the last street elephant in Phnom Penh – a popular if ill-advised attraction at Wat Phnom – has now retired.

Wild elephants are disappearing, too. There are an estimated 400-600 elephants remaining in the Kingdom – such a low number that every population, however small, is of great value. Over the first year of camera trapping on Da Lai it became clear that the population on the mountain was not as high as locals had told us. In fact it was almost as low as it could be – just two animals.

Usual herd dynamics sees the bulk of the herd made up of females and young males led by a matriarch. The adult males wander the forest alone. The cameras showed us that, as the last two individuals, they were sticking together. Over three years we almost never photographed them apart. These two elephants also kept to the flat, forested area on top of Da Lai, an unusually circumscribed range for a species that often wanders widely.

The gestation period of an elephant is around 21 months. It seemed worthwhile keeping the camera-trapping programme running for at least this long. Only then might we discover if the mating we had so graphically recorded had been successful. 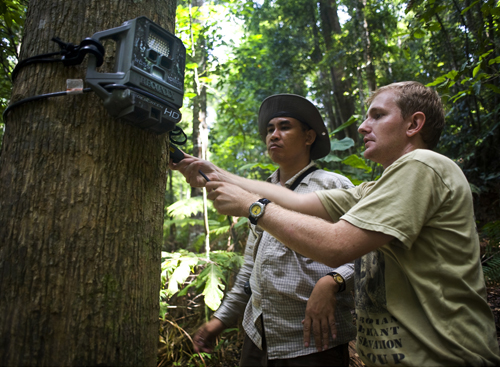 Matt Maltby, who was leading the CECG at the time, agreed and expanded the camera-trapping programme to 20 cameras – using an updated model that filmed short video sequences. It was also Matt who noticed the female looked a little swollen.

We had an ‘is she, isn’t she?’ debate, but couldn’t decide if she was podgy from the rich jungle diet, or pregnant. Her mate, however, seemed aware that she was. In one touching sequence, reminiscent of Sir Walter Raleigh and Queen Elizabeth, we see him clearing a fallen tree from his mate’s path so that she may easily pass. I hate to anthropomorphise, but the solicitous moment they share after seems like that of a husband trying his best to be as involved in the pregnancy as nature will allow.

After almost three years of camera trapping we had learned a lot about Da Lai and obtained some valuable footage. We had recorded a healthy population of forest cattle known as gaur that were certainly breeding, discovered that the prey base of wild pig is considerable, captured rare footage of a pair of clouded leopards, and the first wild video sequence of hog badger and its cubs.

The absence of any tigers was disappointing, and the fact that we only ever got the same two elephants was also worrying. As is all too common in mountainous areas, agricultural encroachment and road building have begun to fragment the forest and the result is the kind of dynamics we found on Da Lai. With the absence of tigers the pig population has exploded; while the increased isolation of the mountain has effectively trapped the elephants. It is a familiar situation.

Shortly before the onset of the rainy season this year we decided to wind up the camera-trapping programme on Da Lai. The elephants had not yet produced a calf and we had now covered the gestation period. But we were in for one last surprise. We had started the programme with graphic photographs of elephants mating. It was therefore fitting that in the very last batch of videos we caught a brief sequence showing our female elephant hurrying across a saltlick with a tiny calf.

She had been pregnant all along!

During a recent workshop organised by FFI on the Asian elephant the Cambodian Government agreed to set a goal of doubling the number of wild elephants in the country over the next twenty years.

For CECG, the Da Lai couple and their new offspring have become symbolic of the fight to save Cambodia’s elephants. Isolated and beleaguered, they are doing their part for the future survival of their species; let us hope we can do our best to help them.