Following in the footsteps of tigers

Exactly when I saw my first tiger is, I am ashamed to say, lost to me. A lower school day trip to Whipsnade Zoo gave me my first memory of a live tiger. I recall it pacing the limits of its small enclosure, and I was struck more by its palpable air of boredom than by its physical presence or its beauty – although both of these impressed themselves upon me. Except for the theft of my schoolmate’s bag by a toothy horse, the one memory I retain of that trip is the pacing tiger and the sense of injustice it evoked.

Years later, in India, I passed very close to the famous tiger reserve of Kanha. I knew that if I stopped there I had a good chance of seeing a wild tiger. This would likely occur from a jeep or the back of an elephant, and to my mind this was little better than seeing a captive tiger. Admittedly this one would be in its own domain, but I would be the prisoner, trapped in a swaying howdah. I felt that to see a tiger one had to see it on its own terms. If I were to see one, I decided, it must be in the forest face-to-face or not at all. 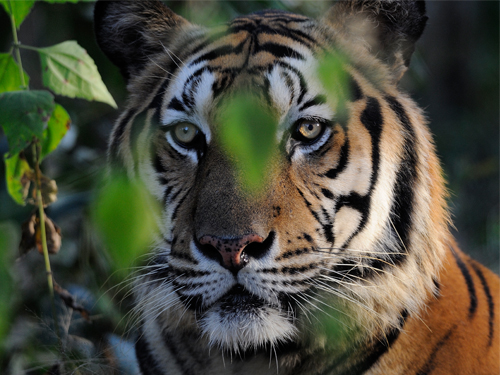 Coming face-to-face with a wild tiger is something that most people can only dream about. Credit: Jeremy Holden/FFI.

There is much more to the tiger than its physical presence. Talking to local people that live alongside them will confirm this. In the human mind, the tiger has an almost metaphysical existence and is revered as a ‘just’ but unpredictable animal. Experiencing these things was what seeing a tiger was about.

The rainforest of Sumatra was the first place I set out to look. Sumatra is now a stronghold for the last surviving subspecies of Indonesian tiger (there were once three) and a place that has developed deep spiritual links with the animal. I learned then what local people have always known: that the tiger is there, but you can’t see him. The particular pattern of a tiger’s fur (the stripes also occur on the skin, like a tattoo) and the highly developed knowledge it has of its environment give it a cloak of invisibility.

I saw the flower-shaped pug marks often, occasionally made within minutes of my arrival. But the tiger remained elusive. Tigers saw me, I don’t doubt, and I was followed on occasion – sometimes finding fresh pugmarks across my own recent boot prints.

Once, in Sumatra, I even photographed a tigress that followed me as I was setting camera traps to record the rainforest animals. These camera units record the date and time on every occasion an animal passes. I set three that day, the last one at 1600h. I checked them the next morning and discovered a tiger had passed through this same trap at 1635h. A tigress. She had followed me back to camp and was photographed twice more on the other two cameras. From her tracks I could determine that she had been close by all afternoon, perhaps watching me work from behind a curtain of leaves. 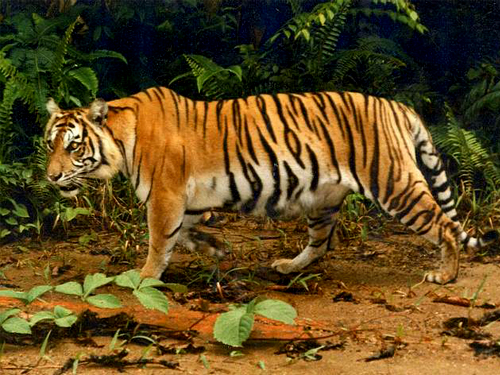 A female Sumatran tiger in Kerinci Seblat National Park who had a habit of following Jeremy around. Credit: Jeremy Holden/FFI.

This behaviour may sound sinister – it could certainly be made to seem so – but I think it shows curiosity, intelligence, and that perhaps tigers are as fascinated by us as we are by them. I began to understand why forest people respect them. “If you do not harm him, he will not harm you,” is something I have often heard said.

The law of the jungle

During my time in Sumatra there were people eaten by tigers, but almost without exception these animals had suffered a degree of human threat, and their actions seemed like natural justice. In the last such case, a woman was attacked and killed by a tiger that had been poisoned and was found dead shortly afterwards. It is believed by many societies that live with them that tigers can and will exact revenge.

So the tiger teaches respect and, as the locals say, those that enter the forest with respect will be unharmed.

I discovered this for myself when I finally saw a tiger one evening as I was walking back to camp alone. It was a large male whose presence in the area I had noted from his tracks, but had never photo-trapped. We met head-on as he came out of a side path onto the trail 30 yards beyond. 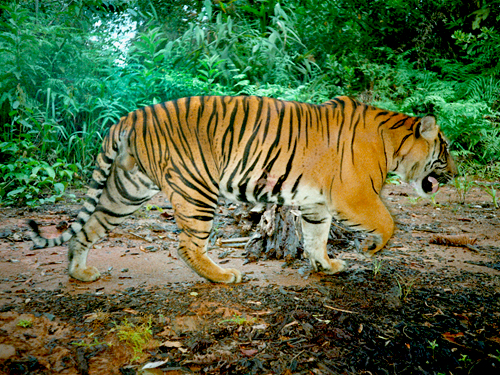 A male Sumatran tiger walking through a camera trap just minutes before Jeremy bumped into him on a forest trail. Credit: Jeremy Holden/FFI.

I wanted him to stop and look at me, for a moment to occur when I would be snatched back in time and become that lone hominid in the face of a predator. But this great cat reared up like a horse and dashed away, perhaps berating itself for its carelessness.

I never lost a respectful fear of tigers, but I came to regard them as something like Shakespeare’s Prince of Darkness – a dangerous beast but also a fine gentleman, or in one case, gentlewoman.