HOÀNG V?N TU? knows just how difficult conservation can be in Ha Giang. Undoing the buttons on his uniform’s shirt, he reveals to the camera crew a jagged scar running from his neck down to his shoulder. Other scars transect his left forearm and one of his feet. Mr Tuê, the Chief of the Conservation for the Forest Protection Department of Ha Giang, was attacked with machetes by illegal loggers for having confiscated a load of magnolia timber – but lived to tell the tale.

I’m joining a film crew from Vietnam Television Channel 2 (VTV2) to visit the very farthest reaches of Ha Giang to document FFI’s ongoing efforts to help conserve the Critically Endangered Tonkin snub-nosed monkey (Rhinopithecus avunculus). As a veteran representative of the government, Mr Tuê is a vital member of the collaborative effort between FFI, the government, and the local ethnic minority community to conserve the snub-nosed monkey and preserve its habitat. 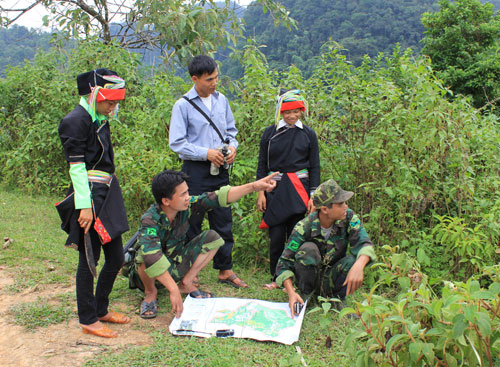 FFI Community Conservation Team members explain the current location of Tonkin snub-nosed monkeys, and offer alternative solutions on where crops may be planted so as not to affect remaining stands of forest. Credit: Nguyen Duc Tho.

As documented by Josh Kempinski in his blog Happy Returns to Vietnam, the highland frontier of Vietnam is remote and difficult to patrol. Inadequate resources on the part of the Government means that FFI has to depend on the local community to help guard the forests where the monkeys live. FFI is currently funding a number of Community Conservation Teams who are responsible for monitoring the densest portions of the forest, watching for loggers and poachers, and documenting forest degradation and deforestation. 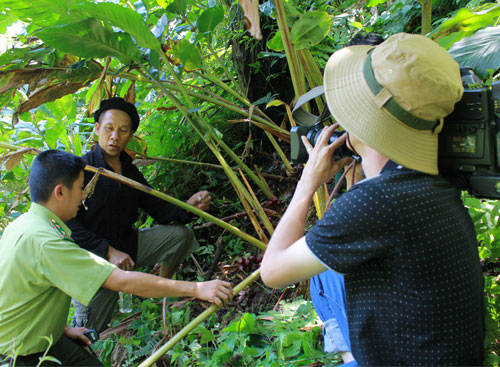 A Tày (Thai) ethnic minority community leader points out illegally-planted cardamom to the VTV2 cameraman in a forest in Ban Thang Commune. Cardamom cultivation in the forests leads to thinning of the canopy and sub-canopy, a precious habitat for the Tonkin snub-nosed monkey. Credit: Nguyen Duc Tho.

The camera crew soldier on in the sun. The terrain we traverse is a gruelling slog over extremely rugged limestone karst. Mountains shoot up from deep canyons formed by the action of rivers over thousands of years on the area’s limestone landscape. 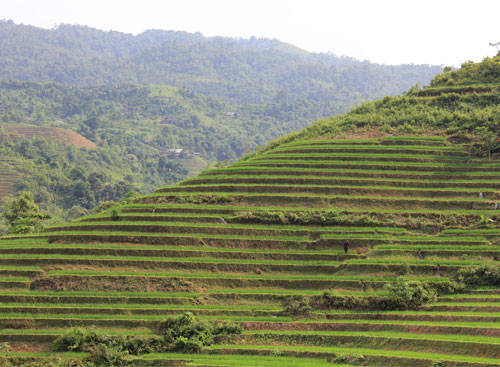 A Black Ðzao woman stands on a rice terrace in Khuoi Loa village. Intense cultivation of rice and maize increasingly encroaches on the remaining stands of Karst and other sylvan landscapes in the highlands of Vietnam. Credit: Nguyen Duc Tho.

These mountains are actually a boon to the monkey’s survival, making the tracts of forest which comprise their habitat difficult to reach. Yet serious population pressures increasingly erode their habitat, with fields and mines often running right up to the edge of the forest. Resource extractors such as poachers and loggers also find forest products such as magnolia timber and monkey bones valuable on the international market. 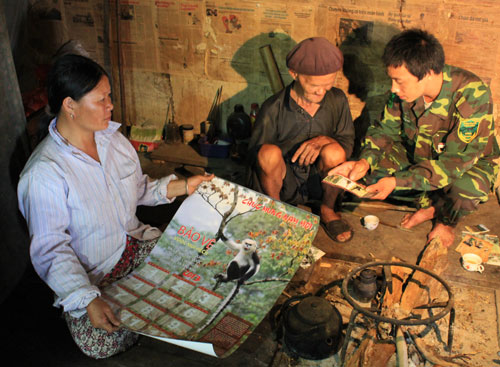 FFI has thus launched a multi-pronged intervention with the local community, to aid them in their efforts to sustainably manage the forests and land they depend upon. The camera rolls as staff from the Forest Protection Department, local teachers and FFI’s Community Conservation Teams teach local children and members of villages on the edge of the forest about best practices for forest management. 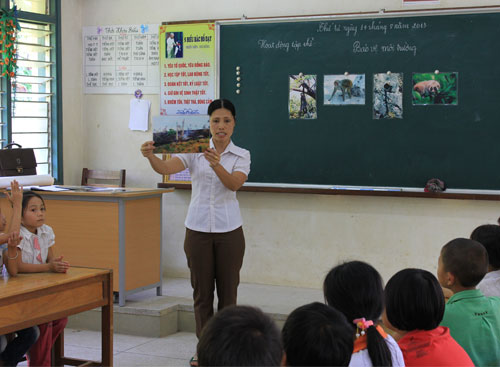 A teacher at Ho Chi Minh Primary School in Minh Son village teaches children about local endangered species, and the impact habitat destruction has on them. Credit: Nguyen Duc Tho.

We film buffalo pens and fields of fodder which FFI has provided villagers for alternative livelihood schemes to ease their dependence on forest products. Mr Tuê and the cameramen wilt under the hot sun as Community Conservation Team members check to ensure that local villagers are not converting valuable monkey habitat to maize fields. 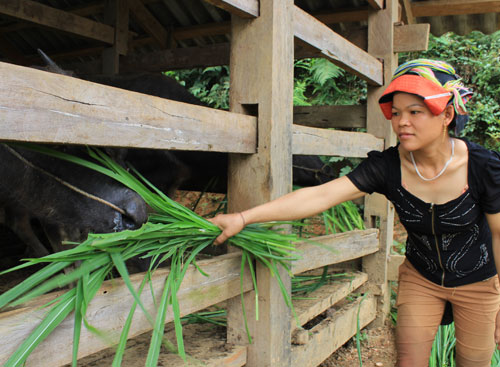 A Black Ðzao woman feeds elephant grass fodder to water buffalo in a pen in Khuoi Loa. This system was set up by FFI to provide alternative livelihoods for local community members to lessen their impact on the forest. Buffalo forage heavily on the forest, causing constant attrition of forest boundaries. Fodders such as elephant grass are a good substitute for forest foliage. Credit: Nguyen Duc Tho.

Conservation is never easy, as Mr Tuê knows far too well. Yet it is a battle that preserves more than just the Tonkin snub-nosed monkeys and their precious habitat; it preserves our cultural heritage. 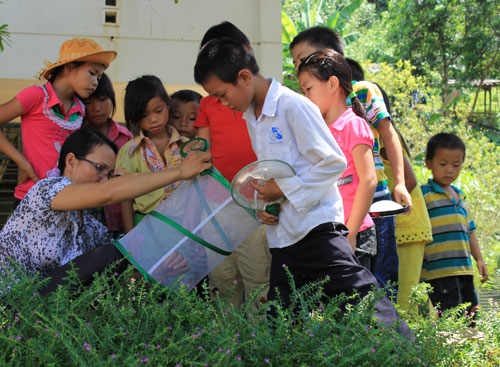 Children from Ho Chi Minh Primary School in Minh Son village learn about the creatures in their back garden; equipment provided by University of Colorado, Boulder and Denver Zoo. Credit: Nguyen Duc Tho 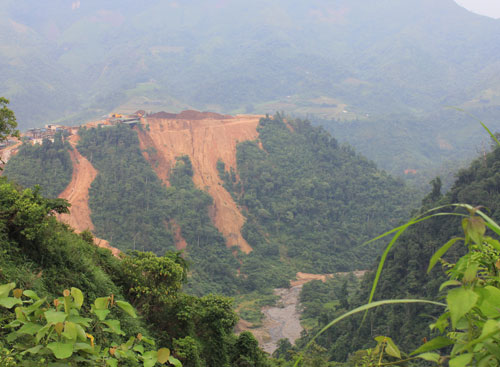 A zinc and lead strip mine stands on a hill (once covered in endangered forest) in Khau Ca, dumping tailings and silt into the river below. Credit: Nguyen Duc Tho. 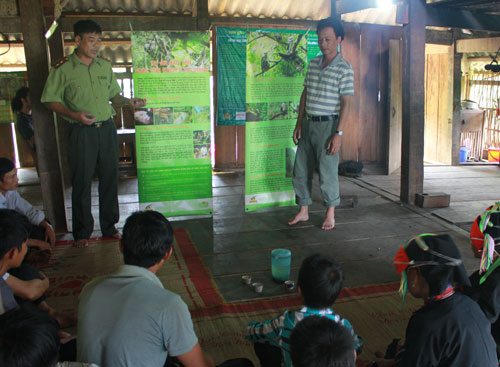 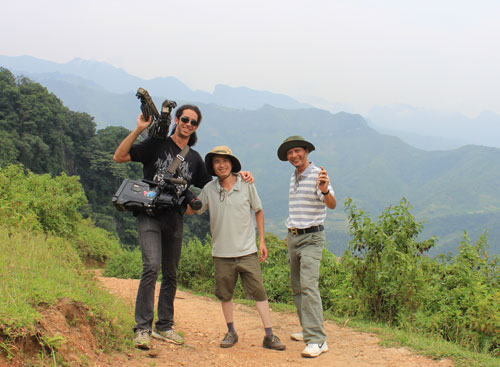 The VTV2 documentary team at the end of a hard day of shooting. Credit: Nguyen Duc Tho.