Feeling peckish? You probably won’t after this

Field researchers visiting distant and obscure places are expected to return with barely credible stories about the strange and repulsive foods they encountered, and which of these they were coerced into eating. Ram’s testicles, sheep’s eyeballs, and stir-fried scorpions are just a few examples.

We have all had to face some stomach-churning meals in out-of-the-way places. As an ‘aesthetic vegetarian’ – I don’t like meat rather than feel a strictly moral aversion to it – I have avoided many of the more gag-inducing fare served on my travels – boiled dog and laterally bisected duck heads, for instance. But I have developed an interest in the aesthetics of eating – what is acceptable to some and offensive to others, and why this should be so. Why do the British happily eat cows, but vilify the French for chomping on horses? Why shellfish but not snails? Or turtles but not frogs? What forms the basis of these aesthetics, or underpins culinary taboos? There are, of course, many answers. But there are also serious practical considerations in these questions. 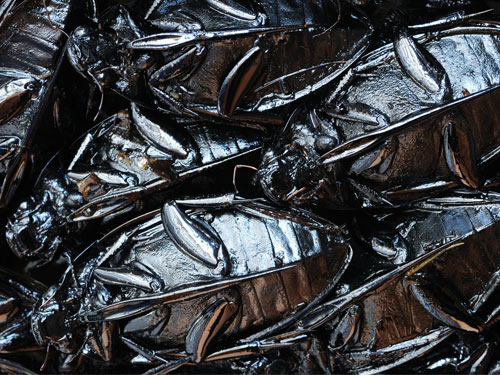 The unfathomable nature of what to me seems exotic cuisine arises from the fact that it often originated from necessity rather than choice. In wartime Paris, when other meat was unavailable, cats and rats were once on the menu. Today one might be hard pressed to find rat meat served anywhere in Paris, but in undeveloped rural areas of Asia it is not an unusual protein supplement, and there are traveling rat-catchers who make their living trapping rats for the pot.

So choosing what is acceptable to eat is firstly determined by need. Need offers no choices. For most of us, the need aspect is no longer a consideration. But sometimes, foods that arise through hardship become a delicacy and a new aesthetic line is drawn. 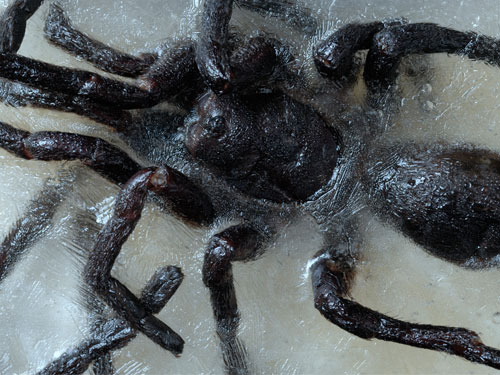 One good example of this concerns tarantulas in Cambodia. These huge hair-covered spiders are avidly collected in certain parts of the country, fried in a mix of oil, garlic and herbs, and then eaten. This is not a long established tradition, but one that evolved during the brutal regime of the Khmer Rouge. A starving population was forced to eat whatever it could find – despite the prohibition from the government on eating wild food (to do so suggested that the regime was not providing enough). At this time, tarantulas morphed from scary spiders into a means of survival. They are actually full of protein, something that was demonstrated recently when two French backpackers who became lost in the South American jungle were able to survive for seven weeks thanks to their ability to catch and eat tarantulas. In Cambodia, what was once a necessity has now become a delicacy, so much so that tarantula numbers have declined rapidly in some areas. 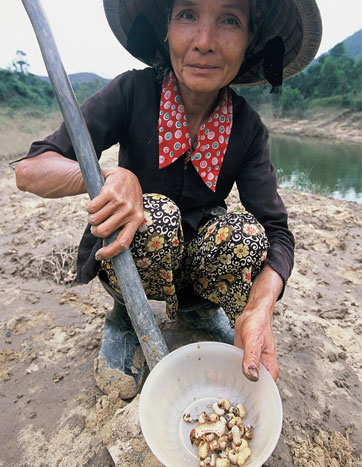 In South–east Asia there is a history of entomophagy (insect-eating), and although not insects, tarantulas fall into the entomophagous category. Bags of fried crickets, water beetles or giant water scorpions are the Khmer version of crisps, and overloaded market barrows heaped with fried insects are a particular feature of Phnom Penh’s night markets.

The sight of oily heaps of fried crickets might excite the gag reflex in some, but in fact entomophagy is a very ecologically friendly alternative to mammal meat, and perhaps one that should be considered with some seriousness. This is not a new idea. The potential value of eating insects was so apparent to the 19th Century entomologist Vincent Holt that in 1885 he wrote a book about it, Why Not Eat Insects? In a world with a rapidly growing population that demands a higher standard of living, the cost, both financially and environmentally, of producing enough meat will eventually become prohibitive. Humankind will need protein from somewhere, and as the seas get depleted we will have no choice but to turn to other sources. Insects might well be the answer. 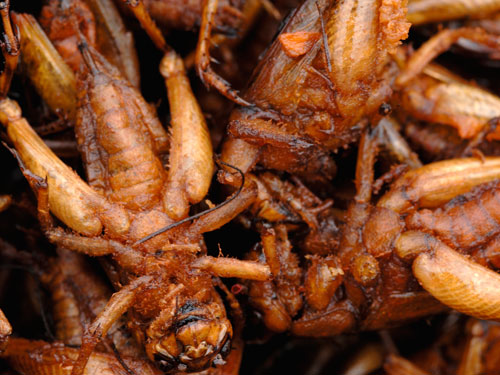 In terms of efficiency, there is no justifiable reason for using mammal meat above that derived from insects. The food conversion efficiency of insect protein can be 20 times higher than that of beef. Insects are not fed on cereal (that itself requires large areas of land to produce) they need very little water, generate less greenhouse gases, and breed rapidly. The only arguments left for not utilising insect protein instead of that derived from mammals become aesthetic ones. 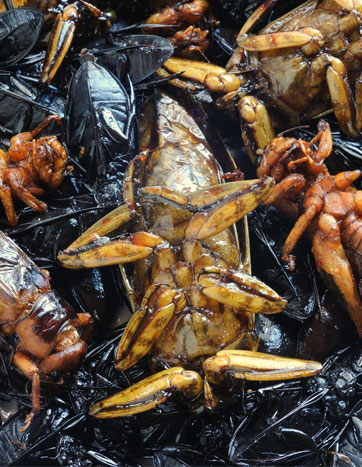 Luckily for me my aesthetic line is not drawn at insects, and I have tried most of them I have come across, even tarantulas. The soapy taste of some aquatic hemipterans I tried in Cambodia was foul, but most insects I have eaten were delicious. My prediction is that as land and water become more limited, insect protein will become a serious alternative for feeding our unwieldy Human population. I have already started: now, if I want a snack to accompany a dry martini, I pass on the peanuts and pop outside to get a bag of fried crickets.