Forget the peculiar creatures populating the pages of Alice in Wonderland. This is your chance to follow in the footsteps of the intrepid explorers who have just delved deep into a West African fantasy world filled with fanged frogs, lipstick-wearing snakes and folding tortoises.

Last year, with support from the United States Agency for International Development (USAID) through its West Africa Biodiversity and Climate Change (WA BiCC) programme, Fauna & Flora International (FFI) and our local partners began unlocking the secrets of the Ziama-Wonegizi-Wologizi Transboundary Forest Landscape, a wildlife hotspot straddling the shared border between Guinea and Liberia.

Home to some of West Africa’s most iconic and endangered wildlife, these forests also harbour other biological riches, including a breathtaking variety of amphibians, lizards, snakes and other reptiles – collectively labelled as ‘herps’ (short for herpetofauna) by the experts. Survey teams comprising FFI staff, rangers from Guinea’s Centre Forestier de N’Zérékoré and Liberia’s Forestry Development Authority, external consultants, students and communities set out to document this diversity. 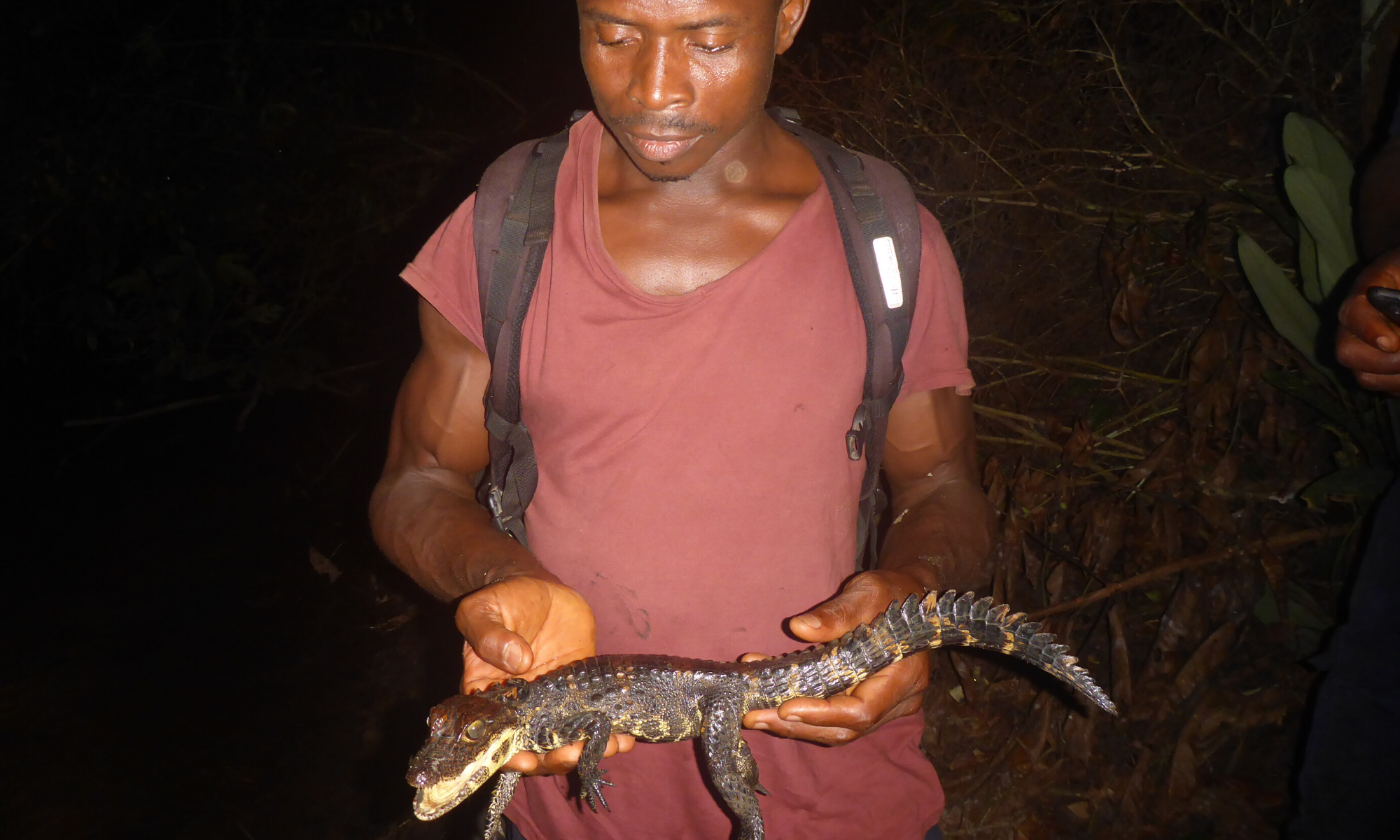 Two reptilian rarities were recorded on the Liberian side of the border in Wologizi: the dwarf crocodile and the intriguingly named Home’s hinge-back tortoise. 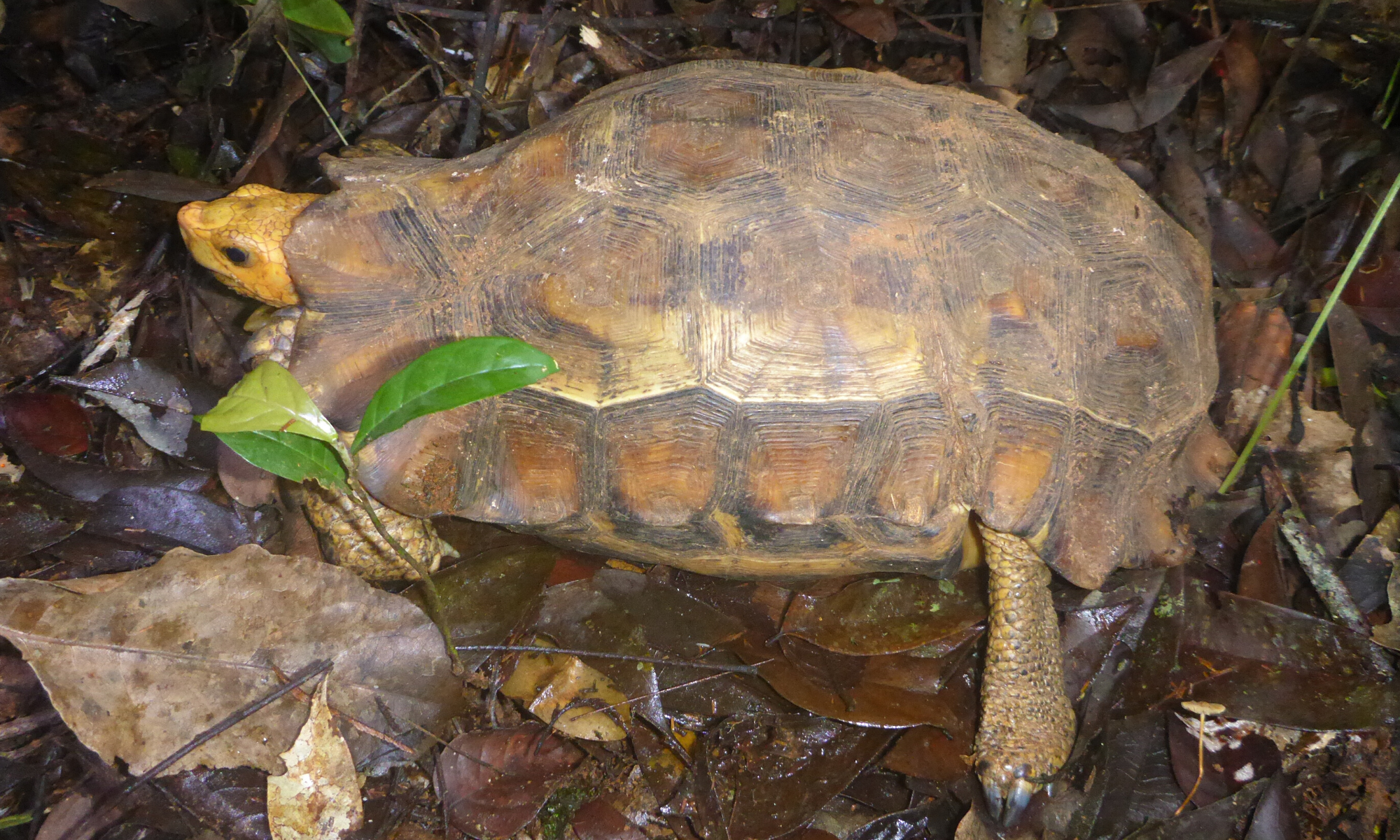 Home’s hinge-back tortoise has a highly effective defence against natural predators but is easy prey for humans. Credit: Joseph Doumbia/FFI

Although still believed to be widely distributed in Liberia, this forest tortoise has suffered unsustainable levels of exploitation in recent decades. At the height of the civil war, for example, it was one of the few readily available sources of protein for soldiers and for those fleeing urban areas to escape the conflict.

As its name implies, the dwarf crocodile is the world’s smallest crocodile. Nocturnal and less water-dependent than other crocodilians, it frequently falls victim to the bushmeat trade as well as to subsistence hunters. Both these reptiles are officially categorised as Vulnerable by IUCN.

Survey teams over the border in Guinea encountered a number of intriguing amphibians, including the Ziama toothed frog. Found in fast flowing streams, and therefore often referred to as torrent-frogs, toothed frogs derive their name from their curved upper teeth and the long teeth on their bottom jaw. As its common name suggests, the Ziama toothed frog has a very limited range in south-eastern Guinea, where it is confined to isolated mountains. 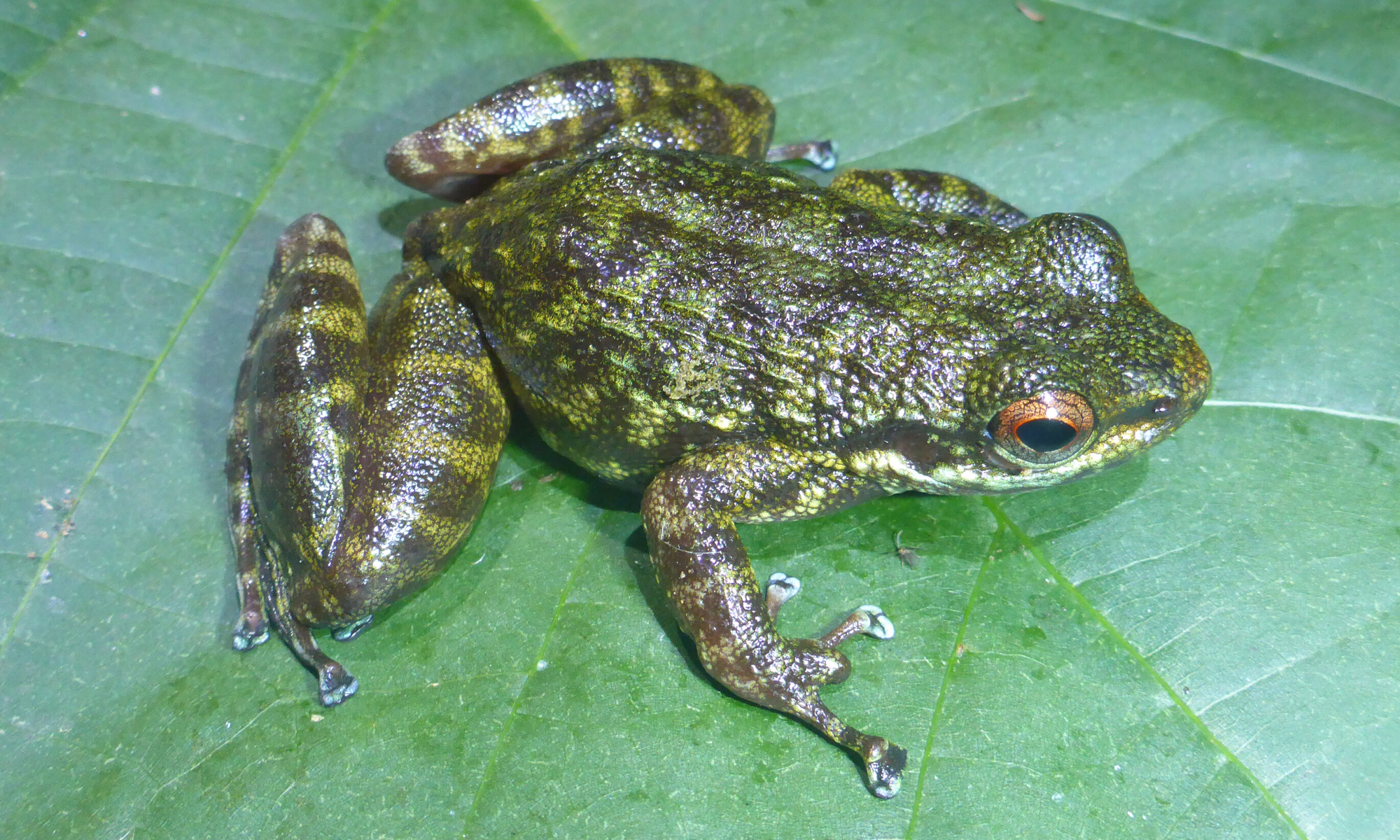 The Ziama toothed frog, one of the endangered species recorded by herpetologist Joseph Doumbia and his team of experts. Credit: Joseph Doumbia/FFI

Other notable finds included the western gecko – a prosaic and rather misleading name for a seriously endangered and geographically restricted reptile – and the harmless herald snake, a toad-eating specialist that appears to be wearing bright-red lipstick.

Transboundary cooperation and a wide range of expertise were vital to the teams’ success, and the fieldwork was gruelling but rewarding, as George Allison, FFI’s Biodiversity Officer in Liberia, revealed: “The rocky and mountainous terrain made the work difficult, especially the night surveys, and I also had to overcome the language barrier when I was over the border in Guinea. But it was a great experience working with brilliant researchers from diverse specialisms, and adding to our limited knowledge of the area’s biodiversity.”

The rapid surveys have provided a valuable snapshot of the herpetological riches hidden within these forests. It is hoped that they will spawn additional amphibian assessments, pave the way for reptile research on a larger scale and, most importantly, strengthen the case for protecting this West African wonderland.