The call of the peacock is a sound that travels. A mournful cry that seems as if it might originate from some large-eyed, dusky night-creature or perhaps a fairy tale prince, transformed by witchcraft into a bird, forever bemoaning his fate.

Years ago, on long summer evenings, the sound could be heard from a hill above the English village in which I was raised. The amphitheatre of fields caught the cries of peacocks kept in the garden of a large house a mile or so away, delivering them clearly to the listener. It is the perfect sound for such a regal and fantastical bird. No comical cockcrow from this lord of the pheasants, but an evocation of the East and all things mythical and exotic.

My childhood was full of peacocks. I saw them in the gardens of stately homes and in the glossy bird books I collected. There were also those local birds. I came to know their jewelled plumage intimately. Jewels have always brought out the thief in people and inspired the avarice to own; during the long summer holidays, my friends and I would walk down to the large house and slip through the hedge to dart secretly around the grounds and steal the discarded feathers.

The array of different feathers in a male peacock is astonishing: from the delicate spray of the crest, through to the gilded lunates of the back that precede the eye-covered tail. Only the milky brown primaries were dull; everything else was iridescent and marvellous. Over the years I collected every type. But an intimate familiarity with the individual form and colour of each one bred a kind of complacency, and I overlooked the sum total of the bird.

Survival of the sexiest

A couple of scientific facts to temper the poetry: peacocks are actually known as ‘peafowls’ (the ‘cock’ suffix refers only to male birds), and there are actually two species of peafowl. The blue peafowl from the Indian subcontinent is the most familiar, while the green peafowl of eastern Asia is scarcer and more threatened.

Something else to remember about peafowls is that they are not the outcome of human interference. Rather than the end product of selective breeding, they are the result of what is known as runaway sexual selection – when a particular feature used for attracting a mate becomes magnified beyond any practical use other than display – and sometimes even endangers the creature itself. The absurdly branched antlers of an old stag are another example.

Identical peafowls to those seen in the parks and gardens of England also exist in the wild. I first saw free-flying peafowls at the Taj Mahal in India, laboriously flapping into the trees at dusk to roost. I saw my first truly wild peacock in India, too, as it crept out of the forest to drink at a water hole. In Sri Lanka I watched them strutting unmolested through rice paddies, and in Cambodia (where peafowls have learned to be wary), I glimpsed a green peafowl scurrying away at my approach.

My great peacock revelation came one day in Vietnam with a green peafowl in Ho Chi Minh’s garden in Hanoi. They keep a single male bird there that displayed for me one morning.

Looking at it, I was suddenly overcome with amazement. 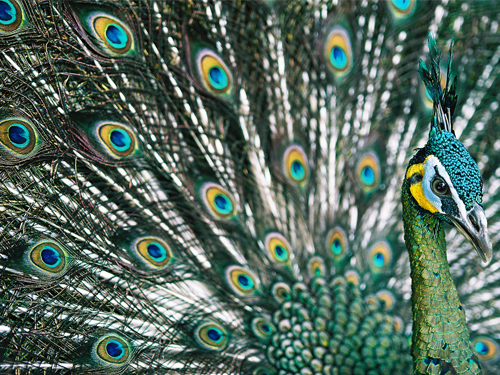 I knew these birds so well that I had forgotten just how incredible they actually are. Has a more wondrous bird ever existed? Imagine if peafowls had disappeared a million years ago – a victim of their own cumbersome plumage – and the only evidence we had for them was a pile of petrified bones. Archaeologists would piece them together and declare the bird was a large extinct pheasant. But who could begin to conceive of how that bird looked? Who would have the imagination to conjure up that fan of shimmering eyes?

And who could imagine what they would come to mean to us?

Familiarity, if not always breeding contempt, can dull us to the wonders of the world. Take a moment to think about the display of the peacock, or the slashed forest-shadow stripes of the tiger. They are a wild counterpoint to the uniformity that confronts most of us throughout our workaday lives, a rush that both calms and inspires us.

There is much talk in conservation circles about what it would mean to lose the tiger. What would it say about us as a species? The aesthetic argument always seems the weakest, the least practical, and the one that many conservationists avoid through a sense of guilt, perhaps. Talking about a creature’s important place in an ecosystem makes more conservation sense. But conservation is not only about protecting wildlife and landscapes; it is also about preserving our own place in the scheme of things.

An aesthetic appreciation of the wild form of animals is as central to us as modern humans as is the food we eat.

The cave of Chauvet-Pont-d’Arc proves this to us: on those dark walls, deep in the earth, our ancestors made the most accurate and inspired drawings of cave lions. What relationship they had with these lions is lost, but the admiration in those simple charcoal lines shows us that the aesthetic power of wild creatures was not lost on them.

The temple complex at Göbekli Tepe in Turkey (discovered in the same year as the Chauvet cave) is the oldest known religious site. It was constructed almost 12,000 years ago, and predates any city, but it shows the same thing – before they even had metal tools, these early architects and artisans carved an ark of animal species on huge stone stelae.

Whatever this bestiary meant for those people at the dawn of human civilization, it was important enough for them to go to extreme efforts to represent it.

Conservation is a complicated thing, and often a balancing act. But we should always remember our own deep history and relationship to other creatures. Whatever the politics or conservation fashions, there is a profound part of us that needs the aesthetic inspiration of animals.

Alas, it is easy to forget the beauty of familiar things, as the whispered hiss of feathers from Ho Chi Minh’s peacock reminded me.