Encounter with a leopard seal

One of the most striking memories I have from this year, and one that I know will endure, was seeing a leopard seal pirouette in the clear water underneath my boat. The boat was a Zodiac, a small inflatable craft used to ferry passengers from the ship to the shore – an unsettling platform for viewing a ten-foot predator with inch-long canines. Beautiful as the moment was, it caused me to reflect on the nature of close encounters with big predators.

I was on my way back to the ship after spending a few hours on Point Wilde in the Antarctic, the desolate strip of rocky shore where Shackleton’s men spent four long and hungry months waiting for rescue. Just off shore the skipper had spotted a leopard seal. Before setting out on the expedition I had hoped above all to see this mysterious animal, but felt far from certain that I would. The skipper told us it was a big individual, and that it was hunting. We stopped the boat and sat quietly scanning the water. Suddenly a group of penguins heading for shore began to porpoise frantically, spending almost as much time shooting through the air as they did underwater. When they hit the rocks there was a desperate scramble as they tried to get clear of the surf. The leopard seal hit them then, slithering up the rocks like a tube of water made flesh. It missed and melted back into the sea. 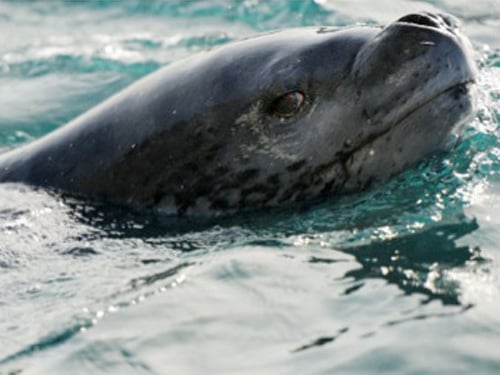 Without warning it suddenly came towards our boat, its head low but with its back arched out of the water, giving it the aspect of a sea monster. Was it curious, threatening, or irritated that we were there and spoiling its chance of a successful hunt? I had no idea.

In fact, until recently, no one was sure how leopard seals might react towards humans. One of Shackleton’s men was chased across the ice by a leopard seal, and one explorer had been bitten, but there was only one recorded fatal attack in which a snorkeling researcher was dragged down to her death. It was with much trepidation that the first wildlife cameramen filmed leopard seals underwater. The outcome was surprising: the huge seals appeared to either enact some underwater ballet or offer captured penguins in a gesture that seemed both friendly and intelligent.

I knew these facts beforehand, but when the animal’s head reared out of the water a foot from my own I felt extremely vulnerable in our flimsy rubber boat. It looked at me with huge glaucous eyes then sank back into the clear aqua sea. It was at this point that I looked down to see it pass beneath he boat, twirling gracefully like a ballerina fashioned from mercury. I thought to myself, ‘we need a bigger boat’.

Having checked us out, it began hunting again and had soon captured a hapless penguin. Without the use of hands the leopard seal must dismember its prey as a bird does, by flinging and shaking the corpse until it is manageable. For the next few minutes I watched this spectacle: the penguin finally rent to pieces in a spray of blood-spume. 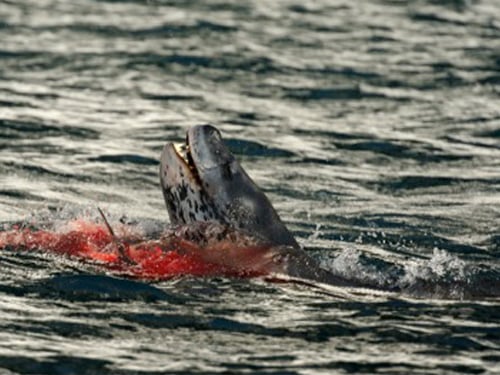 The hapless penguin was quickly finished off. Credit: Jeremy Holden

Once the penguin was dismembered and the blood-slick had faded, the seal emerged again beside the boat, rising up behind my colleague like a horror flick alien. He was fiddling with his camera and had no idea the slick reptilian head was only a foot from his own. I reached over and pulled him further into the boat, fearing in that moment that the seal might snap and pull him overboard. That was an instinctual fear, but probably an unfair one.

It has always perplexed me as to why humans are so seldom victimised by animals. Feeble and physically pathetic as we are, with our dim senses and slow reactions, it is amazing that we have got this far, seeming to engender, if not fear in the big predators, then some kind of respect. Why do leopard seals not rip a clumsy diver limb from limb? Why has there never been a human eaten by an orca? Why do the great baleen whales, so persecuted by our species, still seem intrigued and friendly when they meet us? Why in ten years tramping through the Sumatran rainforest alone did a tiger not eat me?

There are scientific answers to these questions. The two principle reasons are fear and unknowing (ignorance seems the wrong term). It is no coincidence that all of North America’s extant large mammals crossed over the land bridge at around the same time as humans beings. The moose, the bison, the elk and the bear all evolved alongside a dangerous bipedal ape – and learned to avoid it. North America’s endemic megafauna, the mastodons, Toxodon and Megatherium, those that developed on a continent innocent of homonins, were all wiped out soon after the arrival of human beings, having no knowledge, and consequently, fear, of this dangerous predator.

Similarly, it is possible that the reason the Komodo dragon still exists in Eastern Indonesia is because it learned to avoid humans, albeit the diminutive variety, Homo floresiensis, by sharing an island with them for a million years. A relative of the Komodo dragon, Megalania, once found in Australia, was not so primed. It vanished around 40,000 years ago, coincident with the arrival of humans on that continent. 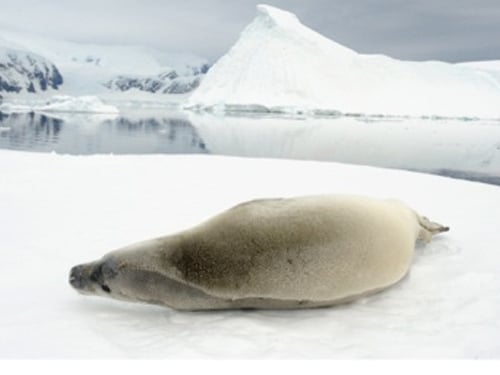 A crab-eater seal shows neither fear nor interest when I invade its iceberg. Credit: Jeremy Holden

I have witnessed both the fear and the unconcern large mammals experience when they meet humans. The first tiger I saw reared up like a horse to turn tail and run when we met head on along a logging trail; while the crab-eater seal whose iceberg I invaded lay as immobile as a doorstop while I photographed it from a few feet away.

Wild animals do sometimes kill human beings, but thankfully for both them and us it is a rare occurrence. I wouldn’t have dared slip into the water with that curious leopard seal, but if I had it probably would have offered me a penguin to dismember.